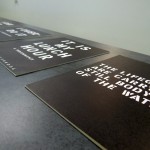 The Smithsonian American Art/Portrait Gallery Library has a dozen of Applebroog’s artists’ books in the collection. Applebroog self-published her series of cheap, black and white books in the 1970s.  They were printed in large runs of 400-500, though the idea behind each book originated from a unique art work in which she drew on and cut vellum panels of images and text. Applebroog mailed her books to friends, acquaintances and to other artists whose work she admired. In the 1960s and 70s, mail art, performance art and artists’ books were all becoming more popular means of creating and sharing art, and Applebroog took elements from each and combined them in her works. She has said she received a lot of hate mail from her books, and just as many people asking her to stop sending them as others requesting to be added to her mailing list.

Most consist of just a few pages stapled together, with the same simple cartoon-like image repeated several times, sometimes interspersed with inexplicable blank pages, sometimes with just a few words. They resemble flip books or film stills initially, but it is difficult to determine which part of the story is being portrayed. She gave each book the subtitle of “A Performance,” lending to the sense that the characters in her images were acting.

For example, the book “It Doesn’t Sound Right” shows a woman standing by a bed hugging herself, framed by a picture window. This image repeats nine times, interrupted on one page with the sentence “she says ‘YOU ARE KILLING ME’” and then again with “it doesn’t sound right” followed a few pages later by the final sentence in bold capital letters “NOBODY EVER DIES OF IT”. Who is “she” and which part doesn’t sound right, and nobody ever dies of what?!?

The window frame puts the reader in the position of voyeur, looking into a woman’s bedroom, but we don’t know who is talking or whom they are addressing. The stage feels like a hospital setting, but I realize that I may only be interpreting it as such after reading the last sentence. The images, though they are the same throughout each book, seem to take on new meaning after reading Applebroog’s inserted phrases.

Another example is “Say Something” in which a couple, a headless man and a nude woman, crouch on the floor, seen through a similar window frame. The image repeats over the pages of the book, broken up first by the question “Don’t you want me?” and later “Say something”. Characteristic of Ida Applebroog’s artists’ books, what the couple is doing is unclear and the narrator is again unknown.

And like so many of the artist’s other works, the action and words seem to fit perfectly, if uncomfortably, together.