The Renwick Gates in the Smithsonian Libraries 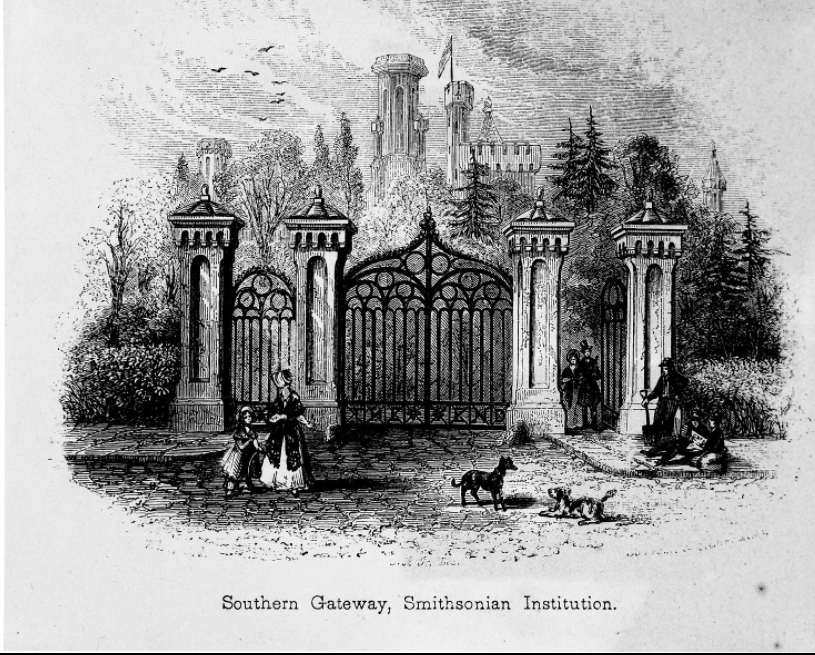 James M. Goode, former Keeper of the Smithsonian Institution Building (affectionately known as “The Castle”) received this year the Individual Lifetime Achievement Award for Excellence in Historic Preservation in Washington, DC. In a short biographical video for this honor, Dr. Goode references a guidebook in the Smithsonian Libraries as a key source in the creation of the Renwick Gates, one of his many accomplishments. Though his wrought-iron and red sandstone southern entrance way appears to be contemporaneous to the Romanesque Revival Castle (1847-55), Dr. Goode was only given the task of designing the gates in 1979 by then Secretary S. Dillon Ripley. Working in collaboration with architect John Blake Murphy of the Smithsonian’s Office of Design and Construction, these beloved carriage gates were part of Secretary Ripley’s plan to extend the museums’ mission outdoors, providing an essential transition from busy Independence Avenue to the soon-to-be-completed Enid A. Haupt Garden.

By the 1970s, the Victorian garden behind the Castle had become marred by temporary huts, sheds and a parking lot. The redesigned area that we now know and love, historically known as the South Yard, is essentially a rooftop garden at street level. Below ground are the Arthur M. Sackler Gallery and the National Museum of African Art; their pavilion entrances are unified in the campus-like setting with the center parterre of brightly colored flowering plants and garden “rooms” of Asian and North African influences along with specimen trees and shrubs. The Castle, the Freer Gallery of Art, the Arts and Industry Building, and the S. Dillon Ripley Center, along with smaller gardens, form the Quadrangle. The main entry to this tranquil square, an almost cloister-like space, is through the Renwick Gates.

The Castle was built from local Seneca sandstone, quarried upstream from Washington in Maryland along the Chesapeake and Ohio Canal and the Potomac River. Prominent geologist David Dale Owen (1807-1860) recommended the stone for the building in 1846. By 1979, however, the Seneca Quarry was a National Historic Park, and special permission was needed to provide a portion of stones for the four piers of the Renwick Gates to match the building beyond. The resourceful and diligent James Goode collected additional material from the demolished D.C. Jail and the under-renovation Sumner School in Washington, both originally constructed from Seneca Quarry stone. Master-stone carver and artist Constantine Seferlis realized the design, and the new permanent gateway was named for Castle architect James Renwick (1818-1895). Seferlis, who worked for decades on the National Cathedral, also helped with the restoration of the Castle’s façade and the statue of St. Dunstan, a gift of Westminster Abbey, who presides from a niche of the South Tower.

Aided by what was then the National Museum of History and Technology (now American History) library staff, Dr. Goode was able to reference various treatises to recreate the long-delayed plan for the Gates. One example is Hints on Public Architecture, Containing among Other Illustrations, Views and Plans of the Smithsonian Institution of 1849 by Robert Dale Owen, older brother to geologist David Dale Owen and member of the Smithsonian Institution’s first Board of Regents.  Renwick’s Oak Hill Cemetery gates in Georgetown provided an actual model for Dr. Goode to also draw upon.

In the years since Dr. Goode realized Renwick’s vision of a formal entrance to the Smithsonian, the Libraries has grown into a system of many branches, all of them providing an important repository of the Institution’s history. Included in Smithsonian Libraries’ collections are the records of the legislation that came out of James Smithson’s bequest to the country, guidebooks to the new Federal city like Bohn’s hand-book of Washington (1856) and Washington and its environs (1874), early directories of officers and staff, journals of the Board of Regents, exhibition and collections catalogs, histories of the museums’ buildings, as well as the former libraries of founding Smithsonian figures Joseph Henry and Spencer Fullerton Baird. The Renwick Gates, the modern embodiment of more than 100 years of Smithsonian traditions, stand in testimony to its creators and to the potential for inspiration in the Smithsonian Libraries.

The Arts and Industries Building of the Smithsonian Institution (1971) by James M. Goode.

Washington sculpture : a cultural  history of outdoor sculpture in the nation’s capital by James M. Goode.

A new view from the Castle : the Smithsonian Institution’s quadrangle (1987) by Edwards Park.

The Smithsonian Castle and the Seneca Quarry (2013) by Garrett Peck.

The Cultural Landscape Forum – The Enid A. Haupt Garden