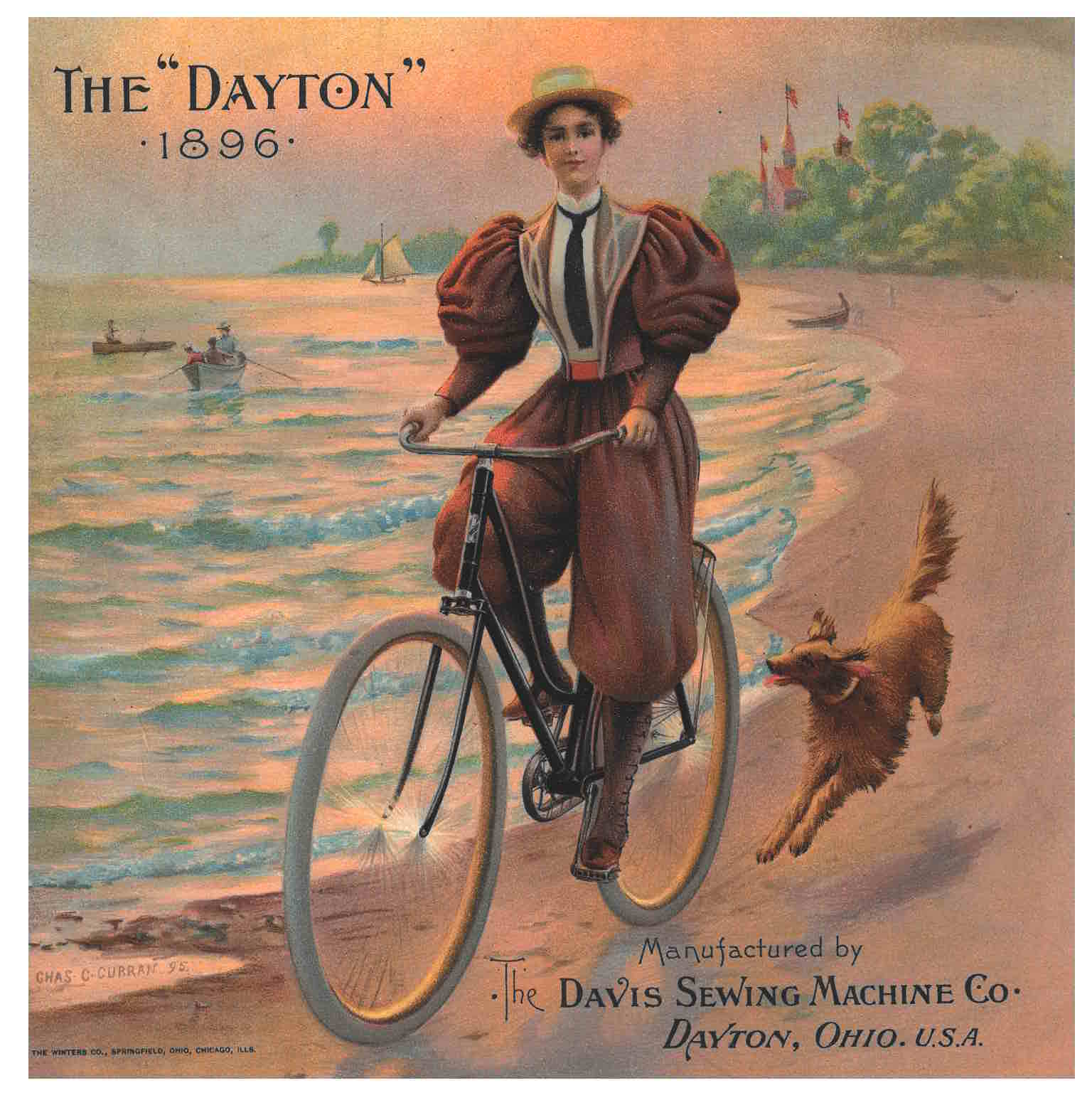 Recently, I stumbled across a trade catalog that made me pause. As I looked at its vibrantly illustrated front cover, I thought of relaxing, summer days at the beach. It shows a bicyclist riding along the shoreline, a dog following closely behind, and boats in the distance. I also noticed one more thing. The name of the company refers to sewing machines while the front cover illustrates a bicycle. That observation sparked my curiosity to explore the pages within this catalog.

It mentions that the Dayton Bicycle was not “the product of a new and untried establishment.” Instead, the production of this bicycle resulted from “a careful and comprehensive study” of both the methods and requirements necessary for manufacturing bicycles.

It also highlights that Davis Sewing Machine Co. had already been manufacturing machinery for more than 25 years. Based on the name of the company, the machinery being referred to is presumably the sewing machine. The Trade Literature Collection at the National Museum of American History Library also includes some of their sewing machine catalogs.

This particular catalog includes several pages providing technical information and details regarding the construction and manufacture of the 1896 Dayton Bicycle. Besides images of these models, it also elaborates on specific parts of the bicycle.

The Dayton Bicycle itself was described as having “graceful lines and beautiful design” and “combining extreme strength with perfect symmetry.” Scattered throughout the pages of this catalog are a variety of illustrations showing the bicycle in action with individuals riding in such places as the beach, park, or city.

A feature of the Dayton Bicycle was its wood rims, which according to this catalog, were constructed to prevent warping, splitting, or pulling apart at the joint. Reinforced with three layers of wood, it used both a dovetail joint and lapped joint. More details and an illustration are shown below. The rims were finished in either natural wood or stained.

As for pedals, the 1896 Dayton Bicycle was outfitted with either the Grothe Pedal or Brandenburg Pedal. The various styles for these pedals are illustrated below (right), including one for racing.

Moving further along, the catalog provides illustrations of several 1896 models. One of these is the Model C-Ladies’ Bicycle. Weighing 23 to 25 pounds, it was built with a frame measuring 20, 22, or 24 inches.

The Model H-Track Racer, shown below, was described as “the most rigid racing wheel on earth, absolutely no give under the hardest sprint.” Weighing 20 to 21 pounds with a 25-inch frame, it was designed for use on only tracks and not meant for riding on the road.

Other models include the Roadster and Tandem bicycles. The Model M-Single-Steering Tandem, built to accommodate two riders, is shown below (right). Weighing 40 pounds, its frame was available as a 23- or 25-inch bicycle. The Dayton Racing Tandem is shown below (left) and described as possessing graceful lines and a stiff frame. It is shown being ridden in what appears to be a race.

Just like the catalog begins, the back cover shows another vibrant illustration. This one is titled “An Elopement” and depicts a couple taking off on a Tandem, presumably a Dayton Tandem. Far in the distance, a horse and carriage speeds down the road towards them.

Dayton Bicycles (1896) and other trade catalogs by Davis Sewing Machine Co., including sewing machine catalogs, are located in the Trade Literature Collection at the National Museum of American History Library.