This is Part 2 of an interview. You can read Part 1, which ran yesterday, about how the library came to Washington, D.C.

Jody Mussoff, currently a Cataloger for the Libraries, worked with Librarian Anna Brooke from 1977-2001 at the Hirshhorn Museum and Sculpture Garden (HMSG) Library. Jody conducted this recent interview with Anna, tracing the history of the library and how it came with Joseph Hirshhorn’s art collection to Washington, D.C. The interview will be published in two parts, beginning today and concluding tomorrow.

Q. Was it difficult for you to make the transition from Greenwich, CT to D.C.?

A. We never worked in Greenwich. New York was the center of the art world and Washington D.C. seemed very slow and provincial by comparison. All our friends and contacts were in New York City; we missed New York. Mrs. Lerner, our director’s wife, would share bagels with us, imported from New York.

Q. Was the opening of the Museum in 1974 a grand experience?

A. There was a lot of excitement, press, parties, clean new offices, a growing staff, and the adjustment to the Smithsonian bureaucracy. Bill Walker, Librarian of the NCFA, was a great mentor, endlessly patient and helpful. He assisted me in planning the layout and the furniture for library with Joyce Blum from the architectural design firm of Skidmore, Owings and Merrill.

Q. What kind of cataloging system did you have for the library, both in Greenwich and then in D.C.?

Q. How fast did the library collection grow, once the Museum opened to the public?

A. I do not have figures to compare the growth rate after 1974; library growth fluctuates depending on budget, space and gifts.

Q. What is the collection policy for the library and has this changed over the years?

A. The collection development policy has always been to support the research of the museum staff members, both for exhibitions and for the permanent collection. In New York, before 1974, we had only the permanent collection research to support. The art collection has changed over the years from paintings, sculpture and works on paper, to include video, photography, films and installation art. The Washington Art Resources Committee (WALRC) was formed by Bill Walker, Chief Librarian, NCFA/NPG, and the National Gallery’s Library Director, Mel Edelstein, to cooperate with Library of Congress and other art libraries in the Washington area when purchasing expensive books. Now I try not to duplicate books already owned by AAPG Library.

Q. Can you describe the origin and growth of your exchange program?

A. Gift books have always been sent to our curators and director. In 1974 we began our exchange program based on the advice of Bill Walker. We kept records on index cards, but later when we needed software we moved onto Dbase 3. In 1999, with the help of Karen Cassedy, National Gallery of Art Library, we moved the database onto Filemaker Pro software. Later the program to transfer to Access was written by Keri Thompson, from the Libraries.

Q. The Museum has had several directors over the years. How do you think the Museum and its art collection have changed because of them?

A. Our first Director, Al Lerner, was hired by Joe Hirshhorn and was his curator and friend. Al was an artist, and a very warm, fatherly man. I don’t think the art collection changed very much until the arrival of James Demetrion, our second director. He had been Director of the Des Moines Art Center and wanted to make the museum a national collection of modern and contemporary art. He began the de-accessioning program and transferred the Eskimo, African, Pre-Columbian, Cycladic, Islamic and Asian works to other Smithsonian museums. Ned Rifkin, and later, Olga Viso, embraced the trends in contemporary art, adding photography, film and video to the collection and exhibition program. The current Director, Richard Koshalek, is active in international cultural programs that bring artists and the public together in dialogue. His priorities include transforming the lobby into an education space and bringing conferences to the proposed temporary inflatable addition that will fill the interior of the building’s elliptical shape. 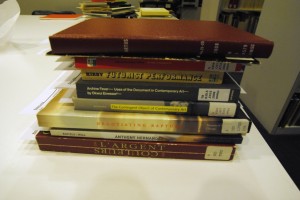 Q. How do you think the library has transitioned over the years, with the change of directors, the growth of the collection, the emergence of the computer, and finally, the merge with the entire Smithsonian Libraries?

A. Computers, shared cataloging, and online databases have increased access. The museum visitors have also become more interested in contemporary art since 1974. We received a grant to preserve and make digital audio copies of 306 archival audio tapes dating from 1969 to 2004. They include interviews of artists and Hirshhorn Museum auditorium programs that will be made available to Libraries’ researchers.

Q. Who uses your library now, and how do you think you can improve upon its usefulness in the digital age?

A. The library is used by Smithsonian staff, scholars and visitors and ILL borrowers. We are limited in our ability to digitize contemporary art material because of copyright law. We are also limited in what we can lend because many exhibition catalogs, printed in small editions, are irreplaceable. We catalog small publications and often scan them for users when they cannot be loaned.