Celebrating the Life and Contributions of Charles Davies Sherborn

On October 28, 2011, NHM, London, in collaboration with the International Commission on Zoological Nomenclature, the Society for the History of Natural History and others, hosted a symposium, "Anchoring Biodiversity Information: From Sherborn to the 21st century and beyond,” honoring the 150th anniversary of the birth of Charles Davies Sherborn. Sherborn, 1861-1942, played a critical role in the biodiversity world by being the first to successfully index every living or extinct animal discovered and documented between 1758 and 1850. His greatest work, Index Animalium, took over 43 years to complete but is still referred to by taxonomist around the world. The one-day event, held at the Flett Theatre at the Natural History Museum, London, celebrated the incredible achievements of Sherborn and the ramifications for taxonomic research yesterday, today, and tomorrow.

The Smithsonian Libraries presented at the symposium with Suzanne Pilsk, metadata librarian, giving a talk and Grace Costantino (Digital Collections Librarian for BHL) and Leslie Overstreet (Curator of the Joseph F. Cullman 3rd Library at SIL) presenting a poster.

SIL’s Suzanne Pilsk explained the role Smithsonian Libraries has played in bringing the critical work Index Animalium out of the library and off the page with a talk titled “Unlocking the Index Animalium: From paper slips to bytes and bits” (pictured above). Pilsk represented the work done to date by SIL staff, interns and volunteers to create an online version of the work. Smithsonian Libraries’ goal was to provide better access to the Index than was previously available and connect the researcher to the level of information needed. Over the span of years, staff has evolved the project from the initial vision of discovering where the text was located within the library walls, to linking to the scanned text via BHL. 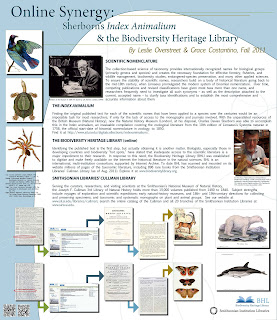 The poster presented by Grace Costantino and Leslie Overstreet, entitled “Online Synergy: Sherborn’s Index Animalium and the Biodiversity Heritage Library,” delved into the link between SIL’s online version of Index Animalium and the digitized volumes within BHL. SIL’s online version of the Index Animalium allows researchers to search the entire multi-volume work by name, epithet, or other keyword. With the citation thus provided, researchers can then access the cited text itself on BHL, finding not only the species citation but, in many cases, remarkable illustrations as well.

The talks and posters from the symposium can be viewed here, and to find out more about the incredible life of Charles Davies Sherborn, take a look at the feature on him and the symposium in The Telegraph. You can also view photos from the event on Flickr.

Learn more about us and our collections.
END_OF_DOCUMENT_TOKEN_TO_BE_REPLACED