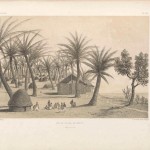 From 1836 to 1848, successively in command of the corvette “La Prévoyante,” “La Dordogne,” and finally the frigate “Le Ducouëdic,” Charles Guillain (1808-1875) navigated the Indian Ocean from the Cape of Good Hope to the western coast of the Indian sub-continent.  During his several missions he accumulated extensive knowledge on Zanzibar, Madagascar, the Comoros, as well as the Swahili and Somali coast of Africa.  Accounts of these expeditions were all published and gave this St. Simonien a solid reputation of ethnologist and geographer.  Yet a certain degree of confusion remains of the political and commercial purposes of his ambitious campaigns of exploration, influenced by personal convictions, regional aspirations, and France’s global interest in the region.

END_OF_DOCUMENT_TOKEN_TO_BE_REPLACED

2014 marked the 50th anniversary of the establishment of the Smithsonian American Art and Portrait Gallery Library (AA/PG) as a combined library for the newly-founded National Portrait Gallery and the National Collection of Fine Arts.

END_OF_DOCUMENT_TOKEN_TO_BE_REPLACED

From March  16th-20th, the Smithsonian Libraries hosted five students from the University of Kentucky School of Library and Information Science as volunteers for Alternative Spring Break 2015.  Anna Gault, one of the spring break interns, shares her experience below.

END_OF_DOCUMENT_TOKEN_TO_BE_REPLACED

On March 22-29, I traveled to Panama and the Smithsonian Tropical Research Institute (STRI) with members of the Smithsonian’s Science Executive Committee. This is the science unit directors group who meet with the interim Undersecretary for Science each month. Others on the trip were Scott Miller, the Office of the Undersecretary for Science (OUSS) staff, Cynthia Brandt Stover, Smithsonian Campaign Director and Jenny McWilliams, Science Advancement Officer. Oh yes, and Stacy Cavanaugh’s 12-year-old son.