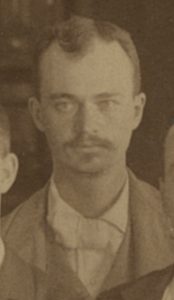 From May 13-20th, the Smithsonian Libraries is participating in the #DigIntoDyar campaign – encouraging the public to transcribe the field books of this remarkable entomologist in the Smithsonian Transcription Center and to learn more about his life and work. This post was written by Marc Epstein, Research Associate at the National Museum of Natural History and author of Moths, Myths and Mosquitos:The Eccentric Life of Harrison G. Dyar, Jr.. On May 17th, you can learn more about Harrison Dyar with our Google Hangout with Marc or in person during his Smithsonian Associates lecture.

Like many scientists in natural history fields, a hobby became Harrison Dyar’s profession. Although his undergraduate degrees were in chemistry at MIT (1889) and a doctorate in bacteriology from Columbia (1895), his passion was collecting moths, rearing their caterpillars, and exchanging or purchasing Lepidoptera (moth and butterfly) specimens.

In 1890, at 24, Dyar developed what has become known as Dyar’s Law of Geometric Growth. In order to grow in size, animals with external skeletons (exoskeletons) need to shed their cuticle. Upon noticing discrepancies over published life histories of the same Lepidoptera species, Dyar realized that heads of caterpillars were fixed within each stage, so by making a ratio between successive stages he could predict what the width of other stages would be. This method has since been used many thousands of studies as practical tool. 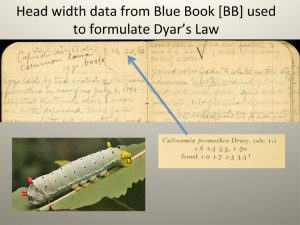 His master’s work on the classification of Lepidoptera at Columbia (1893-1894), much of which stands today, along with his extensive knowledge of caterpillars is what led to his move to the Smithsonian Institution in 1897, at the invitation of L.O. Howard, the curator in charge of the nation’s insect collections. He would remain for the rest of his life, first writing a major catalogue of North American Lepidoptera in 1903, in many ways a wish list he used to build the collection. In the early 1900s Dyar, in collaboration with Howard and Frederick Knab began making major contributions to our knowledge of mosquito classification, much as he did for Lepidoptera. He would name over 3,000 species of insects. Unfortunately, mythic battles with his peers have left Dyar’s major contributions largely forgotten.

In  June 1882 Harrison Dyar began recording notes on butterflies and moths in a small blue diary from 1876 that his mother had scarcely written in (the days and dates corresponded, so he crossed out 1876 and wrote 1882). He continued the notes in a series of over 20 larger notebooks, ones used for running the home in Linwood Hill, NY by his mother Eleonora Rosella Dyar and later his wife Zella Peabody Dyar in New York City and for a summer visit to Linwood Hill.

Although Dyar had a system of blue book numbers for entries, they were not always chronological because he would sometimes go back and append the entries.  Dyar eventually filled the book with field entries from other years, so one can see the change of handwriting and style in the one notebook (last entries in 1889). There are notes in the blue book that suggest earlier notes or other notes that may have been copied into the notebooks we have today. The final entries in Dyar’s blue book series were in June 1906 during a trip to California, on which he was accompanied by A.N. Caudell. All of the notes refer to his rearing of mosquito larvae.

Dyar’s ‘catalogue’ of 39,000 entries is a record of pinned Lepidoptera specimens (adult stage) that he acquired between 1885 and 1913, either from his own collecting or rearing, purchase at auctions or from sellers, exchanges, or donation. Around 1897 Dyar began copying entries dating back as early as 1885 from other notebooks, probably no longer extant. The 1897 date is based on the fact that the early pages are stamped “Dr. Dean 1897.” Bashford Dean, an expert on embryology and paleontology of fishes, was a professor at Columbia University when Dyar was there as a student and faculty. Dyar cross-referenced specimens from the Blue Books in the catalogue that had become adults, which caused confusion by later researchers because they didn’t realize this. For example, he had moths emerging from Rhinebeck, New York while he was in Hawaii in 1892.

BB### = blue book entry numbers
Out = emergence on a particular date of an adult moth or butterfly from a pupa, date included
Copied with a date = often suggest that the note was published, sometimes indicating in what scientific journal
Blue squiggle or red check = copied and published
Ratio (R) = ratio of head widths of caterpillars

You can try your hand a deciphering Dyar with these bluebooks, currently available for transcription in the Smithsonian Transcription Center: