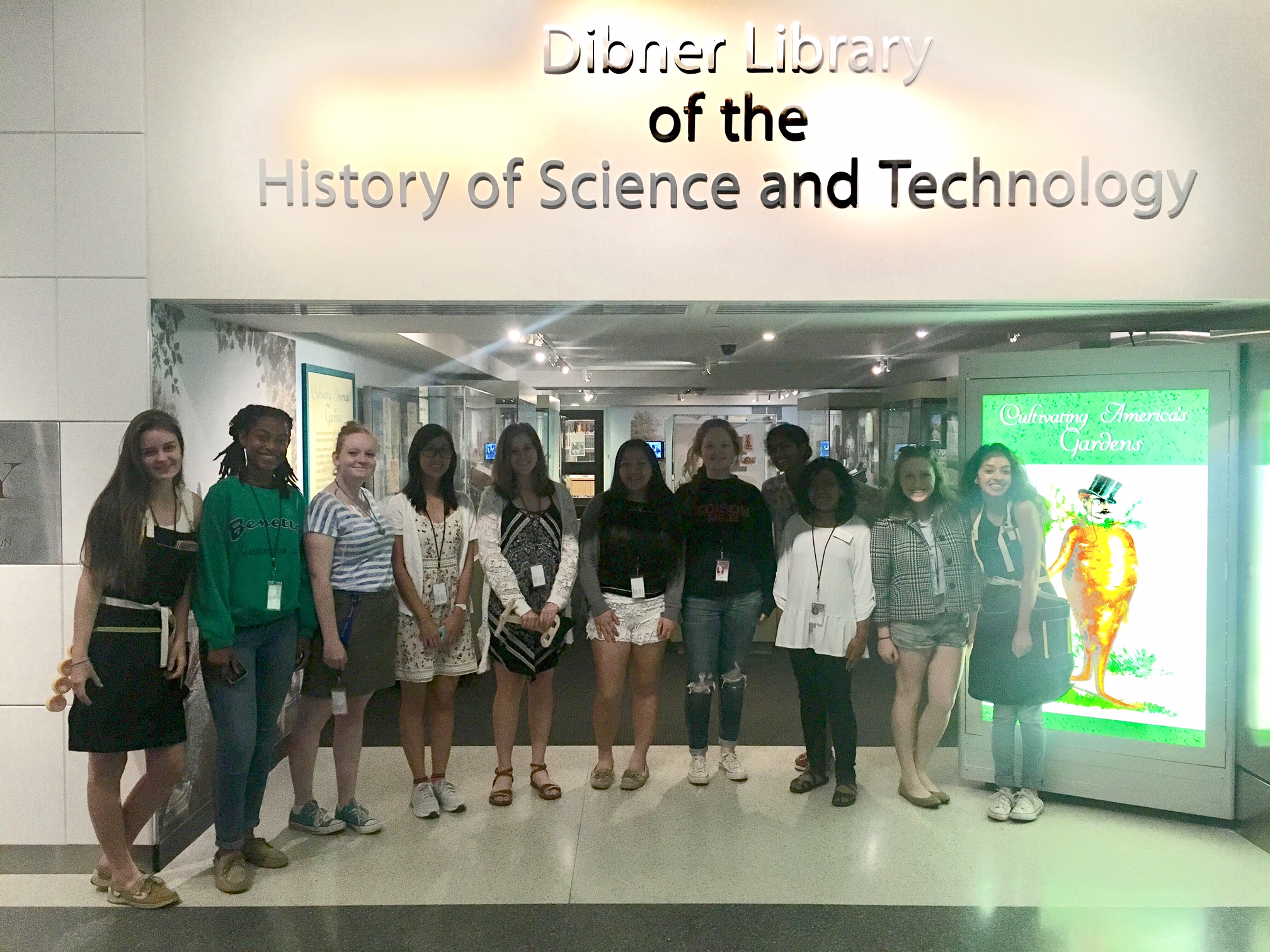 This post was written by Abigail Espiritu, a summer intern focusing on social media and the Libraries’ blog. This fall, Abigail will be entering her freshmen year at the University of Maryland where she will be majoring in journalism.

The program was brought to fruition by the Smithsonian Libraries’ education specialist, Sara Cardello. When asked about how she came up with the idea for the new program, Cardello said, “I’m running a teen council [applications open now for Fall 2017!] throughout the year and I had a lot of interest from students that just couldn’t really make it during certain time slots. I’ve been impressed with the caliber of students that have come into the teen council so I was thinking, is there something else I can do that might be for a more open audience? I also at the same time was thinking about our new exhibition opening and ways to interact with it and add interpretive elements to it. So, I came up with the idea of having an opportunity for the summer with the teen docent program.” Thus, the program began to form.

Cardello had to go through a number of tasks to ensure a prepared group of young individuals would be successful docents. It began with the application process. Applications opened in March and about fifty total applications were received. Sara was looking for a group of teens from local schools. After interviewing the candidates, eleven teens were selected to be the first docents for the summer.

A forty-hour training session was held throughout the last week of June to prepare the teens to be able to interpret the gallery. A curators of Cultivating America’s Gardens, Kelly Crawford, came in to give the teens more background information about the exhibition they would be working in. The docent team at NMAH, who interpret the entire museum, also assisted during the teens’ training week. They provided skills and knowledge to the teens by giving the teens tours and demonstrating what the job would entail. After training week, the teens signed up for their shifts and then were off to staff the exhibition.

The docents are posted at the entrance of the exhibition with multiple props, including cookbooks, seed catalogues, garden scents, and a stereoscope, all to engage visitors. Ami Wong, one of the docents and a rising senior at a local Maryland high school, describes her experience so far, “We work in two hour shifts. Most of what we do is trying to get people into the exhibit. I remember Sara saying part of why they hired us was because the exhibit is not very interactive. So, they wanted us to do interactive things with the guests. We wear aprons with a ton of stuff in them and we have a stereoscope as well. So I show the guests some of the items and ask them to guess what they are or try them out, and if people seem interested I’ll give them a short tour.”

The program has allowed the teens to not only gain experience, but also open their minds to possible career paths within the Smithsonian Institution. When asked about if the docent program had influenced possible career pursuits, Wong said, “At first it didn’t, but having done training week and just working already I feel like that’s something that might be viable for me in the future. I went into it because I also want to improve public speaking, and I like interacting with people. Now having done it, I’ve been thinking about it, maybe going to the Smithsonian in the future.” Sara Cardello encourages her young group and aims to expose them to the broad scope of careers that are in the museum or library setting.

The docents will continue to work in Cultivating America’s Gardens until the end of the summer season. If the public response is good and the teens feel like visitors are enjoying the program, Cardello may continue the program into the future, particularly on weekends in the fall.