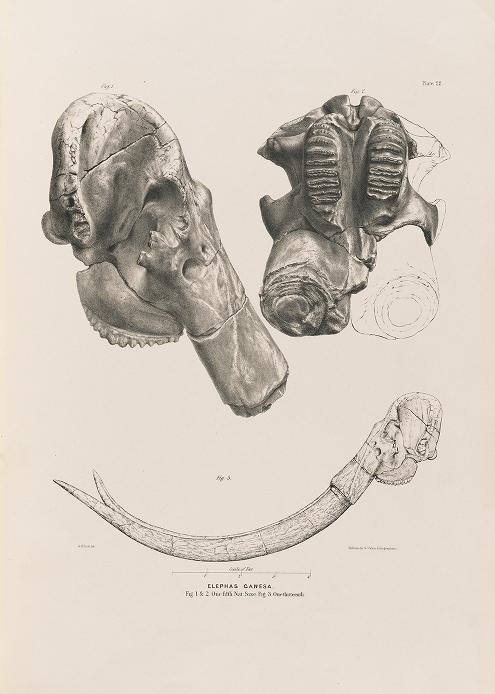 This blog post is part of a series from Smithsonian Libraries highlighting Unearthed, a new collection of paleobiology literature in Biodiversity Heritage Library curated by Smithsonian Libraries in celebration of the opening of the National Museum of Natural History’s David H. Koch Hall of Fossils – Deep Time exhibit. Follow the series throughout 2019 as Smithsonian scientists and librarians discuss the collection, identify their favorite books within it, and explain the importance of paleobiology literature in research today. This post was written by Advait Jukar, Peter Buck Fellow in the Smithsonian National Museum of Natural History’s Department of Paleobiology.

I’m a Deep Time – Peter Buck Fellow in the Department of Paleobiology at the Smithsonian National Museum of Natural History where I study the ecology and evolution of prehistoric vertebrates, especially fossil mammals from the Indian subcontinent. The Indian subcontinent has one of the richest mammalian fossil records anywhere in the world. The Siwalik Hills, and surrounding regions in Northwest India and Pakistan have a fossil record ranging from about 23 million years ago to about half a million years ago making this region an ideal place to study how mammalian communities have changed through time.

Fossil mammals in India were first discovered by British explorers and naturalists in the 1830s and 40s. Hugh Falconer, Proby Cautley, W.E. Baker, and H.M. Durand discovered one of the largest deposits of fossil mammals from the Pliocene and Pleistocene (3.6 million years to 0.6 million years) in the region between the rivers Yamuna and Sutlej. These fossils eventually made their way back to the Natural History Museum in London, and form one of the most important fossil collections in the world. These collections form the basis of my research on the reassessment of the taxonomy of fossil mammals from India, the biogeography of South Asian mammals, and paleocommunity change.

Understanding the taxonomy of a particular group in the fossil record (the basis for any study on diversity, biogeography, ecology, etc.) requires a review of the various species that have been named. A species is named when a scientist determines that a particular specimen is different enough from other species. This specimen is then classified as the holotype, or voucher specimen for the species. When a new fossil is found, or additional comparisons are made, some described species are determined to be synonymous, and therefore cease to be valid, or sometimes more than one species is found lumped together under the same name. Therefore, revisory studies require an expansive review of the literature, especially the descriptions of the holotypes.

Despite the excellent fossil record, mammals from India have received comparatively little attention from paleontologists in the past. So, to understand the diversity of fossil mammals in the collection, I had to go back to the original papers and books where they were described. In many cases, the species were named by Falconer, but formally described several years later by Richard Lydekker. Lydekker was a staff member with the Geological Survey of India from 1877-1881, and thereafter came to work at the Natural History Museum, London in 1882. There, he compiled catalogues of fossil mammals, reptiles, amphibians and birds for Henry Woodward, the then Keeper of Fossils at the Natural History Museum. These catalogues are the first formal descriptive documents on Falconer’s Siwalik fossils and extremely important for any student of fossil mammals. Lydekker also assigned what are known as lectotype specimens for many of the species (the name given to one specimen from a collection which is to be used as a voucher when a holotype has not been designated). Any taxonomic revision would now require a firm understanding of the lectotypes, other specimens referred to that species, and the original description.

These catalogues (Catalogue of the Fossil Mammalia in the British Museum and Catalogue of the fossil Reptilia and Amphibia in the British Museum by Lydekker) and are housed in the Vertebrate Paleontology Library at the National Museum of Natural History, and have been digitized by the Biodiversity Heritage Library. They have become an invaluable resource for me in my research. I used the books as a reference to identify key specimens for comparison, and used them to revise the taxonomy and biogeography of three-toed horses in the Pliocene of India. I am currently using the catalogues to sort out the taxonomy and diversity of proboscideans from the Pliocene and Pleistocene of the Indian Subcontinent. In addition to these catalogues, Smithsonian Libraries also has copies of the Palaeontologia Indica Series X, where Lydekker described many other Siwalik species from specimens housed in the collections of the Geological Survey of India in Kolkata, the Fauna Antiqua Sivalensis, the book of Plates that Falconer and Cautley commissioned to illustrate their collection of Siwalik fossils, and Charles Murchison’s Palaeontological Memoirs of Hugh Falconer, which is a collection of Falconer’s notes and papers on the Siwalik fauna, among other related discoveries. These scientific journals and books have made my research possible, not only for my dissertation, but also for other projects that I have since embarked upon.