Just in the nick of time at the end of Martha’s centennial year, a resolution passed the Senate on December 17 calling attention to the 100th anniversary of the extinction of the last known passenger pigeon. Senators Sherrod Brown (D-OH) and Rob Portman (R-OH) reported the passage, which was the final act of the 113th congressional session.

END_OF_DOCUMENT_TOKEN_TO_BE_REPLACED

Remembering Martha: A recap of our Twitterchat

On September 2nd, 2014, the day after the 100th anniversary of the death of Martha, the last passenger pigeon, the Smithsonian Libraries , National Museum of Natural History (NMNH) and Biodiversity Heritage Library (BHL) hosted a twitterchat in honor of the beloved bird. The chat featured Helen James, Curator in Charge of the Division of Birds at NMNH and Martin Kalfatovic, program director of BHL, who contributed for their respective organizations.

END_OF_DOCUMENT_TOKEN_TO_BE_REPLACED 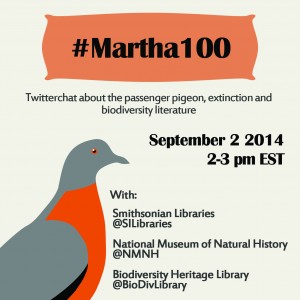 Please join the Smithsonian Libraries, the National Museum of Natural History (NMNH) and the Biodiversity Heritage Library (BHL) for a twitterchat on September 2nd. The chat will take place between 2-3 pm (EST) and feature Helen James, Curator of Birds and our recent Once There Were Billions exhibit in NMNH, and Martin Kalfatovic, Program Director of the Biodiversity Heritage Library.

END_OF_DOCUMENT_TOKEN_TO_BE_REPLACED

Our Instagram followers (we’re @SILibraries) may have noticed some extra ornithological action in our feed recently. “Martha”, an origami passenger pigeon, has been in the spotlight the last few Mondays.