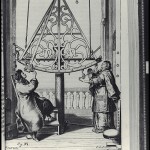 On June 5 and 6th, much of the world will be able to catch a glimpse of the planet Venus traversing across the face of the Sun. The “Transit of Venus” occurs when the planet passes between the Earth and the Sun, a rare occasion that has happened only seven times since the year 1600. Many folks in the modern era will have a chance to witness this remarkable occurrence twice in their lifetimes, as the last Transit occurred in  2004.

In the 1700s, astronomers began to attempt the use the Transit of Venus as a way to measure the distance from the Earth to the Sun. Using surveying methods, they believed that by comparing the different times of the start and/or end of the Transit of Venus from various locations on Earth, they could calculate the Earth-Sun distance, or astronomical unit, AU.

In North and Central America, as well as Northern parts of South America, the Transit may be observed at sunset on June 5th. In other parts of the world, it will be seen at sunrise on June 6th. Consult this NASA map for a more detailed view of where and when the event may be seen. For those in the Washington, D.C. area, the National Air and Space Museum will host an observation on the National Mall at 8 pm on June 5th.