Not for the faint of heart: De humani corporis fabrica 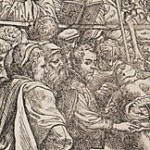 Today, Halloween, is traditionally marked with bats, pumpkins, ghosts and of course, skeletons. In the 1500’s, one man changed the way the medical world saw the skeletal and muscular systems of the human body. That man, Andreas Vesalius, illustrated anatomical features in his De humani corporis fabrica (On the structure of the human body) in a way never before seen. Although the pages below may seem gruesome (fair warning, gentle readers!), they come from one of the most influential anatomy books of all time.

Born in Brussels in 1514, Andreas Vesalius came from a family of doctors and apothecaries. When he became a physician himself and began teaching medical school in the 1530’s, most of the standard texts were based on animal dissections and the observations of an ancient Roman doctor named Galen. Vesalius took the unconventional step of performing dissections live in front of his medical students and using human bodies (like those of deceased criminals!).

In 1543, he published De humani corporis fabrica, with wood-cut illustrations of human dissections. But the bodies weren’t just laying still, as if on a mortuary slab. They were posed, with various layers of tissue artfully falling away. The book is considered one of the first anatomical works, showing and describing various systems in the body.

The Smithsonian Libraries has one copy of the first edition of the book, published by Johannes Opirinus in 1543, in the Dibner Library of the History of Science and Technology, a gift from the Burndy Library. It was considered by Bern Dibner to be one of the 200 “Heralds of Science”, as the first truly accurate depiction of the human body in medical texts.

You can flip through the National Library of Medicine’s copy, with annotations, here:

Or see the progress of a Northwestern University project to translate the work in English here: