Publishing, Pretense, and Pigeons: The Case of Madame Knip

This post was written by Alexandra K. Neuman, library technician in the Joseph F. Cullman 3rd Library of Natural History. 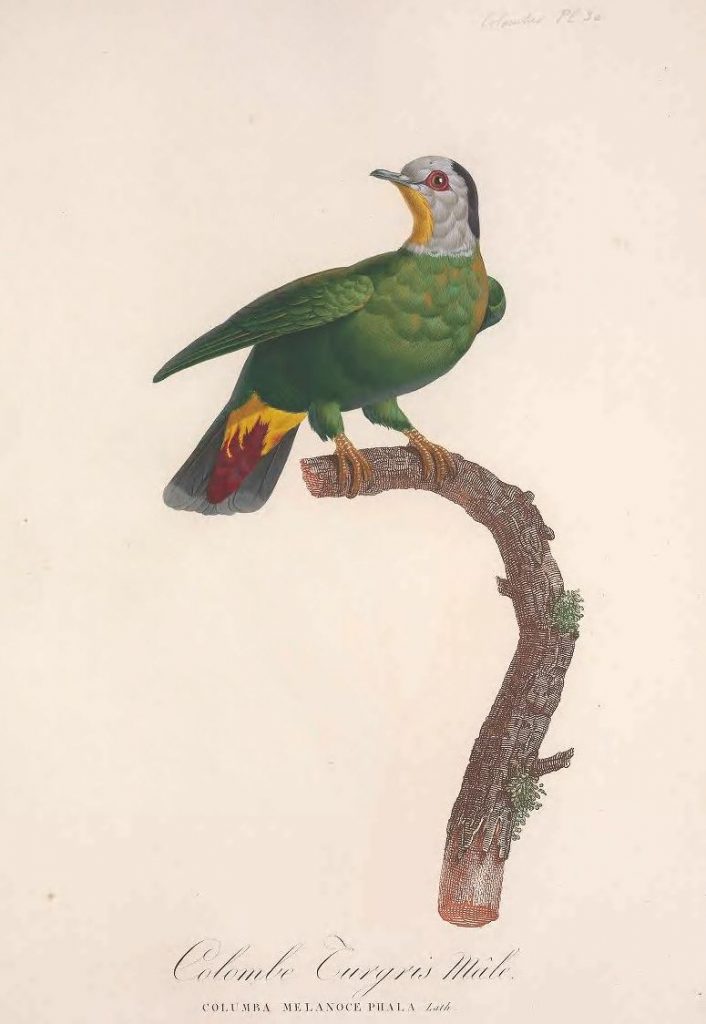 The pigeons most of us are used to seeing—the ones that suddenly appear out of nowhere and descend upon a dropped bit of food—are often various shades of grey, some with touches of brown. No drama.

However, different breeds of pigeon can be very dramatic indeed—as can scholarship about them. Such is the case of the production of Les Pigeons, which resulted in a scandal that shook up not only the world of natural history publishing, but the very practice of pigeon taxonomy.

At first glance, the title page of the Smithsonian Libraries’ copy of the second edition of Les Pigeons seems innocuous. Madame Knip, nee Pauline Courcelles, is listed above her apparent co-author, C. J. (Coenraad Jacob) Themminck (or Temminck). Only with some historical background does this arrangement of names begin to seem odd. Temminck, one of the foremost ornithologists of the early 19th century,[1] appears to have merely contributed the text to a work by Knip, a talented but not particularly prominent artist. Was Temminck doing a favor for a friend in supplying the text for this work? Or did he simply like Knip’s work so much that he didn’t mind playing second fiddle on the title page?

The simple truth is that Temminck didn’t know he wasn’t getting top billing in the work; in what later authors would call “a piece of truly feminine finesse,”[2] Knip actually altered certain aspects of Les Pigeons while it was still being published in order to make it appear that she had a much larger hand in the work. Actually published in Paris in 15 livraisons (or parts) over the period between 1808 and 1811, personally overseeing the process would’ve torn Temminck away from his home and work in Leiden numerous times. In order to make the process more efficient, Temminck allowed the engraving of the plates and the subsequent color printing to be supervised by Knip,[3] and likely also used her to liaise with the work’s printer.

Knip came highly recommended to the project, with Georges Cuvier and Bernard Germain de Lacépède[4] both vouching for her artistic talent. Her watercolors had also been shown at a Salon in 1808, cementing her reputation as a professional. Her artistic talent was, however, surpassed by her ambition; after winning a gold medal at an 1810 exhibition, she was presented in court to Napoleon’s second wife, the Empress Marie Louise. It is likely that this event motivated Knip to make her alterations to the content of the book in 1811, when the final livraisons were released. The method of printing books in livraisons meant that things like the title page and the table of contents were released in the final parts; this allowed authors to add and edit portions of the work along the way, and to have those alterations be accounted for. However, Knip used her supervisory status to give her name more weight on the title page, and also removed Temminck’s entire introduction to the work, while adding her own dedication to the Empress. Unfortunately, a listing for the introduction still managed to make its way onto the table of contents—Knip wrote this off as a “printer’s error.”

The book that Knip claimed as her own, dedicated to Marie Louise, was enough to net her the title of “Premier Peintre d’Histoire Naturelle de S. M. l’Impératrice Reine Marie-Louise,” as well as a healthy stipend. Temminck, though, received no such praise. Knip went so far as to send Temminck several copies of the finished work with his introduction still intact and his name taking precedence on the title page, with Temminck none the wiser of her deception until he visited Paris in 1812. But, despite the fact that he wished to publicize the deception and get credit for his work, Temminck found no sympathy from the press; they were loath to smear Knip’s name when she clearly had the ear of the Empress, and by connection Napoleon himself. Temminck was eventually forced to accept the theft of his work, although he managed to slip in a reference to the affair in his 1815 book Histoire Naturelle Générale des Pigeons et des Gallinacés.

Far from being the end of the issue, the drama of the publication of Les Pigeons only carried on into the field of taxonomy. The International Code of Zoological Nomenclature’s principle of priority states that “the correct formal scientific name… correct to use, is the oldest available name that applies to it.” The “oldest available name” means the first published instance of an animal’s scientific name, and citing that name requires identifying the author that named it. Indeed, several new species were named in Les Pigeons; but should taxonomists cite Knip or Temminck as the originator of the names? It was not until E. B. Coues wrote an article on the issue in 1880 that taxonomists settled on citing Temminck instead of Knip.

It is unfortunate that Madame Knip is now better remembered for her “sundry alterations”[5] to Les Pigeons than for her beautiful art. But perhaps her story of pigeon-based subterfuge will make you consider your grey feathered friends in a different light!

You can view both volumes of the second edition of Les Pigeons here on BHL.

[1] Gasso Miracle, M.E. 2008. “The significance of Temminck’s work on biogeography: Early nineteenth century natural history in Leiden, the Netherlands.” Journal of the History of Biology 41(4):677–716.

[2] Coues, E.B. 1880. “Third installment of American ornithological bibliography.” Bulletin of the United States Geological and Geographical Survey of the Territories 5 (4): 521-1072.

[4] Both men were leading French naturalists of the late 18th and early 19th centuries.

[5] Coues, E.B. 1880. “Third installment of American ornithological bibliography.” Bulletin of the United States Geological and Geographical Survey of the Territories 5 (4): 521-1072.