One common problem with the Internet is that hyperlinks become outdated without web page editor awareness. Websites change URLs for a host of reasons and unfortunately when third parties link to them users end up encountering “page not found” and other dead-link errors. For this reason, many academic publishers use a system of unique identifiers for their online content to act as permanent links to articles thereby avoiding these errors.

END_OF_DOCUMENT_TOKEN_TO_BE_REPLACED

The open access (OA) movement has a lot of moving parts. For example it has led some research funding agencies to mandate that research publications resulting from grants should be made publicly available. A recent memo from the White House Office of Science and Technology Policy requires federal science agencies to prepare a policy for making the published results of scientific research available to the public. The Smithsonian Institution is now working to formalize its policy.

END_OF_DOCUMENT_TOKEN_TO_BE_REPLACED 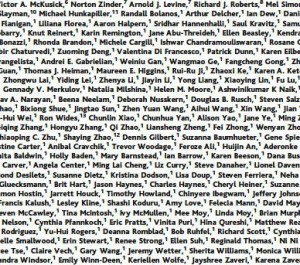 Several years ago the National Museum of Natural History hosted a visitor from Science magazine who gave a presentation for authors on strategies for getting published in that journal which boasts a low 7% acceptance rate. The session contained some helpful tips and the speaker ended his talk with some humor by speculating (somewhat facetiously, perhaps) on the top 10 future trends in scientific publishing. Referring to the recent growth in co-authorship, one of his “predictions” was that someday the list of co-authors for an article would exceed the length of the article itself. While that may have seemed amusing, few realized that within a short time the Smithsonian Research Online (SRO) database of scholarly publications would add an article which includes over 3000 co-authors and approximately the same number of words in the article’s body of text.

END_OF_DOCUMENT_TOKEN_TO_BE_REPLACED

The evaluation of research quality is a task which is attracting attention as the world turns more and more to evidence-based decision making. The work of scientists and historians are regularly reviewed by institutional administrators to ensure a high quality of scholarship and to determine where to deploy scarce resources. One of the most relied-upon components of research assessment is the review of publications authored by a particular scholar. And although publications are difficult to objectively evaluate, the standard method for many years was to use the journal impact factor. This method measured the number of times the articles from a particular journal were subsequently cited by other publications, for which a numeric score was assigned to the journal. It soon became prestigious for scholars to have their papers published in a journal with a high impact factor.

END_OF_DOCUMENT_TOKEN_TO_BE_REPLACED

Routine processing of library books frequently means using shelves and other spaces as staging areas for incoming and in-process items. As gifts and purchased books are acquired, cataloged and labeled, librarians typically work on them in batches, sorting on to separate shelves those which have not yet been searched in the catalog or which represent additional copies for the collection or which require a certain level of cataloging, etc. As they move through the processing of getting them to the library and ultimately, the reader they are moved from place to place in the back-rooms of library work areas.

END_OF_DOCUMENT_TOKEN_TO_BE_REPLACED

I have met with several federal science library groups in recent weeks and among other things felt a great sense of relief on discovering that most of them face the same issues in managing digital content as we do at the Smithsonian Libraries.

END_OF_DOCUMENT_TOKEN_TO_BE_REPLACED

During the week of January 16-19th, I visited the Smithsonian Tropical Research Institute (STRI) to discuss several matters relating to the Smithsonian Research Online (SRO) program and to offer technical END_OF_DOCUMENT_TOKEN_TO_BE_REPLACED