The Fix: The Conservation of Random Records of a Lifetime

In preparation for the December 1st, 2016 170th birthday of William Henry Holmes  we repaired several of his “Random Records of  Lifetime”. The repairs enabled the volumes to be digitization and included in the transcription project. This is volume 1 of his multi-volume memoir/scrapbook.

END_OF_DOCUMENT_TOKEN_TO_BE_REPLACED

Celebrating Our Man of Many Hats: William Henry Holmes

December 1st is the 170th birthday of William Henry Holmes, the Smithsonian’s own Renaissance man. Early in the Smithsonian’s history, Holmes served as the head of the Anthropology Department and later the first director of what would become the Smithsonian American Art Museum. Starting today, we’re celebrating his legacy.

END_OF_DOCUMENT_TOKEN_TO_BE_REPLACED

Lighting the way with political torches

Halloween is just around the corner, and many libraries & archives are scouring their collection for fitting images for #PageFrights. I found this patent drawing for a Jack-a-Lantern torch in END_OF_DOCUMENT_TOKEN_TO_BE_REPLACED

For Camping Month: How to Share a Tent with a Smithsonian Secretary

What are your plans for National Camping Month? Thinking of bringing along a sketchbook? You’d be in good company.

Mary Vaux Walcott (1860-1940) was undoubtedly a pro at camping. The naturalist and botanical illustrator spent the summers of her youth in the Canadian Rockies with her well-to-do family, where she became an active mountain climber, outdoorswooman, photographer, and started her first forays into botanical illustration. It was later in life, in her mid fifties, when she married the then current Secretary of the Smithsonian, Charles Doolittle Walcott, against the objections of her father.

END_OF_DOCUMENT_TOKEN_TO_BE_REPLACED

Designing Women: The Hewitt Sisters and The Remaking of a Modern Museum (Part 2)

This is a two-part series on the Hewitt sisters. Read part one.

By 1897, Sarah and Eleanor had collected enough to formally open their museum on the fourth floor of the Cooper Union. In the tradition of their grandfather, the Hewitt sisters wanted to actualize a museum and library that were not just a showcase, but also tools—places that students and designers could come to for reference and inspiration, then go out and create their own innovative objects. In the birth of the Cooper Union Museum for the Arts of Decoration, the sisters embodied the increasingly democratic attitudes that grew to dominate the 20th century. Their museum was to be open to everyone, with “no tedious restrictions and formalities,” which were often imposed by the exclusive art galleries of the era. Indeed, their museum provided a means for many women to gain economic independence through art and design.

END_OF_DOCUMENT_TOKEN_TO_BE_REPLACED 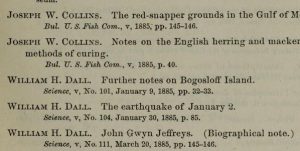 Thanks to support from the National Museum of Natural History,  Smithsonian Research Online (SRO) is adding a large body of legacy publications to its database this year. The source of the data is the annual reports of the United States National Museum (USNM) from the 1870s to the 1960s which often included an appendix listing staff publications. Some years there was no data listed, for example during World War II.