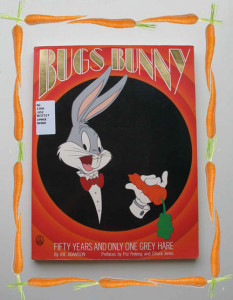 In 1940, a star was born. Bugs Bunny appeared in A Wild Hare which also starred his ever-hunting co-star, Elmer Fudd. Over the past 69 years, Bugs has starred in over 200 cartoon shorts with notable figures such as Elmer, Daffy Duck, Yosemite Sam, Wile E. Coyote, Marvin the Martian, and the Tasmanian Devil. Bugs is a fixture in American culture and known around the world. Bugs has many accomplishments, including having his own Hollywood Boulevard plaque, being the first cartoon character to be honored with a U.S. postage stamp, and presenting the Oscar for Best Animated Short Subject in 1990. If you’re interested in learning more about Bugs, the National Museum of American History Library has Bugs Bunny: Fifty Years and Only One Grey Hare available. Note: 14 carrot frame not available for checkout.

To our favorite “wascawwy wabbit,” we wish you many more!