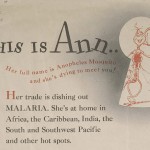 A very belated Happy 108th Birthday to Theodor Seuss Geisel!  Better known as Dr. Seuss, Theodor (born on March 2nd, 1904) was not always a children’s book author.  During the Depression and through World War II he found success as a political cartoonist, commercial illustrator, and filmmaker.

He was so successful as a cartoonist that the popular bug spray, Flit, had him on the payroll for seventeen years to write and illustrate advertising copy based on a cartoon he had published featuring the spray.  Geisel, who was quite the progressive radical, created a slew of political cartoons for the liberal publication PM, a New York left-wing daily newspaper between 1941 and 1943.  During his time with PM he penned 400 cartoons.

Towards the war effort, which he heartily supported, Geisel produced posters for the United States Treasury Department’s “Squander Bug” campaign (“Starve the Squander Bug. Buy More War Bonds” in 1942.  By that point Dr. Seuss had already authored four children’s books.  Then in 1943 as an enlisted Captain in the Army he collaborated with another recruited children’s book writer, Munro Leaf (the author of The Story of Ferdinand) and illustrated a 32-page pamphlet:  This is Ann: she’s dying to meet you.  Geisel did the illustrations, and Leaf the text.  It was a patriotic labor for which neither could claim authorship directly.  Rather the United States government was listed as the sole author. “Ann”–short for the Anopheles–was a mosquito femme fatale character with voluptuous red lips swilling a sexy blood cocktail.  She was part of an aggressive propaganda campaign that included among other things silly cartoons, racist characters, and scare tactics to warn soldiers of the dangers of malaria, especially in the Pacific.  In the Pacific theater only one in eight American soldiers was hospitalized due to battle injuries while the remainder were felled with diseases like malaria, which thrived in the ruts, roads, and ditches created by the constructions of war.  By mid-1944, the campaign against malaria had worked.  Lower infection rates coincided with increasing victories in Asia and Europe.

In addition to the pamphlet, there are at least two known folded posters starring Ann (“This is Ann:  she drinks blood!”) that were published on the back side of issues of Newsmap, a publication distributed by the United States Army Orientation Course, Special Service Division Army Service Forces of the War Department.

In 2010, Dr. F. Cristian Thompson, a research entomologist at the United States Department of Agriculture (USDA) working at the Smithsonian Institution, generously gave a copy of one of the Newsmap posters to the Joseph F. Cullman 3rd Library of Natural History.  During a visit to Washington DC by Dr. Seuss, Dr. Thompson had the poster signed by Seuss.  Upon seeing the poster, Geisel remarked that he had seen the pamphlet, but never the poster.  A digital interactive of Thompson’s signed poster can be found at “The Young Diptera Site” hosted by the USDA and sponsored by the National Museum of Natural History of the Smithsonian Institution.

To learn more about the early political cartoons, advertising, and wartime propaganda of Theodor Geisel, also known as Dr. Seuss, go to: