Digitizing a piece of aviation history 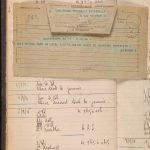 This month we have the rare privilege of highlighting a dramatic turn in the history of early aviation though primary source material from the library at the National Air and Space Museum.

As a precursor to more official involvement in World War I, The US Air Force sent a volunteer squadron to France, the Lafayette Escadrille. This month’s feature is the Journal des marches et opérations pendant la campagne du l4/8/16 au 9/9/17. The first log in the two volume set, beginning August 24, 1916 and continuing to September 9th, 1917, follows their day-to-day exploits through 288 hand-written pages. The time of each patrol is neatly recorded along with the names of each pilot who flew.  Often “Avions Abattu” -airplane crashed- is penned next to an entry and then carefully underlined in straight blue pencil. A few pages into the log on September 3rd, 1916, the original paper telegram from the American pilot Raoul Lufbery is pasted to a page. In an episode told and re-told about the Escadrille, the American Lufbery has written to his French commander, Capitaine Georges Thenault, “JE SUIS RETENU DANS UN LOCAL DISCIPLINAIRE PLACE DE CHARTRES” or I AM RETAINED IN A LOCAL JAIL…” Lufbery was imprisoned after he assaulted a railways employee who refused him passage aboard a train.

A call from the captain of the squad ensured his release and a few weeks later on September 23rd, 1916, a rehabilitated Lufbery was preparing for patrol with another pilot, Kiffin Yates Rockwell. But Lufbery had to turn back due to potential life-saving engine trouble while Rockwell flew alone into mortal combat with the German two-seater which eventually shot him down. Words recording the loss of the Escadrille’s beloved “Kif” are set down on paper by Capitaine Georges Thenault, the keeper of the Journal, who outlines the entry with a thick black box in ink, signifying the death in combat of a pilot.  The box has not appeared in the journal until now but it will appear again and again as the war progresses, men die as the Journal des marches et opérations unfailingly records it all.

Special thanks to Charles Gosse, contractor and volunteer at NASM, for contributing to this post!