In honor of National Volunteer Week, please enjoy this illuminating post by National Museum of African Art branch library volunteer, Judy Schaefer. Judy is one of many hard working volunteers at the Smithsonian Libraries and we appreciate each and every one! 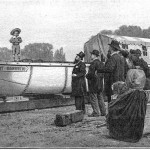 In 1902, Commander Eugène Lenfant traveled from Paris to Lake Chad in a mere 75 days.  He was looking for a cheap, fast, and humane way to supply the French Sudan—”Afrique française” on the map—and he found one by ascending the Niger, Benue, Kebi, and Chari rivers all the way to the lake.

Lenfant’s account of his journey, ʺLa grande route du Chad, Mission de la Société géographique,ʺ appears in the October 15, 1904, issue of  Le Tour du monde, an illustrated weekly of travel and exploration published in Paris between 1860 and 1914.  Its well-written and informative articles by various European explorers, travelers, colonial officials, and military officers told of exotic cultures in fabulous landscapes and, as exploration yielded to colonization in Africa, Asia, and North and South America, of history in the making.  Parisians began to dream of their own foreign adventures, and so the tourist industry was born.  Beginning in the 1890s, detailed travel information such as train and boat schedules with prices and advice on what gear to take along appeared in each issue.

On this journey, Lenfant was witness to, and participant in, a three-level clash of cultures: animist, Muslim, and European.  At the bottom of the  heap were the peoples of the Benue, Mayo Kebi, and Chari river basins—mostly Moundang and Mousgoum, animist farmers.  They mainly wanted to be left alone.

The Kotoko people, who lived near Fort Lamy, adjacent to Lake Chad, had already solved one culture clash.  Animist by tradition, most had converted to Islam by the 19th century and been absorbed by the adjacent Fulbe culture of Bornem and Kanu.

Lenfant tells us that Kotoko men plied the lake in large boats made of planks sewn together with twine.   About the women he says little, so we are forced to study the photograph for information.  The woman in the center seems to be posing, on request, for the camera; why was she chosen?  For her jewelry?  Her hairstyle?  Her simple beauty?  Surely the other women see the camera and the man behind it.  Can you guess their reaction?

The Fulbe had long raided animist villages to capture men, women, and children for the highly profitable trans-Saharan slave trade.  As an old Moundang farmer told Lenfant, “[they] came on in wild hordes. They wore hideous masks, animal skins, and iron helmets to scare their prey.”  As the slave trade gradually wound down, the Fulbe sought not bodies but souls, forcing animists to convert to Islam.

Then came the Europeans, who were less interested in bodies and souls than in land and resources.  Lenfant returned to France confident that, thanks to his efforts, his country’s African takings would be more secure than ever.

Why read Le Tour du monde now?  The pictures alone (including all of the images here, though there are 140 of them in “La grande route du Chadʺ) are valuable resources for historians, anthropologists, and art historians, but nonspecialists who are curious about Africa’s past will appreciate them, too.  In addition, readers of French will enjoy engrossing narratives, often filled with danger and unimaginable feats of endurance and always enhanced with historical information, cultural details, and a feeling for the varied landscapes and their associated human economies. Lenfant’s article is a fine example of the wealth of information presented in the pages of Le Tour du monde.

The Warren M. Robbins Library, at the National Museum of African Art, has an almost complete run of Le Tour du monde.  You can also see all issues online at www.gallica.bnf.fr ; (search for “le tour du monde charton”).   The library also has a more complete version of this article, a book published in 1905 under the same title.  It contains additional information along with a preface, an introduction, an author’s note, a record of meteorological observations for each day of the journey, and a fold-out colored map.  DT546.42 .l45 1905.