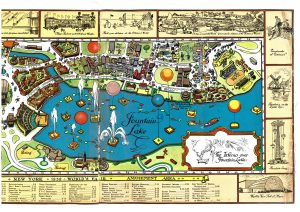 While searching for candidates for the Smithsonian’s Adopt-A-Book project, I took a detour to the “T” call numbers in order to shelve a second edition 1939 World’s Fair Guidebook that had recently been reclassified as “Rare”. The 1939 New York World’s Fair has been a subject of personal interest for me since last summer, when I stopped in at the National Building Museum’s exhibit, Designing Tomorrow, America’s World’s Fairs of the 1930s. Part of my interest is due to the time period: the spectacle and relentless optimism of these exhibitions is especially fascinating in the context of the Great Depression, and the historical forecasts of the 1930s shed an interesting light on the future events of the 20th century.

I was also drawn by the ephemeral nature of the Fairs. Although the Fairs were heavily publicized and ran for months on end, for most visitors, a Fair trip was a one-time experience. The exhibition buildings and sculptures had to be able to impress and draw a crowd, but were never meant to be permanent. For this reason, ticket stubs, souvenir buttons, pamphlets, and other Fair ephemera seem especially precious to me. I imagine that they were saved as keepsakes rather than as serious collector’s items or reference objects. They were not intended to be important, but today serve as coveted primary source material. 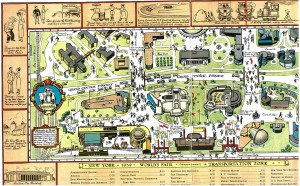 So, of course, when presented with an original ’39 Fair guidebook, I took the opportunity to read through it, and decided to keep an eye out for more rare ephemera when I was done.

Most of the Library’s Fair-related holdings come from the better known World’s Columbian Exposition (in Chicago, 1893), but while searching for candidates for the Library’s Adopt-A-Book program, I turned up a 1939 souvenir map designed and illustrated by German-American artist and puppeteer Tony Sarg. 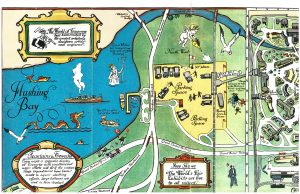 Originally sold for twenty-five cents, the booklet contains four double-page spread maps covering different aspects of the fair. The center-fold of the first page opens out to reveal a fifth, even larger, overview map. All of the maps are clear, functional, and informative, of course, but the real standout feature  is Sarg’s illustrations. Each page is crowded with tiny drawings of fairgoers—complaining (in hand-lettered script) of aching feet or begging for treats or gaping at the sights. Three of the maps are also framed by slightly larger drawings depicting details of the fair—buildings, sculptures, favorite exhibits, and even basic services, like the Greyhound bus and the first aid station. The drawings are amusing and beautiful, but also serve as excellent sources of the same small, oft-overlooked details I mentioned earlier.  The entire booklet is printed in bright, saturated color on high-quality paper—almost shamefully lavish for a throwaway map, or even for a simple keepsake. Given the time period, this speaks again of the optimism and exuberance of the World’s Fair, and perhaps of the artist’s attitude and sense of humor as well. The map provides a wealth of information, packaged in colorful, candy-coated bites, and for this reason it is definitely one of my favorite items from the AA/PG Library’s collection.  My internship is winding down, but I’m happy I had the chance to view this wonderful object. Along with the Art and Artist Files and the other unusual books (and book-like objects) in the Library’s Rare Books collection, it has expanded my idea of what a library can be.

Learn more about us and our collections.
END_OF_DOCUMENT_TOKEN_TO_BE_REPLACED