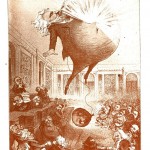 Joseph Keppler was born in Vienna, Austria in 1838. In 1867, after years of working as a set painter and an actor, he immigrated to the United States with his family. Here, he tried his hand at drawing cartoons for a number of magazines. Eventually, Keppler decided to become independent and start his own magazine–Puck–which featured his own cartoons, as well as commentary on politics and other important issues of the day. Puck would eventually garner a huge readership and become one of the most popular magazines of the era.

The magazine, and Keppler, truly rose to fame during the 1880 presidential campaign. His witty and critical political cartoons created a satirical commentary on the political issues and corruption of the era. His artistic talent and intricate lithographs about the candidates also helped Puck gain a strong following, which remained strong even after the election was decided. The magazine remained a popular periodical throughout the 1880s and into the 1890s thanks to Keppler’s detailed and clever lithographs.

However, Keppler was overambitious with his Puck presentation at the 1893 World’s Fair in Chicago and decided to publish the magazine on site at the fairgrounds. The Puck publishing building at the fair had poor air circulation, making for uncomfortably warm working conditions during the Chicago summer and the writers and artists were constantly at odds under the stress. The issues that arose during the Fair showed the strain and conflict growing within the magazine’s staff, and the its leadership steadily began to fall apart as the year drew to a close.  Keppler died in 1894; although the magazine lasted until 1918, it never regained its large readership or the influence it held under Keppler.

Regardless of the less-than-dignified ending of Puck, it retains the honor of being one of the most popular and influential magazines of the late nineteenth century. The phenomenal caricatures and lithographs that Keppler created remain a testament to his artistic talent, while the message each cartoon sends helps to show some of the political sentiments and opinions of that era. A Selection of Cartoons from Puck by Joseph Keppler brings many of these cartoons together into one impressive tome that allows for many delightful hours of perusing political cartoons of the past.

Satire on Stone: The Political Cartoons of Joseph Keppler by Richard Samuel West

A Selection of Cartoons from Puck by Joseph Keppler: With Text and Introduction by H.C. Bunner