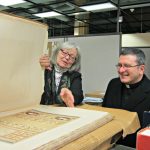 John Dick, head of gifts and exchanges at Smithsonian Libraries, recently contacted the Roman Catholic Nunciature (the representative of the Holy See in the United States) to offer Le Vatican et la basilique de Saint-Pierre de Rome – a four-volume, oversized publication on interior decoration in the Vatican and St. Peter’s Basilica, published in Paris in 1882. The Apostolic Nuncio Archbishop Carlo Maria Vigano was interested in the volumes, despite the books’ poor condition. Monsignor Gordon from the Nunciature picked up the volumes on December 19.