The “O’Connor File” and the WPA

– This post was contributed by Kelsey Clark, intern at the Smithsonian AA/PG Library summer 2013.

The Works Progress Administration (WPA) was created during the Great Depression as the largest and most ambitious New Deal agency, employing millions of people to carry out public works. This included artists, such as William Gropper, Marsden Hartley, Henry Varnum Poor, or Ben Shahn, who painted murals across the nation, from inside Coit Tower in San Francisco to the Harlem Hospital in New York City. The Smithsonian Libraries collection has books and archival material on the WPA projects, including a file on one man intimately connected to the government project: Dr. Francis V. O’Connor.

During my internship, I was given the “O’Connor File” as a research project – a box filled with files containing published articles and books he had written, archival notes, and letter correspondence between the former Librarians at the National Portrait Gallery and various patrons concerning the rights to read some mysterious “questionnaires” that were somehow connected to O’Connor and the WPA. What were these documents? Why does the American Art and National Portrait Gallery Library (AA/PG Library) have them? What was O’Connor’s connection to the Smithsonian, if at all? 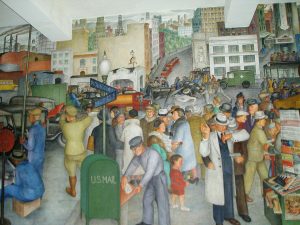 As I did more research, I discovered that O’Connor had surveyed WPA artists and had them complete questionnaires, which he compiled as unpublished transcripts. These transcripts were deposited in the National Collection of Fine Arts/National Portrait Gallery Library (now the AA/PG Library), and then transferred to the Archives of American Art sometime in the 1970s, where they remain today. While the original transcripts were held at the NCFA/NPG, researchers wrote in to the Librarian asking for permission to view the transcripts. The Librarian responded that they must gain written permission from the artists themselves before the library could allow access to the transcripts. The “O’Connor File” contains copies of all of this letter correspondence, including the artists’ written response to the Smithsonian allowing researchers access to their WPA questionnaires!

Dr. Francis V. O’Connor did his work with the WPA artists through a National Endowment for the Arts grant, eventually allowing him to publish several works on federally supported art projects.  His New Deal Art Projects: An Anthology of Memoirs from 1972 was published by the Smithsonian during his time as a Senior Visiting Research Associate at the NCFA (now the Smithsonian American Art Museum). 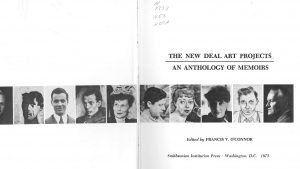 Interestingly O’Connor is most known not for his work with WPA art and artists, but for his work on Jackson Pollock. O’Connor wrote his Ph.D. thesis The genesis of Jackson Pollock for Johns Hopkins University in 1965, despite his advisor’s suggestion that he write on Delacroix. (This was before the Pollock was as widely known and revered as he is today.) O’Connor went on to publish a catalogue raisonne on Pollock as well as other books and exhibition catalogs.

O’Connor continues to be an active art historian today, and maintains a virtual pictorial The Mural in America (2008) as well as a professional blog. The Smithsonian Libraries collection includes O’Connor’s range of works that express his interest in both the Abstract Expressionism of Pollock and federally supported WPA murals that can be viewed today coast to coast.

To learn more on the WPA across the Smithsonian, please see: