Halloween is quickly approaching and with it come the traditional decorations of bats, pumpkins, ghosts and of course, skeletons. Back in the 1500’s, one man changed the way the medical world saw the skeletal and muscular systems of the human body. That man, Andreas Vesalius, illustrated anatomical features in his De humani corporis fabrica (On the structure of the human body) in a way never before seen. Although the pages below may seem pretty gruesome they come from one of the most influential anatomy books of all time.

Born in Brussels in 1514, Andreas Vesalius came from a family of doctors and apothecaries. When he became a physician himself and began teaching medical school in the 1530’s, most of the standard texts were based on animal dissections and the observations of an ancient Roman doctor named Galen. Vesalius took the unconventional step of performing dissections live in front of his medical students and using human bodies, in some cases those of convicted criminals.

In 1543, 29 year old Vesalius published De humani corporis fabrica with elaborate wood-cut illustrations of human dissections. But these bodies weren’t just lying still, as if on a mortuary slab. They were depicted in classical contrapposto. In many instances, layers of tissue artfully fall away to reveal the muscles and ligaments which lie beneath. Despite the artistic quality, the book is considered one of the first anatomical works, accurately representing and describing various systems in the body.

Vesalius gave detailed notes to the printer, helping to assure that the descriptive text matched the appropriate figure and that the artistic style of the plates was preserved. The printer, Johannes Oporinus, felt that these notes were so important that he included them in the publication itself (see “Printer’s Note to the Reader” here: http://vesalius.northwestern.edu/books/FA.b.html).  In the text of the book, Vesalius not only describes the systems of the body, but also his recommendations for obtaining skeletons, putting them together and dissecting cadavers.

The so-called “Muscle Men” of the book are depicted on a background that is thought to be Padua, where Vesalius taught medicine. If pieced together, the plates’ backgrounds form a full landscape. Vesalius dedicated the book to Holy Roman Emperor Charles V and later went to work as the Emperor’s personal physician.

The Smithsonian Libraries has one copy of the first edition of the book, in the Dibner Library of the History of Science and Technology, a gift from the Burndy Library. Bern Dibner, founder of the Dibner and Burndy, named the book as one of his “Heralds of Science”, (a collection of the 200 most important scientific texts) because it was the first truly accurate depiction of the human body in medical texts. 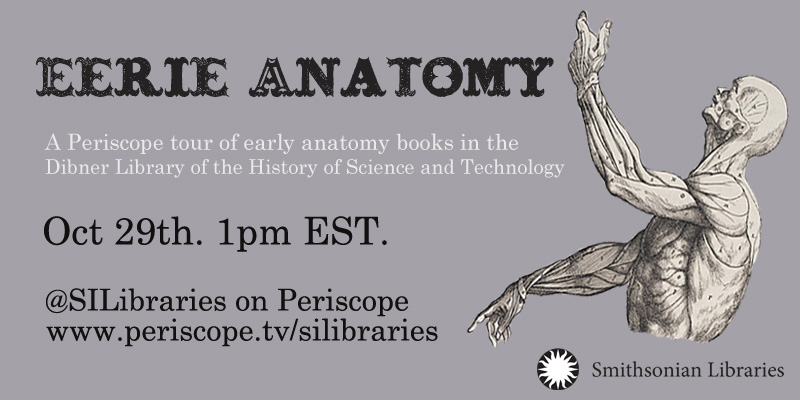 Learn more about Vesalius and the history of anatomy books during our live tour in the Dibner via Periscope on Thursday, October 29th at 1pm (EST). Head of Special Collections, Lilla Vekerdy, will highlight a few of the rare books that helped transform the way the medical professions studied the human body.

If you’d like to explore more of De humani corporis fabric on your own, the Biodiversity Heritage Library has recently added a copy from the Getty Research Institute (via the Internet Archive) to their online collection.