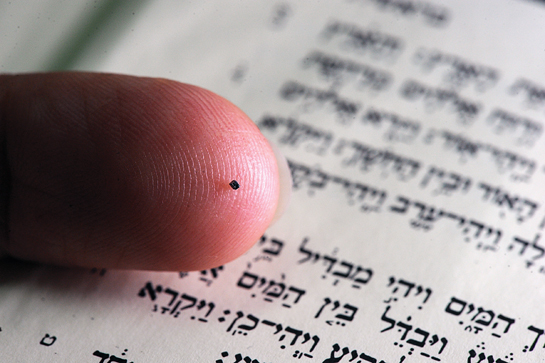 The Nano Bible is the world’s smallest version of the Hebrew Bible, produced by researchers at the Technion-Israel Institute of Technology in Haifa, Israel. Engraved on a gold-plated silicon chip the size of a sugar grain, the bible’s text consists of more than 1.2 million letters carved with a focused beam of gallium ions. The text engraved on the chip must be magnified 10,000 times to be readable.

“We are excited to enrich the Libraries’ collections with this marvelous gift, which marries one of the world’s oldest and most significant texts with one of the newest technologies of the 21st century,” said Nancy E. Gwinn, director of Smithsonian Libraries. “As one of our principal values is to share our collections with the public, it is appropriate that the only copy in the United States be located here, as part of the national collections.”

At less than 100 atoms thick, the Nano Bible demonstrates how people can process, store and share data through tiny dimensions using nanotechnology. The Smithsonian’s Nano Bible will be the first one received in the United States.