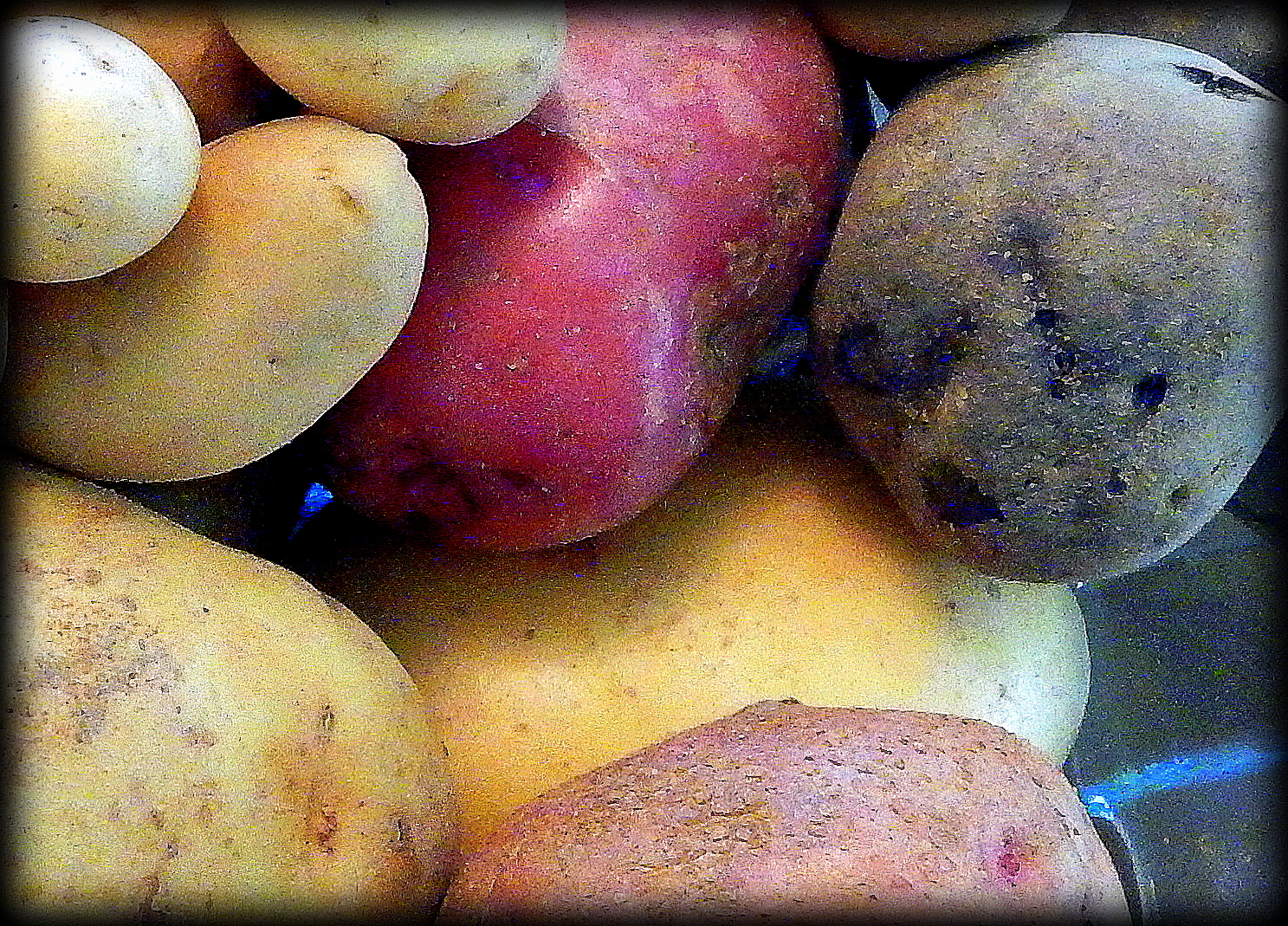 September is National Potato Month. Almost all the potatoes grown in the United States are planted in the spring and gathered in the fall. It is the time of year that schools in northern Maine have “harvest break” when students work to dig and sort the season’s spud crop soon after summer vacation.

Maine’s custom is one small part of the very long and interwoven agricultural, economic, social, culinary, medical, and ritual histories of this humble staple. It is a story that stretches from ancient gardens in the Andean Mountains 10,000 to 8,000 years ago … to perhaps Mars in the future? In the recent movie, The Martian, the stranded astronaut-botanist (played by Matt Damon), bases his long-term survival strategy on the Red Planet, not completely unfeasibly, on planting potatoes. But is the potato relevant for us today?

A carbohydrate, the tubers have nutritional detractors who point out that Americans consume far too many calories from white starches, including processed potato products in the forms of French fries and chips (along with the harmful fats and salt that go with them). With dehydrated and other potato products, these foods account for fifty percent of the potato market. Meanwhile, the annual consumption of fresh potatoes in the United States has fallen from eighty-one pounds per person in 1960 to forty-two pounds recently (the official Government report here). Potatoes are a hot political issue: Congress has fought successfully to keep the white potato in food assistance programs, including those of school lunches and breakfasts, against recommendations from the Department of Agriculture.

Following rice, wheat, and corn, potatoes are among the most consumed food crop in the world. The tuber is easy to grow in a variety of climates and soils, and is not as thirsty for water as many other vegetables, producing a high yield from a small area. Able to be stored for long periods, the potato is a good source of vitamin C (surprisingly), potassium, phosphorus, magnesium, vitamin B₆, and some iron. Inexpensive, lacking only calcium and vitamins A and D, it is almost a complete food. Beginning with the ancient civilizations of Huari and Tiahuanacu located in parts of modern-day Peru and Bolivia, the spud has been insurance against famine, providing sustenance when other crops failed.

If there is a food stuff that deserves a commemorative month or day (May 30th in Peru), it is the potato.

Not surprisingly, the Smithsonian does not treat the subject as small potatoes. In most, if not all, of the twenty-one separate libraries in the Institution, information on some aspect on the history and culture of the potato can be found. So what better way to celebrate the potato (Solanum tuberosum) and find its relevancy than by digging into some of Smithsonian Libraries’ holdings that tell its rich story? From the Anthropology, American Indian, Natural History, Horticulture and Botany libraries, the trade literature and cookery collections of American History, and, of course, Special Collections, all have original and secondary sources for an (almost) complete picture of this highly significant plant.

Archaeological research finds that the potato was first domesticated from wild plants on the shores of Lake Titicaca in the Andes. With sophisticated agricultural technology, including raised field terraces and irrigation systems, Pre-Inca cultures came to thrive on huge yields of the crop. The Inca Empire relied on potato storehouses, including a freeze-dried product (chuña) that could hold for years, in times of crop failures. Pedro de Cieza de León, explorer and historian, described the cultivation and cooking in his Chronicles of Peru, in 1540. Spanish conquistadors, who largely destroyed the Inca civilization, brought the potato across the Atlantic. Early accounts are a bit murky with the confusion between white (papas) and sweet potatoes (batata), but they were cultivated on the Canary Islands from 1565 and then onto the mainland of Spain.

Potatoes were being grown in London not long afterwards. The first printed pictures of the potato plant appear in woodcut illustrations in John Gerard’s great Herball of 1597. Gerard, who grew the plants in his own garden, misidentifies the origin of the potato as Virginia. It was not introduced into North America until the 1620s when the British governor of the Bahamas sent the tuber, along with other vegetables, to the Jamestown colony in Virginia. However, Derry, New Hampshire claims the first potato patch in North America, planted in 1719 when Scot-Irish immigrants settled in the area.

From England, the potato moved to France and then on to the Netherlands. Carolus Clusius (or Charles de l’Ecluse) introduced the potato to the Low Countries. Woodcut illustrations are in his Rariorum plantarum historia (The history of rare plants; Antwerp, 1601). Because potatoes were a good source for preventing scurvy on long voyages, they were distributed via shipboard provisions to the far reaches of the world in the age of exploration. Potatoes also lessened the effects of tuberculosis, measles and dysentery. But the tuber became stigmatized as it moved from the exclusive botanical gardens of the wealthy in the 17th century, when it was thought to be poisonous and fit only for livestock or the truly indigent.

In Europe and Russia during the second half of the 18th century the potato was vigorously promoted to lessen the economic distress of successive disastrous harvests of corn and wheat. Various groups and individuals produced pamphlets and books to educate and extol the crop’s virtues, such as the Society for the Encouragement of Arts, Manufactures and Commerce, and military pharmacist and agronomist Antoine Augustin Parmentier. An example is Memoria sopra I pomi di terra (Memoire on the potatoes) of 1767, an Italian translation of a French publication (Dibner Library) that discusses varieties and cooking methods.

In France, the tuber was particularly regarded as a poor person’s food. Sadly, the Smithsonian Libraries does not own a copy of the important Parmentier work, Examen chimique de la pomme de terre (Chemical examination of the potato, 1778). He was so successful in his efforts that some still believe he invented the potato, and there are many dishes named for him, such as the casserole of veal chops à la Parmentier.

By the 19th century, the potato was common and so prevalent that historians debate its exact role in fueling the population explosion of the period. The food stuff also was being put to other uses, such as in alcoholic spirits. John Ham’s The theory and practice of brewing, from malted corn and from potatos (London, 1829), is one such treatise. There are many gardening manuals in the Smithsonian Libraries that discuss all the types then being developed and best methods of growing and storage. William Cobbett’s The American gardener (London, 1821) has this charming entry:

Potatoe – Every body knows how to cultivate this plant; and, as to its preservation during winter, if you can ascertain the degree of warmth necessary to keep a baby from perishing, you know precisely the precautions required to preserve a potatoe. – As to sorts they are as numerous as the stones of a pavement in a large city.

But such dependency on a single crop, relied on by a huge population, proved ripe for disaster. This came in the form of late blight disease in the 1840s, which struck hard in Europe and was particularly devastating in Ireland. These catastrophes led to the development of disease-resistant plants, in particular by American horticulturist Luther Burbank who worked to improve the Irish potato; he bred a type in 1872 that established the Idaho potato. These new varieties led to even more potato dominance in food production and plantings around the world. It is a story likely to play out again with climate change, as scientists work to develop cultivars even more resistant to heat, drought and disease. To lessen pollution and water use and help feed its exploding population, China is now by far the largest producer of the staple in the world. Will the potato once again save some parts the world? (see Zuckerman, Larry. The potato: how the humble spud rescued the western world. Boston, 1998 and this Wikipedia entry on the subject).

The extensive agricultural trade literature collections in the Smithsonian illustrate the trends in the potato’s popularity and dominance into the 20th century (one example linked here). The evolution of the vegetable as source of sustenance to a snack food is also traced in the Libraries’ culinary holdings. Thomas Jefferson had “potatoes served in the French manner” at a White House dinner in 1802 (not, strictly speaking, and contrary to the myth, the French fry). A relative of Jefferson’s, Mary Randolph, had seven recipes for potatoes, including one “to fry sliced potatoes” in her book, The Virginia house-wife, or, Methodical cook. The Dibner Library holds the fourth edition of this important cookbook, published in 1830. The Russet Burbank potato, developed in the 1920s, long, regular with a high sugar content, is the hybrid ideal for French fries. Speaking of which, France and Belgium are still arguing over who invented “French fries.”

This short history, centered on the Smithsonian Libraries collections, merely skims the surface of the potato. So even if you tend to avoid white potatoes in your diet, pick up one of the many, many accounts of the spud to read or raise a fork to the potato this month and celebrate this small vegetable’s big history in the world. In the words of Winnie-the-Pooh creator A. A. Milne: “What I say is that, if a fellow really likes potatoes, he must be a pretty decent sort of fellow” (“Lunch” in Not that it matters, 1919).

Chilies to chocolate: food the Americas gave the world. Tucson, 1992.

Salaman, Redcliffe N. The history and social influence of the potato. Cambridge, 1985.