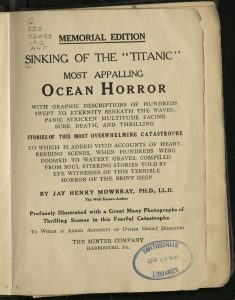 Look no further than the title page of the “Memorial Edition” of The Sinking of the Titanic to find these pieces of purple prose. But if you keep looking, you’ll find that author, journalist, and potential fraudster Jay Henry Mowbray keeps his foot on the accelerator of sensational language for nearly 300 pages in this often horribly unfactual account of “the disaster of the North Atlantic.” All this despite itself saying that “the human imagination is unequal to the reconstruction of the appalling scene.” Though not for Mowbray’s lack of effort and use of adjectives.

If this breathless sensationalism typical of the Edwardian yellow press feels familiar to our clickbait-conditioned 21st century minds, it is no accident. Both eras, fueled by massive information technology advances and wild upswings in social polarization, have found immense pleasure in rubbernecking on disaster or relishing in the newest fad. And neither have, or had, any shortage of opportunists in search of monetizing grief, fear, or titillation with alternating florid and lurid language. 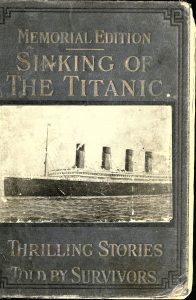 Epitomizing what his counterparts in our era might call “Too Soon,” Jay Henry Mowbray was one of those opportunists. He lent his journalist’s prolix pen and blistering turnaround time to bring the text of The Sinking of the Titanic (including photographs, maps, political cartoons and memorial artwork) to presses in an instant. The book was advertised in the Atlanta Constitution as complete and ready for sale on May 11, 1912, less than a month after the ship struck that infamous iceberg.

This incredible speed puts The Sinking of the Titanic in a curious genre of literature—the “instant book.” The instant book narrates a contemporaneous event through hastily assembled collage and tabloid-esque verve by the likes of Mowbray. Then the whole package is shabbily printed in great abundance before time eases public distress. The genre was first developed immediately after the American Civil War, when both printing industrialization and westward expansion made seemingly in-depth yet sensationalized accounts of exciting events both more available and more desired by the general public. 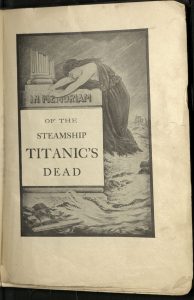 Many instant books, including those written by Mowbray, were devoted to catastrophes. Mowbray’s 1909 Italy’s great horror of earthquake and tidal wave. Terrible devastation and heart-rending scenes.  (in Smithsonian Libraries’ Dibner Library) breathlessly recounted the deadly Italian earthquake of December 1908 that killed tens of thousands of people. In a great example of the time- and cost-cutting strategies of the instant book, Mowbray reuses the memorial art from Italy’s great horror… in The Sinking of the Titanic with background altered from earthquake-ruined columns to storm-drenched arctic seas.

But horror was not the only sensation titillated by the instant book. With the diminishing Western frontier, the public yearned for a reinvention of a powerful and fundamentally American emotion: the sense of adventure. When Teddy Roosevelt went on safari in East Africa on the Smithsonian-Roosevelt African Expedition a mere three weeks after Roosevelt left office, Mowbray was on the case. In his Roosevelt’s marvelous exploits in the wilds of Africa, not only did he capture the bully fever surrounding TR’s cult of personality, he gave a mad sheen to the speed of the instant book by publishing before Roosevelt had returned from East Africa. 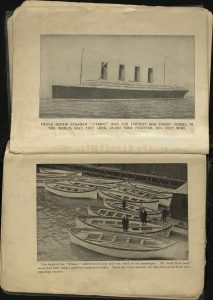 If that sounds like a huckster to you, you might be right in more ways than one. Mowbray’s professional information is difficult to track, owing to anonymizing yellow journalism practices of the late 19th and early 20th centuries, where reporters were rarely given a byline and journalism was even more of a traveling profession than it is today. But one thing is certain, no evidence for Mowbray’s title page claim to both a Ph.D. and an LL.D. (an obscure law doctorate) on The Sinking of the Titanic has yet come to light.

The instant book genre as a whole lent itself to hucksterism, though perhaps with good intent. Instant books were generally financed by subscription book publishers, whose catalog was sold door-to-door by travelling salesmen with suitcases of publisher’s dummies. The eye-popping language and pictures of The Sinking of the Titanic were meant to be a tool in that salesman’s hands to pull a mark in while appealing to their more Apollonian side with seemingly intellectual facades, like Mowbray’s potentially phony doctorates.

Not all of that brainy appeal was fraudulent. While newspapers gave coverage to major events in brief, they were no less victims of the voraciousness of the news cycle than today’s press. Stories turned over quickly and were left behind, though not in the imaginations of the reading public. Instant books gave the reader much more to chew on and were more informative, if not more thoughtful, than the journalistic coverage of the day. 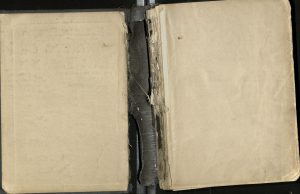 In that way, The Sinking of the Titanic is not only a representation of a disaster of epic proportions that captured the American imagination, but also a window into how Americans represented themselves through their reaction to that disaster. The public craved the sensationalism of juicy description, but only under the veneer of erudition. The book makes for a raucous read while managing to be a sobering symbol of how much our culture has changed, and how little.

You can help preserve this piece of American history through Smithsonian Libraries’ Adopt-a-Book program, where our conservators will repair and encase this book so that it will be protected for generations to come.