The Fix: Preservation and “Principles of Beauty Relative to the Human Head”

Principles of Beauty Relative to the Human Head by Alexander Cozens was published in 1778 by James Dixwell in London. It is a large book measuring 55 by 38 centimeters (21.5 by 15 inches) and is part of the American Art and Portrait Gallery Library collection. It came to the Book Conservation Lab as part of Smithsonian Libraries Adopt-a-Book program. 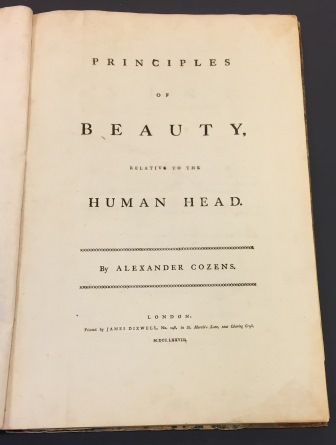 Featured in this post is the treatment of the tissue paper overlays. In the Smithsonian Libraries’ copy 15 of the 17 overlays survive; which had been stored inside the book, some loose and some tacked to the page. I divided these into three different groups based on condition: slightly soiled with a few minor tears; moderately soiled with minor and major tears; and heavily soiled with mostly major tears.

The first piece of the treatment I addressed was the discoloration of the overlays. It appeared to me that this was caused by previous exposure to soot. In order to remove as much of this discoloration as I could I used a vulcanized rubber sponge to gently remove the surface dirt without damaging the paper.

The tissue paper appears to be made of the same fibers as the paper found in the rest of the book. It is a rag paper—made from linen and/or cotton—that has aged well. Due to the condition of the paper I felt I would be able to successfully wash the overlays despite their thinness. I successfully immersion washed all 15 overlays in deionized water supported between two layers of non-woven polyester fabric that possesses a good wet strength.

The next step was to fix the tears using thin light-weight Japanese paper and wheat starch paste. At the same time losses to some of the pieces were filled using the same Japanese paper. Then the overlays were encapsulated by sandwiching each one between two sheets of polyester film and sealing the edges using an ultrasonic welder. The encapsulated sheets are now easier to handle and safer to store. The final part of the treatment will be to create a portfolio case to store the stack of encapsulated overlays inside the box that will also house the book.

If you would like to explore this book more fully it has been digitized as part of our Adopt-a-Book program and can be found here.