An Imaginative World found in a Shell Book 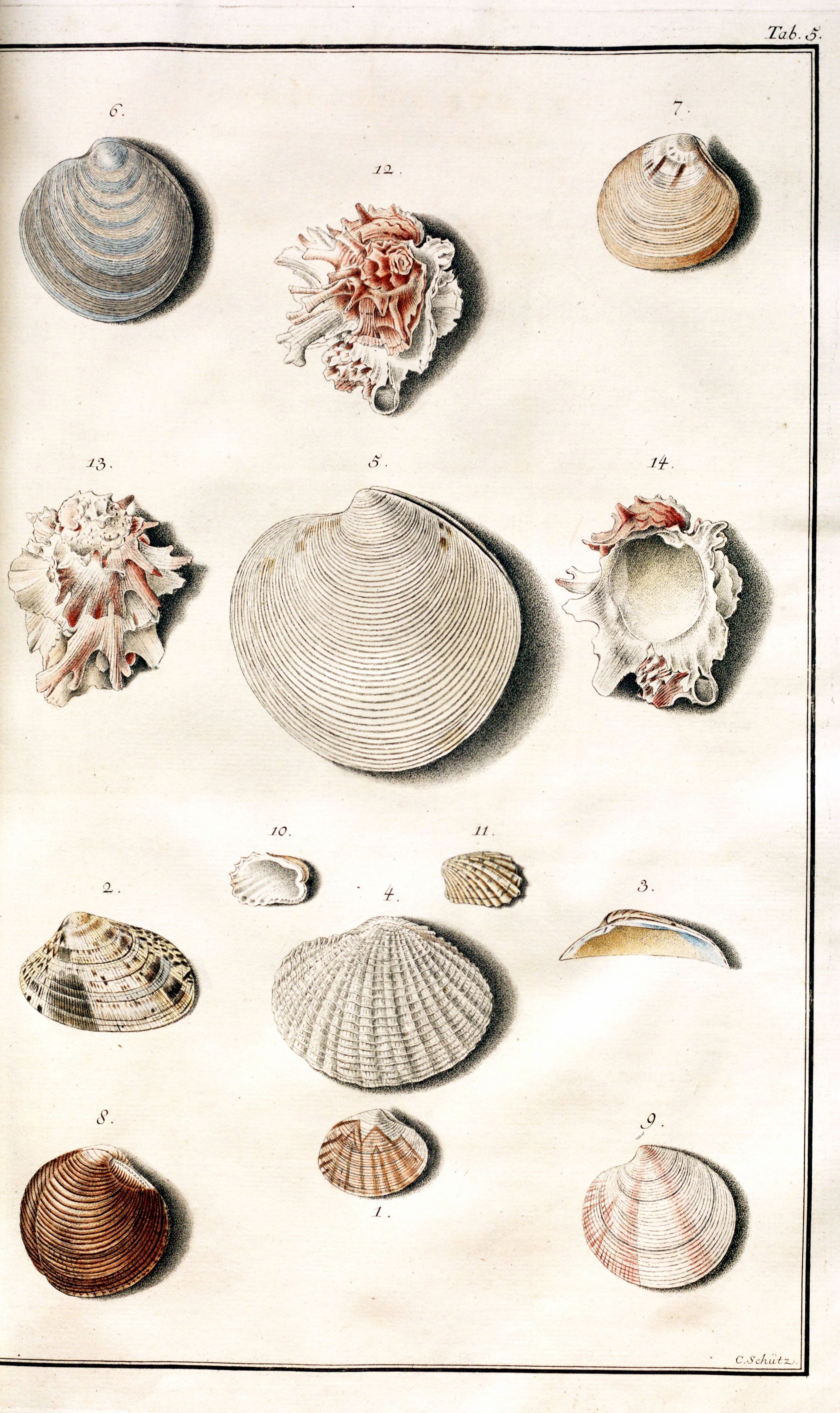 As a commemoration of the Imperial collection of shells in Vienna, the printed folio of Testacea Musei Caesarei Vindobonensis of 1780, is splendid. The eighteen engraved plates, carefully colored by hand, render individual specimens in the Habsburgs’ K.K. Hof-naturalien-Cabinet as if pieces of jewelry, casting shadows on a plain background of the thick, hand-made paper. Dedicated to the Empress of Austria, Maria Theresa (1717-1780), this production was also a work of science, as the task of arranging the shells in the Cabinet and describing them for publication was given to one of the leading scientists of the day, Ignaz Edler von Born (1742-1791).

Born, commissioned by Maria Theresa to arrange the entire royal natural history collections, was principally a mineralogist and metallurgist. But he had a great interest in shells and identified several new species. Systematists in malacology (the study of mollusks, including shells) still examine the originals, now in the Natural History Museum, Vienna (Naturhistorisches Museum), originally built to house the overflowing collections of the Habsburgs. The text of Born’s descriptions are also still used. It was first published in a much smaller format in 1778, in both Latin and German, with one plate as the only illustration. G.C. Kronenberg’s “Born’s strombs (Mollusca: Gastropoda),” a recent article that appeared in Annalen des Naturhistorischen Museums in Wien (2007), is one instance of scholarly work citing Born’s analysis.

Also attesting to the importance of Testacea Musei Caesarei Vindobonensis in scientific research, two copies of the folio second edition were once in the Division of Mollusks in the Smithsonian’s National Museum of Natural History, which holds the world’s largest shell collection (link). The books now reside in the Museum’s Joseph F. Cullman 3rd Library of Natural History. Alas, also indicating their scholarly worth, both volumes were rebound for practicality in sturdy library buckram, their original bindings lost (an earlier practice, happily no longer followed).

The second half of the 18th century was a period when books were produced addressing the lack of illustrations in the enormously influential tenth edition of Carl Linnaeus’ Systema Naturae. In this two-volume work of 1758-1759, the Swedish author (now known more often by his modern name form, Linné) introduced binominal nomenclature for animals, but providing visual representations for publication was time-consuming and quite expensive. The Habsburg commission of Testacea Musei Caesarei Vindobonensis, employing the binominal system and current with Linnaean names and descriptions, filled the gap with essential information. The plates were designed by the artist Franz Fuxeder (1725-1797) and engraved by Karl Schütz (1745-1800) and J. Adam. The vignettes are sometimes signed by “Conti,” Schütz, or Johann Ernst Mansfeld (1739-1796).

Apart from the separately printed plates of carefully displayed shells, there are forty-eight small scenes or portraits interspersed in the text, all of them an absorbing delight of this sumptuous work on conchology. Given the royal funding, individually created vignettes, alluding to the subject at hand, were created. This was a significant expense in the hand-press period. Unlike woodcuts that could go through the printing press with the standing type, intaglio plates had to be separately printed after, but carefully registered with, the pages of text. The scenes portray shells in land- and seascape settings or within elaborate frames with lettered identifications matched up to their descriptions, serving the purpose of a visual footnote.

The images are a world of their own. One imagines the artists having fun with their knowledge and creativity. There are representations of cavorting mythological creations; mermen and mermaids make appearances. Two of the sea creatures play the supporting roles in an interesting interpretation of Venus on the Half-Shell, hoisting her aloft. Rather than her flowing hair or hand, a piece of seaweed provides the element of modesty for the nude goddess.

The engraved publisher’s device on the title page is an allegorical vignette, with the god Hermes (Mercury in Roman mythology) presenting a volume to Athena (Minerva), goddess of wisdom, identified by the sacred (if startled) owl peeking over her shoulder. A putto hefts a book among a stack of other folios. The publisher, whose initials appear in a medallion festooned by a laurel adorning a carved platform, was Johann Paul Krauss (1701-1776), whose firm continued in business after his death. Following the dedication page is a more elaborate piece, with Poseidon sitting on an annoyed-looking porpoise (who served as the god’s messenger), presenting a shell to a female figure (representing the Empress?), who sits enthroned between a caryatid made up of shells and a cabinet of drawers from which puttis play with shells. Behind is an open book, with a plate of shells resembling this title. Visual homages to the Habsburg rulers, current and past, are made in here and throughout the work. Poseidon appears again in one small vignette, this time cruising along on a fierce-looking porpoise (illustration above). His son, Triton (looking a little rough around the edges) emerges from the waves blowing a conch shell. He was known as the Trumpeter of the Sea.

The book also honors the greats in natural history, conveyed in engraved scenes at the beginning of sections of text. The first, in a chapter of Testacea multivalvia, celebrates Pliny, author of the encyclopedic Naturalis Historia. Mermaids and mermen join the tribute to the author, laying seashells at a tomb that bears his name. In the background is the Bay of Naples, with a puffing Mount Vesuvius in the background (Pliny died in AD79 while attempting rescues by ship of those caught by the eruption of the volcano). The second order, Testacea bivalvia, opens with an homage to Ulisse Aldrovandi (1522-1605?), the author of the first important work on shells, De Reliquis Animalibus of 1606. The last, for the third order, Testacea univalvia, is devoted to Linnaeus. There are a few shells scattered about the landscape; guarding the naturalist’s tomb are an eagle and a lion, whose paw rests on an unfortunate turtle. A whale breaches in the background.

It is curious that there hasn’t been more published on the literature of shell books. There are legions of fine, detailed bibliographies in several natural history subject areas—birds, botany and horticulture, voyages of exploration, works of Charles Darwin—but little devoted to conchology. S. Peter Dance’s Shell Collecting: an Illustrated History (London, 1966) and a rare book dealer’s catalog by Antiquariaat Junk of the Netherlands, are two of the few resources.

This lack of scholarly studies in conchology publishing is remarkable, given that shells have been collected since the dawn of humankind, either for utilitarian purposes or for their beauty. In the Age of Discovery, European voyagers found an eager market for specimens collected in the South Seas. That the Empress of Austria commanded a publication on shells is an expression and record of her interest in Imperial trade and expansion to far-flung locales as well as a contribution to the science of natural history.

Past Smithsonian curators, Isaac Lea (1792-1886), conchologist and geologist, and William Healey Dall (1845-1927), a renowned malacology paleontologist, were avid book collectors. The Cullman Library holds many books from their former collections and would be an excellent place to start compiling a bibliography. Dall’s copies of Filippo Buonanni’s Recreatio Mentis, et Oculi (Rome, 1684) and Thomas Martyn’s The Universal Conchologist (London, 1784) would be highlights; Born’s Testacea Musei Caesarei Vindobonensis another, once owned both by Lea and Dall. Many of these titles have already been digitized by the Biodiversity Heritage Library, available for exploring the imaginative worlds found in books on shells.

All images in this post are from the Cullman’s copies of Testacea Musei Caesarei Vindobonensis and the one scanned for the Biodiversity Heritage Library (BHL). This BHL copy, held by Naturalis Biodiversity Center, BHL Euorpe, has, unusually, uncolored plates. 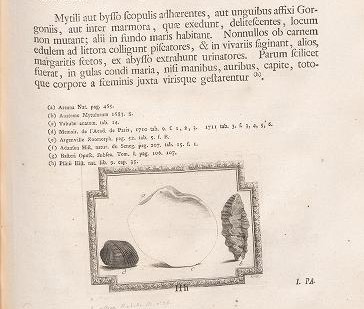 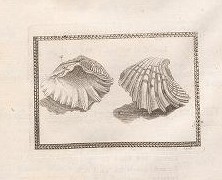 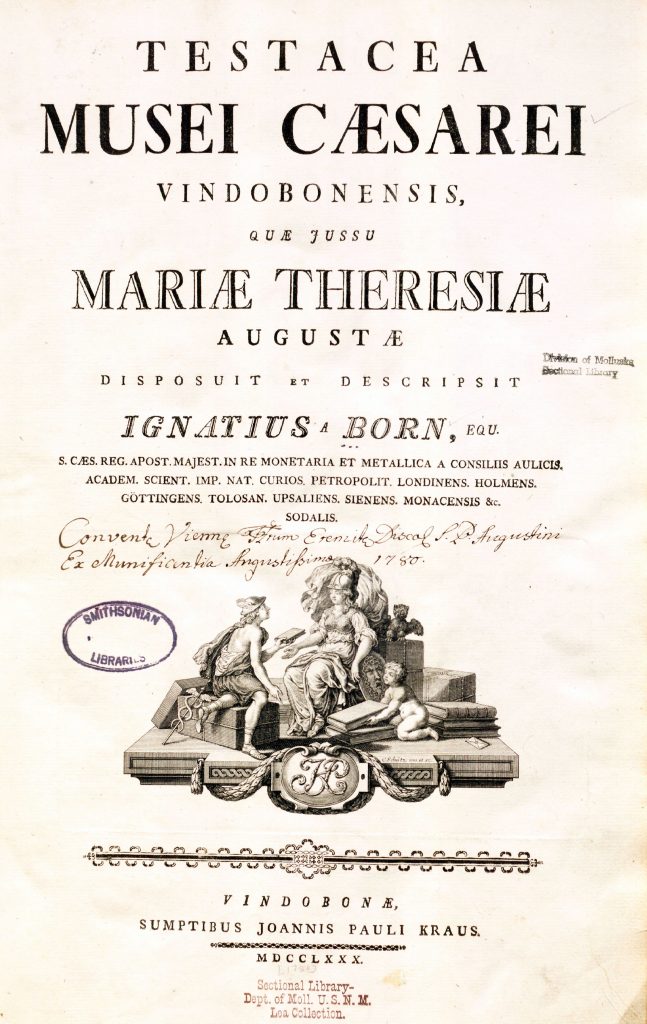