A Woman’s Work in Sixteenth-Century Paris

The patron saint of both printers and brewers is Aurelius Augustine, born in 354 CE in present-day Algeria. He studied and taught philosophy and rhetoric there and in Carthage, Rome and Milan. After being baptized as a Christian, Augustine returned to Africa to live a religious life, eventually becoming Bishop of Hippo (Annaba, Algeria). He died there, while the Vandals were laying siege to the city as the Roman Empire crumbled.

Saint Augustine is said to have written 232 books and penned over 500 sermons, hence his patronage of printers. Influential in the development of Western culture and one of the great theologians of the Church, Augustine’s most well-known works are Confessions (of his dissolute life, therefore his association with brewers) and The City of God. 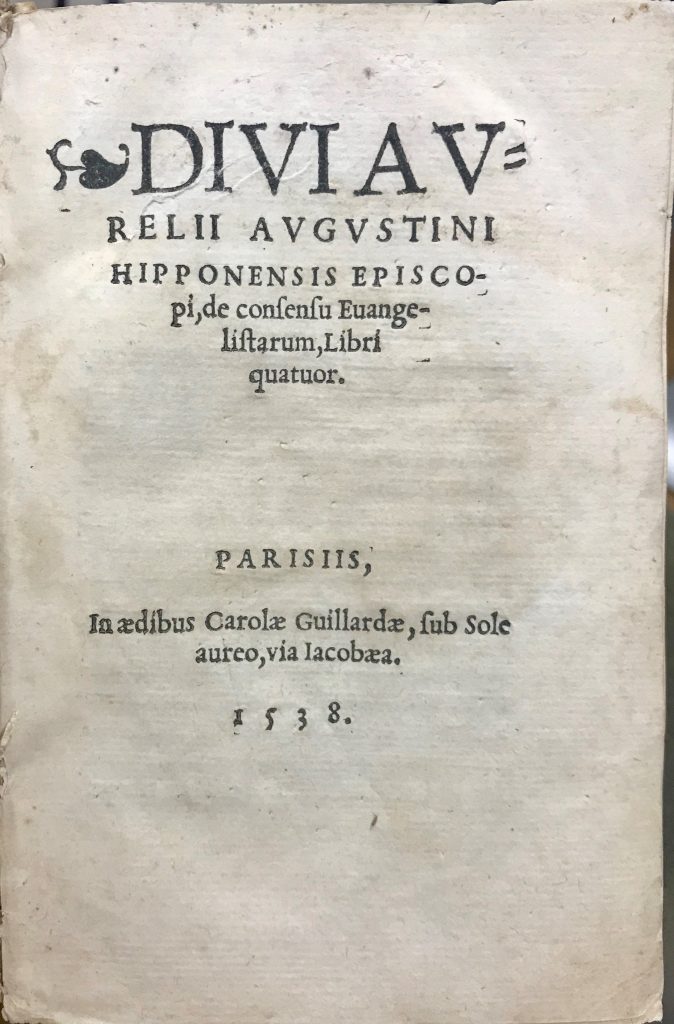 To augment the Smithsonian Libraries’ history of printing examples, Lilla Vekerdy of the Dibner Library of the History of Science and Technology recently acquired another of his writings, Divi Aurelii Augustini Hipponensis Episcopi, de Consensu Evangelistarum, Libri Quatuor (Harmony of the Gospels). This book, in a contemporary vellum binding, was produced in Paris in 1538. This is an exciting addition as it is the only example in our collections of the work of Charlotte Guillard, generally cited as the first woman printer of importance. The French printer was a successful businesswoman and a prominent and respected member of her community, managing printing operations for nearly fifty years.

Women were involved from the beginnings of book production and trade in Western Europe. They worked in the setting of type, illuminating manuscripts, engraving, hand-coloring of illustrations, printing, proofing texts, sewing, bookbinding, and selling. Nuns of the press of the Convent of San Jacopo di Ripoli in Tuscany were compositors, worked the presses and managed the operation from 1476 to 1482. While women as daughters and wives likely always had a role in printing houses, the Ripoli Press is the earliest known through surviving documentation. In general, the guild system allowed women to take charge of their husbands’ businesses only in widowhood. The appearance in volumes (in title page imprints and colophons) of the names of printers and publishers allows researchers to track careers to some extent. Occasionally, through archival material such as legal petitions and rulings, estate transactions, family records and correspondence, and other official and personal material, there is recorded evidence of women’s work.

In 16th-century London, Joane Jugge inherited her husband’s printing house. Before his death, she was a partner both at home and at work, developing skills and becoming thoroughly familiar with the operations of the business. But it was only when she took charge that her name appeared in books. For example, the title page imprint of The Arte of Navigation of 1584 states: “printed by Johan Jugge Wydowe.” The colophon reads: “Imprinted at London, by the Widowe of Richarde Jugge, late Printer to the Queenes Maiestie.” Still, Jugge was identified not by her occupation but by her relation. She was one of seventeen female printers, publishers, and booksellers in 16th-century London, something of a backwater in the amount and quality of book production at the time, at least compared to the rest of Europe. 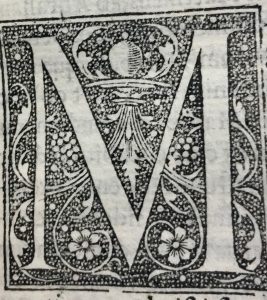 Charlotte Guillard, the printer of De Consensu Evangelistarum, was one of an estimated fifty-four women in the book trade in 16th-century Paris. She worked from 1502, when she married printer Berthold Rembolt. Their print shop was at the sign of the Soleil d’Or. Guillard took over operations when Rembolt died around 1518. Soon, in perhaps a strategic move since she would have lost the business if she remarried outside of the profession, Guillard became the wife of printer and bookseller Claude Chevallon, who operated a nearby shop. In contrast to guild regulations of cities in other countries, Paris did not impose a time limit for widowed women, if they remained single, to hold onto their businesses. Property and inheritance laws in Paris allowed for women to have more control over their livelihoods. However, because printing tied up a tremendous amount of capital as a book could be in production for years; joining resources was not uncommon. The new printer’s device of Soleil d’Or combined the two husbands’ names. After Chevallon died, Guillard used just her maiden name in her printing house’s publications, employing the Latinized Charlotte, Carolam or Carolae.

The Dibner Library’s new acquisition is an example of a typical work of Guillard’s—a theological title—as she filled the demands of monasteries and libraries of other religious houses. Along with canon and Roman law, it is one of some 160 theological titles she published. Guillard also met the needs of students and faculty of the Latin Quarter with the nearby Sorbonne. She produced a small number of scientific works, whose authors include Leonhart Fuchs, Conrad Gesner, Nicolas Plet, Galen, and Hippocrates. Most of her titles were in Latin, with some in Greek (something few printers of the time were capable of) and a few in French; she catered to a scholarly crowd and was recognized for the quality of her undertakings. Guillard’s productions would have also supplied an export market.

The printing establishment of Soleil d’Or was located on the ancient rue Saint-Jacques, then the main passage of the Latin Quarter. The narrow street was the embarkation point for pilgrims in their long journey to Santiago de Compostela in Galicia, where lay the remains of the Apostle Saint James. The street was central to the history of early French printing. After moving from the Sorbonne where the first printed book in France was produced (a collection of letters of the grammarian Gasparinus de Bergamo in 1470), printers set up the first independent shop under the sign of Soleil d’Or on rue Saint-Jacques, the famous shop that Guillard eventually took over. Other printers and booksellers soon followed, making the area a hub of activity of the book trade. Guillard worked under the “Golden Sun” until 1556 and died the next year. She was matriarch of both a thriving business operation and an extended family that she supported financially.