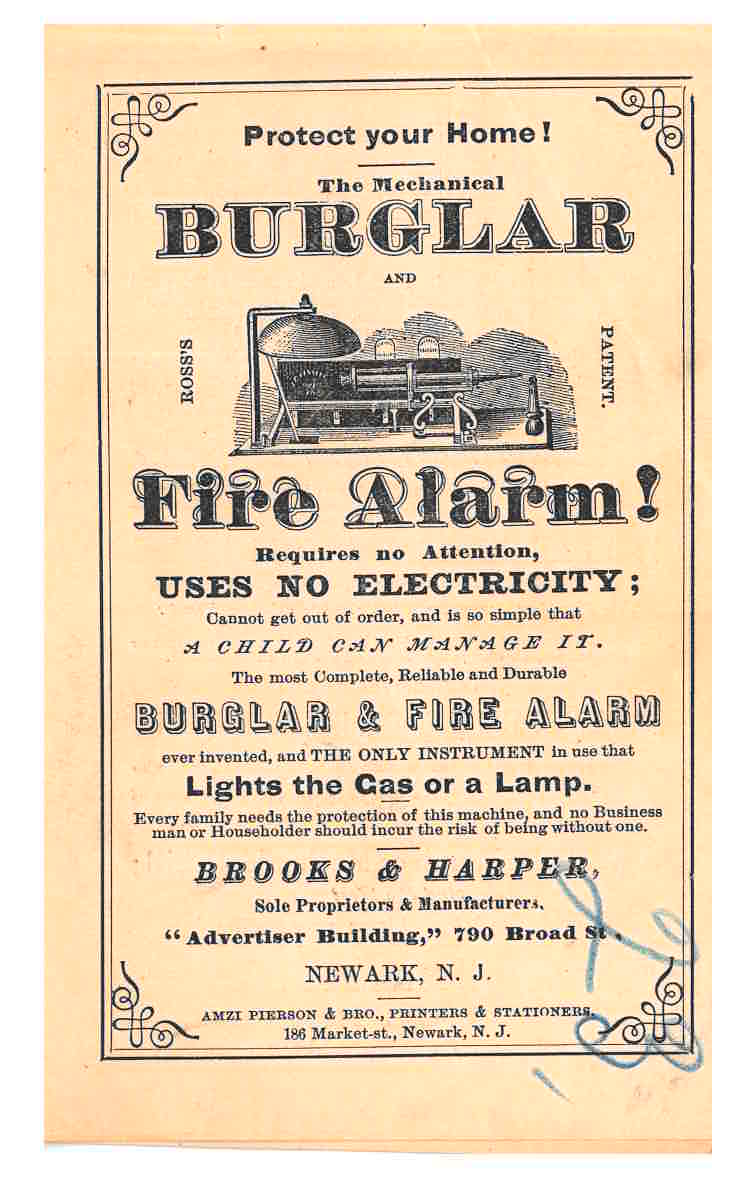 Would you guess burglar alarms existed in the 19th Century? Though not as sophisticated as those of today, burglar and fire alarms did exist, as we can learn from this trade catalog.

So how does this late 19th Century Mechanical Burglar and Fire Alarm actually work? Advertised as using no electricity, it was supposed to be so easy to use “a child can manage it.” The actual machine was small measuring about 6 inches by 18 inches with a pointer to turn it on and off. Doors and windows/blinds in a building were connected to the system via concealed, tight steel wires.

If the machine detected a cut wire or loosening of a wire (meaning a door or window had been opened), the alarm sounded. To alert the residents, the alarm system instantly,

6 – Shows which Door or Window was opened.”

Besides ringing a gong, the alarm system actually turned on lights to alert the residents! The lights turned on only in the room where the machine was placed, but there was the option of sounding the gong throughout the entire building. The machine also indicated exactly which door or window was open and included double indicators to show if that same door or window had been re-closed.

There were several other features. The alarm system would not turn on unless all wires were intact and every door or window connected to it was closed. This prevented residents from forgetting to lock a door or close a window before bed. If they chose to leave a window open, it was still protected as long as the blinds were closed. If desired, it was also possible to disconnect a particular door from the system. This was helpful if a family member was expected home late.

However, it was more than a burglar alarm. It also functioned as a fire alarm. If the building caught on fire and the fire reached a wire connected to the system, the alarm immediately sounded.

Customer testimonials from the years of 1871 and 1872 are included in this trade catalog. Besides general satisfied comments, some wrote about specific incidents of burglary or fire. This testimonial describes a fire:

E. C. L. Mustin of Cincinnati, OH wrote on September 20, 1871, “The Ross Burglar and Fire Alarm in my house meets all my expectations. It may please you to know that to it I owe the saving of my property. On October the 25th, 1870, about three o’clock A.M., the alarm sounded and indicated something wrong in the basement. Upon investigation the staircase and floor were found to be on FIRE. A few pails of water quenched the flames, which, but for the timely warning, would probably have destroyed the house and all it contained.”

Protect Your Home! The Mechanical Burglar and Fire Alarm! (circa 1872) by Brooks & Harper is located in the Trade Literature Collection at the National Museum of American History Library.