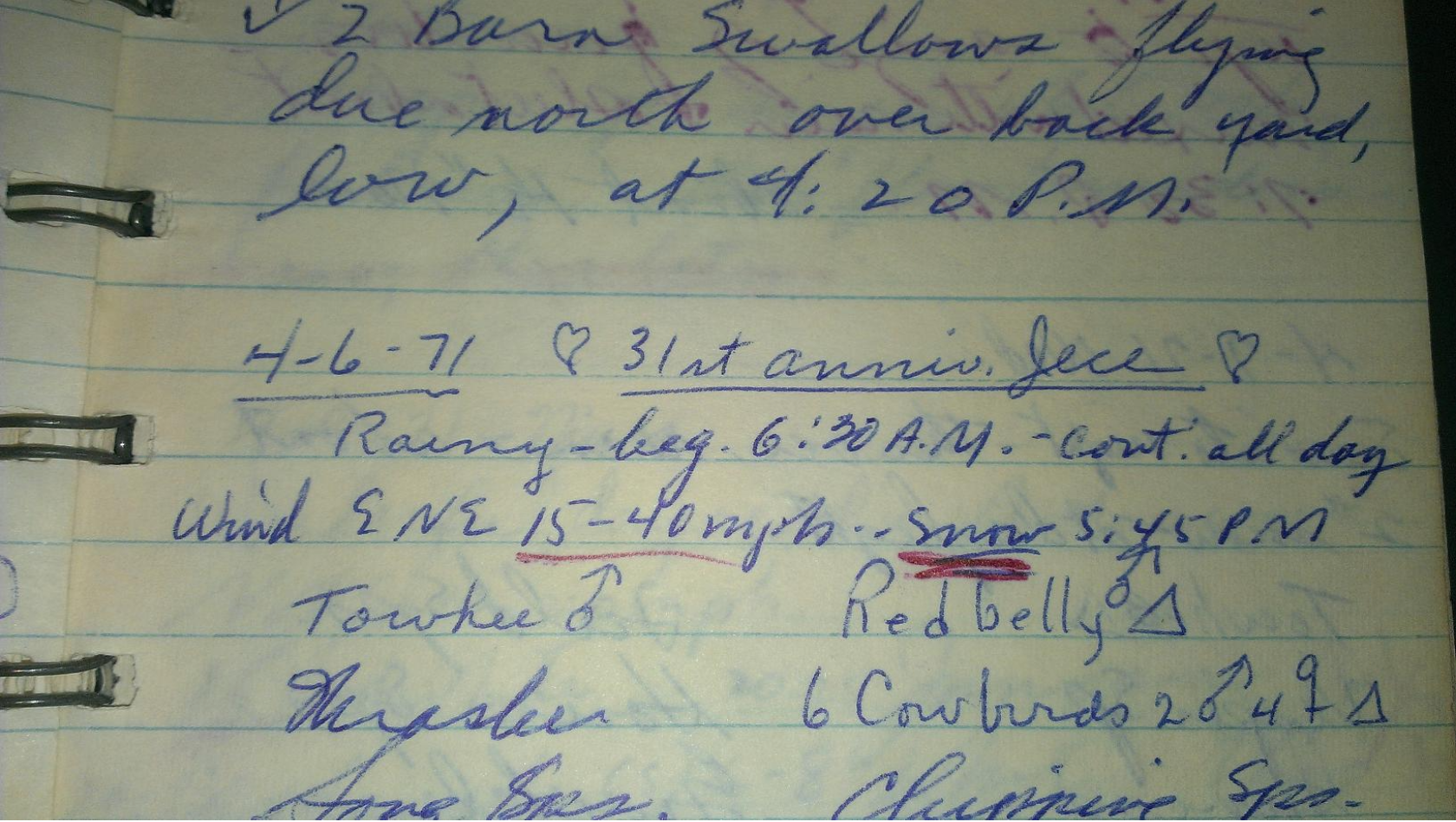 This post first appeared on the  Smithsonian Institution Archives’ blog.

Being an avid reader, every once in a while an item comes across my desk for digitization with such an intriguing story that I can’t help but get sucked into it. That’s what happened when I first saw one of James Eike’s field books. Now I know what you are thinking, “how does one get sucked into a field book?” Often times, field books are filled with lists of specimens or observations from the field, and those created by James Eike, an avid bird watcher and citizen scientist, are no exception. However, among the almost daily counts of birds observed by Eike are glimpses into his personal life, where, according to him, just about every day was glorious.

James Eike was born in Woodbridge, Virginia on September 29, 1911 to Carl and Sarah Eike. Shortly after starting at Georgetown University in 1928, he began recording his observations about the wildlife he saw around northern Virginia, especially birds and snakes. Unlike the lists of bird counts found in his later field books, Eike’s first few journals are more narrative in form. By 1930, he was keeping lists of the numbers and types of birds seen, as well as the date and location where he saw them.  Eike graduated from Georgetown in 1932 and started working for the U.S. Public Health Service in 1934.

On April 6, 1940, James Eike married the love of his life, Claire. Their daughter, Susan, was born almost six years later on January 31, 1946. At that point, spotting and counting birds seemed to become somewhat of a family affair for the Eikes. Occasionally, James Eike would take his young daughter with him when he went to the nearby woods to count the birds, and on the weekends, sometimes the whole family would go together. Additionally, one page of Eike’s field book from “3-20-57 to 7-20-57” includes a list of birds that Claire saw while on a trip to Michigan in July while her husband stayed in Virginia. Claire and Susan also became members of the Virginia Society of Ornithology (VSO), a group which James Eike had actively participated in since 1933.

In addition to the lists of birds, Eike’s entries and field books started to include notes about his personal life. Starting in 1957, in the back of just about every field book that spanned Christmas, he would record the list of gifts he, Claire, and Susan received that year. He also included little notes about their birthdays and his anniversary at the top of his entries for those days. Eike would even make notations about trips the family was taking, and after Susan left for college, his entries about her return home and departure back to school usually include a happy and sad face, respectively.

On February 8, 1983, James Eike died of cancer. Starting on January 21, 1983, Susan and Claire took over recording the daily bird counts for James, and even after his death, Claire continued to record the counts in the field book that James had started. She even noted their 43rd wedding anniversary on April 6, 1983. In her last entry in the book, Claire writes “My dearly beloved – I’ll keep trying to get a good list. I am feeding our birds well. I miss you.”

In 1984, the VSO created the James Eike Service Award in honor of the time and dedication James put into the society. The first recipient of the award was Claire Eike, in honor of her late husband. Eike’s love of both birds and family make his field books a joy to explore. The personal stories and reflections add to the layers of valuable information captured in his notes, making me fall in love with field books and the insight they can bring about both science and life.