Is a new kitchen gadget on your holiday wishlist? How about tools for making ice cream? Let’s look at a 1912 trade catalog illustrating some equipment for making and dispensing ice cream.

END_OF_DOCUMENT_TOKEN_TO_BE_REPLACED

I Scream, You Scream… 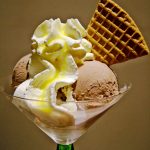 We all scream for ice cream! Without question, ice cream is one of the most popular treats in America, but do you know much about its history?

According to Laura B. Weiss, author of Ice Cream: A Global History, iced drinks can be traced back to at least the ancient Greeks and Romans. But many historians believe that the emperors of the Tang Dynasty (618-907 AD) in China may have been the first to eat a frozen milk-like confection — made with fermented cow, goat or buffalo milk which had camphor added to make it flake like snow. Italians generally are credited with inventing ice cream as we know it today, popularizing a concoction of sugar, flavorings (often fruit like lemon or strawberry), and ice or snow sometime in the mid-seventeenth century. Ice cream was particularly favored by the French aristocracy in the 1800s, and Thomas Jefferson is said to have gained an appreciation for the treat while serving as US ambassador to France from 1784-1789.

END_OF_DOCUMENT_TOKEN_TO_BE_REPLACED

July is National Ice Cream Month and the Libraries wants you to break out your ice cream maker and try out some recipes … from 1907.

END_OF_DOCUMENT_TOKEN_TO_BE_REPLACED

July is For Ice Cream

At least that's what we think is being featured on the cover of this wonderful item from the Culinary Historians of Washington (CHoW). The original impetus for this post was END_OF_DOCUMENT_TOKEN_TO_BE_REPLACED