Putting bombs on the target was the job of the aircraft bombardier. Not only did they release the bombs from the aircraft, but the bombardier had several other jobs on the aircraft. From the book The Man Who Flew the Memphis Belle: “Who was a bombardier? In addition to his duties as a bomb dropper and gunner, they would assist with other various duties on the aircraft such as perform oxygen checks or assist the navigator or radio operator with getting (location) fixes and their (mission) logs. Basically any of the basic duties that the other crew members could perform, so could the bombardier.” To see what the bombardier saw in a B-17, look at the bombardier’s “office”, courtesy of a B-17 appreciation site. 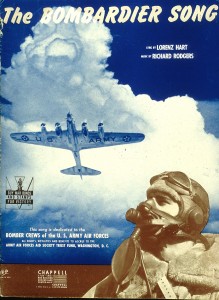 This new flying hero role was then celebrated in film (Bombardier, 1943) and in song by famed composers Richard Rodgers & Lorenz Hart with their 1942 tune The Bombardier Song, found in the National Air & Space Museum Library Bella C. Landauer sheet music collection.  As the cover notes, all song royalties went sent to the Army Air Forces AID Society Trust Fund. Then as now, we should do what we can to support all of our veterans who served their country, through peace and war.

This post was written by Chris Cottrill, Head Librarian at the National Air and Space Museum Library.