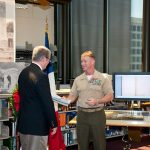 A few months ago, a ceremony announced the Libraries’ electronic edition of the Escadrille N.124 Journal de Marche et Operations (i.e., the “combat logs”) of the legendary squadron of American aviators who served in the French Air Force  during World War I, known more affectionately as the Lafayette Escadrille.

The commemoration involved the laying of a ceremonial wreath recognizing France and the French Air Force and honoring all of the American airmen who served alongside the French, especially those who fell in combat. A Boy Scout of America, Robert Edwards, rendered a solitary salute, along with a representative force of officers and enlisted men of the U.S. Marine Corps, and officials from the National Air and Space Museum and Smithsonian Libraries represented the United States of America.

The occasion also marked the donation of a scholarly manuscript about their combat operations entitled L’Escadrille Lafayette : Unité Volontaire de Combat Oubliée de l’Amérique written by naval aviator Colonel Philippe D. Rogers, U.S. Marine Corps, who comprehensively studied these logs along with many other unique French source materials to place these airmen (the first Americans to engage in air-to-air combat) in historical context.