The Biodiversity Heritage Library for Africa (BHL-Africa) officially launched during a ceremony hosted by the South African National Biodiversity Institute (SANBI) at the Pretoria National Botanical Garden in Pretoria, South Africa on April 15.Working within the global BHL consortium, BHL-Africa aims to provide open access to the valuable information held in Africa’s biodiversity institutions, ensuring that this knowledge is available to a global audience.

“Our participation in BHL will increase awareness about Africa’s fragile biodiversity by making information that was previously available only in physical format widely accessible online,” said Anne-Lise Fourie, Assistant Director for SANBI Libraries. “This is of great value to Africa, as we are a continent of long-distance learning.” 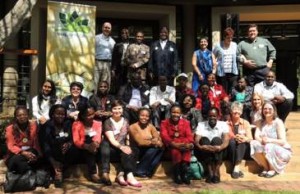 BHL representatives from the United States attended the launch, including Dr. Nancy Gwinn, Director of the Smithsonian Libraries and Chair of the BHL Executive Committee. “Libraries in Africa have a wealth of little-known information about the flora and fauna of African countries, often published in small print runs or existing in reports or other documentation,” said Gwinn. “Inclusion in the Biodiversity Heritage Library will release to the world information critical to understanding the African continent and its role in the global environment.”

“BHL Africa will open floodgates by making local biodiversity literature available to a wider audience,” commented Monda. “It will provide an avenue for researchers and institutions to exchange ideas that can help improve livelihoods through information preservation, exchange and dissemination.”

About the Biodiversity Heritage Library

BHL partners comprise 15 natural history libraries in the U.S. and the United Kingdom. They are committed to working together to digitize the published literature of biodiversity held in their respective collections and making that literature available for open access and responsible use as a part of a global “biodiversity commons.” The BHL Secretariat is hosted by Smithsonian Libraries. The Technical Director and portal development team are hosted by Missouri Botanical Garden. Affiliated BHL projects have been established in Europe, China, Australia, Brazil, and Africa. To further explore the BHL, visit http://www.biodiversitylibrary.org/.

Learn more about us and our collections.
END_OF_DOCUMENT_TOKEN_TO_BE_REPLACED