The Riots at New York 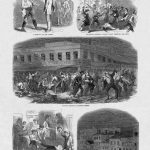 This post was written by Erin Friel, an intern at the American Art and Portrait Gallery Library, January-May 2013.

Currently on display at the National Portrait Gallery (NPG) is the installation “Bound for Freedom’s Light: African Americans and the Civil War,” which showcases portraits of familiar figures such as Frederick Douglass and Sojourner Truth, as well as contemporary news illustrations of lesser-known events. Those who would like to learn more about some of the topics in the exhibit can find information in the excellent resources at the American Art Museum/National Portrait Gallery Library (AA/PG).

Included in the NPG exhibit are illustrations from the August 1, 1863 Harper’s Weekly which depict the riots that had broken out in New York City in response to an attempt to draft soldiers into the Union army. Now a little-known anecdote from the Civil War era, the riots were breathlessly reported in newspapers and magazines of the day such as Harper’s Weekly, The New York Times, and The New-York Daily Tribune, all of which are available in electronic format at AA/PG library.

For example, The New-York Daily Tribune from July 16, 1863 gruesomely notes, among many other incidents, that “a mob suddenly pounced upon several families of colored people … beating every one upon whom they could lay their hands in a brutal manner.” The same article notes “the hanging of a negro in the morning and another…in the evening.” Later in the day, “a negro was dragged out of his house…beaten down on the sidewalk, pounded in a horrible manner, and then hanged to a tree.” 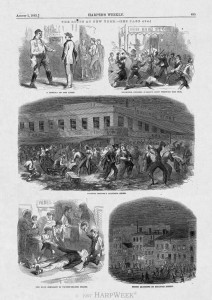 The New York Times notes with relief the restoration of order to the city a few days later, with “several regiments of our State Militia” having returned home, which “gladdened the hearts of our citizens and struck terror to those of the mob”. Not surprising, however, are the opinions of the riots held by the newspaper publishers in the Confederate capital. According to excerpts in the July 22, 1863 New York Times, the July 18 Richmond Dispatch cheered the riots, calling for “more of these outpourings… . It saves the Confederate troops a deal of marching and fighting… . The sacking and burning has been heretofore at the South. Our compliments to our Northern ‘brethren,’ and may they enjoy their turn.” That same day’s Richmond Enquirer called the “riot, murder and conflagration” “good work”  and an “excellent outbreak” which may lead to “the inevitable revolution which is to tear to pieces that most rotten society, and leave the Northern half of the old American Union a desert of blood-soaked ashes. We bid it good speed.”

The NPG exhibit displays images of individuals and events both famous and lesser-known; with the help of resources at the AA/PG library, a visitor can learn more about the stories behind the pictures.

“The Riots in this City: How the News is Received in Richmond” New York Times July 22, 1863

Learn more about us and our collections.
END_OF_DOCUMENT_TOKEN_TO_BE_REPLACED