When asked about his summer research on the Ferris wheel, Resident Scholar Joseph Dimuro’s eyes gleamed like a child who had just ridden one for the first time. He replied, “Not just any Ferris wheel – the 1893 World’s Columbian Exhibition Ferris Wheel in Chicago: the major engineering feat and symbol of America at the end of the 19th Century.”

Joseph, an 11-year continuing lecturer in the English department at the University of California, Los Angeles, dove into the Smithsonian Libraries’ World’s Fair materials this summer at the Dibner Library of the History of Science and Technology in the National Museum of American History. The library holds one of the nation’s most extensive archives of World’s Fair materials he’s ever seen. Joseph became fascinated with the original Ferris Wheel of 1893 while completing his doctoral degree in English Language and Literature at the University of Chicago, a close distance from where the Wheel debuted on the Midway Plaisance over 120 years ago. 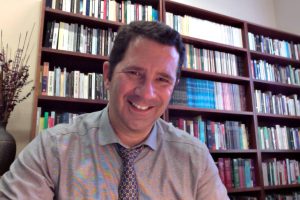 This past summer, Joseph was researching his upcoming book, tentatively entitled Turning American: Ferris’s Wheel and the Evolution of National Feeling, 1880-1910. To grasp the symbolic importance of Ferris’s great invention, the book situates the Wheel’s engineering design, spatial emplacements, historical moment, and sensational effects in the context of important spatial discourses of national identity that were circulating in the United States at the close of the 19th century. These include the Frontier Thesis of Frederick Jackson Turner, William James’s work on spatial perception, newspaper accounts and stories about riding the Ferris Wheel, and contemporary analyses of the built environment of the Columbian Exposition.

In 1890, Congress agreed to commemorate the 400th anniversary of Columbus’ discovery of America. After a hard-fought campaign waged by hometown boosters, the rough-edged city of Chicago was finally granted the right to host the Exposition, prevailing over the more established cities of New York and Washington, D.C. When Daniel H. Burnham, Chief Architect for the Columbian Exposition, challenged American engineers to come up with a symbol of the Fair that would surpass the Eiffel Tower built four years earlier for the 1889 Paris Exhibition Universelle, a young bridge-builder in the audience named George Washington Gale Ferris, Jr. is said to have spontaneously sketched an outline of a gigantic bicycle wheel on a dinner napkin. His resulting creation, a steam-operated machine made of an intricate web of forged steel, massive gears, wooden planks, and plate glass windows rose 260 feet above the ethnographic villages and entertainment venues of the Midway, each of its 36 passenger cars holding 60 people at a time. At once monstrous and fragile-looking, the modern Ferris Wheel fascinated fairgoers at a time when automobiles had not yet displaced horses and carriages, and before airplanes roamed the skies. 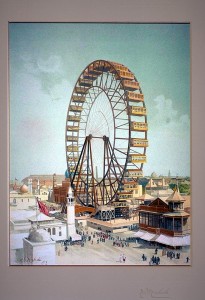 Joseph noted the enormous implications of the Ferris Wheel of 1893 – its popularity and its demise. He spoke of the intrigue of the location of the wheel in that time in history; it was situated on the Midway Plaisance near the foreign villages of the area at the time: African tribes, and Irish, German, and Egyptian villages. Joseph’s research into the vast online collection of historical newspapers made available at the Dibner Library uncovered accounts of people who experienced hysteria while riding on the wheel. Using the World’s Fairs Collection at the library, Joseph also consulted official catalogues for various departments of the Columbian Exposition, inventories of exhibitions, and souvenir brochures to reconstruct the spatial dimensions and arrangements of the fairground, especially with regard to the relations between white Americans and foreigners. He also looked into the building of the wheel: materials used were the same as those used for the building of the first generation of skyscrapers and the infrastructural elements of the Industrial Revolution (primarily steel) and the passenger compartments resembled Pullman railroad cars. He saw symbolism in the movement of the wheel turning westward in one rotation and coming back to the east in another, as well as the symbolic implications of its up and down movements. At the time of the Exhibition, the so-called “safety valve” of the western frontier was rapidly giving way to overcrowded cities, increasing social conflict, and, in some cases, reverse migration.

The Ferris Wheel of 1893, a figure of awe and prominence in that year, quickly went from an icon of national pride to becoming obsolete. It was reassembled one last time for the St. Louis World’s Fair in 1904, and, after being left to rust when the fair was over, was blown up only two years later in 1906. The Ferris Wheel of 1893 was no longer a novelty at the beginning of the 20th century: automobiles and airplanes now captivated the national audience. Even so, Ferris wheels have enjoyed a remarkable international revival over the last few decades, rising in major cities throughout the world.

Aside from his insights into the history and events surrounding the Ferris Wheel of 1893, Joseph spoke of the enormity of resources in DC – in the Dibner Library, in the National Museum of American History Library, as well as at external sources such as the Library of Congress. His other interests include cooking, cartooning, graphic design, photography, and trying to keep up with his twin dachshunds, Clover and Daisy. Joseph’s long-term goals include finishing scholarly work on the Ferris wheel and its relation to the national imagination and writing a novel loosely based upon Ferris’s life. At UCLA he teaches courses on the theory of the novel, the theory of culture, American literature, and Henry James. Prior to his academic appointment at UCLA, he taught as a visiting lecturer in the English department at the University of Pennsylvania, and at Haverford College. He received a bachelor of arts in English and history from Assumption College.

Learn more about us and our collections.
END_OF_DOCUMENT_TOKEN_TO_BE_REPLACED