This post is submitted by Lilla Vekerdy, Head, Special Collections.

The Dibner Library of the History of the Science and Technology has acquired a nineteenth-century manuscript with artistically and scientifically outstanding watercolor illustrations.

Karl Möring’s Über die Fortschritte der Technik in den Vereins-Staaten von Nord-Amerika in Bezug auf einige Einrichtungen bei der Armee und Flotte [On technological progress in the United States of North America with regard to some mechanisms in the army and navy] is a signed handwritten book in German, created in 1844-45. It contains 135 numbered pages and 12 large folding and exquisitely colored watercolor and ink engineering drawings. According to a note in the author’s hand on the flyleaf, this is one of two extant copies of this extraordinary manuscript (the other, which Möring donated to Archduke Ludwig of Austria, is now in Austria’s Kriegsarchiv). 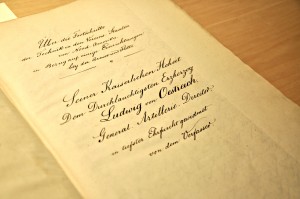 An Austrian lieutenant field marshal, diplomat, and journalist, Karl Möring (1810-1870) played a significant role in the Revolution of 1848 as it played out in the Habsburg Empire and the neighboring countries. He graduated at the Ingenieur-Akademie in Vienna in 1829 and was a member of the Austrian army’s engineering corps, participating in military building projects in Milan, Split, Venice, and Vienna. Möring also partook in the Austrian invasion of Syria. While serving in the army he became increasingly disenchanted with the Austrian Empire’s corrupt and reactionary regime, headed de facto by Prince Metternich, and risked the disapproval of his superiors by expressing his liberal ideas on the political, social, and economic questions of his day.

In 1841-43, Möring was sent on a tour of Western Europe and North America in order to learn about engineering and technological advances in these regions. While visiting American military bases and arms factories, he recorded his observations of technological innovations in the present manuscript. The content of this work was also published in print in 1848 under the same title. 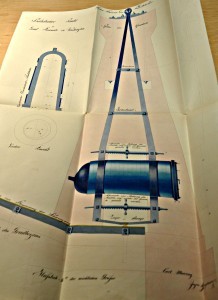 During the 1848 revolution in Vienna, Möring wrote several pamphlets under the pseudonym “Cameo,” and published his best-known work, the two-volume Sybillinische Bücher aus Oesterreich (1848), in which he attacked the Metternich government and called for the formation of a new Austria. Another two political writings were published with the titles Entweder – oder! (1848) and Offener Brief an das Wiener Minsterium (1848).

Möring also served briefly as a delegate to the Frankfurt national assembly. After the collapse of the revolution and the restoration of the monarchy, Möring continued to serve in the army engineering corps. In 1868, two years before his death, he was appointed a governor of Trieste.

The remarkable colored drawings in Möring’s manuscript contain several details bringing the total number of illustrations to more than sixty, most with captions. According to Möring’s foreword in his manuscript, most of the drawings of the original equipment or machinery were made on site. Five of the images depict innovations made by the United States Navy (Ericsson’s steam engine and ship’s propeller, and W. W. Hunter’s steam frigate “Union”). The remaining seven show technological improvements made by the American Army. The precision and high artistic value of these illustrations pulls together science and art in a wonderful merger providing a fertile research resource for scholars of diverse disciplines. 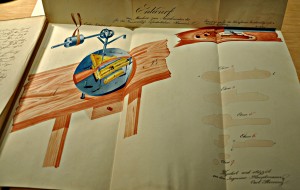 The Möring manuscript will become a prized item in Dibner Library’s unparalleled scientific manuscript collection which was donated to the Smithsonian by Dr. Bern Dibner (1897-1988), noted engineer, science historian, and book collector, in 1974.

Thanks to Jeremy Norman for providing information for this article.