The Chakras at the Cooper Hewitt National Design Library 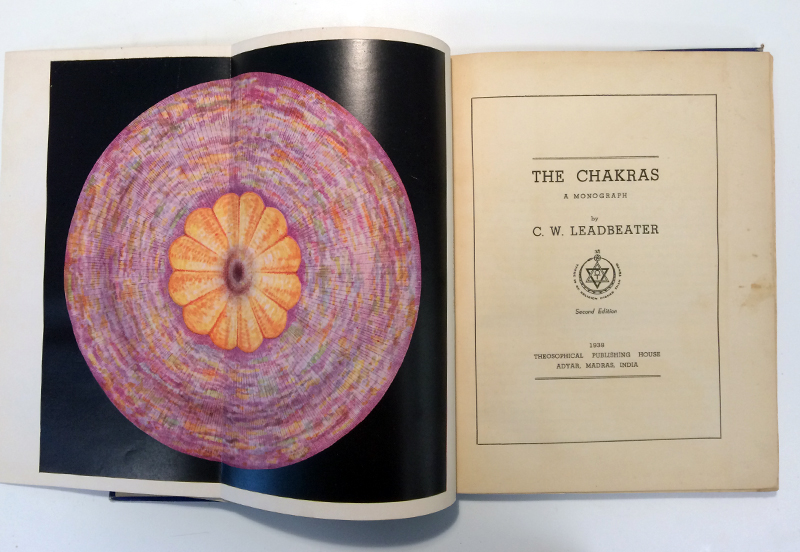 Last year, our librarian Stephen Van Dyk picked up this slender blue hardcover at a rare book auction. He didn’t know exactly what a “chakra” was, but still he found the worn old book remarkable, if not a bit weird, for its striking illustrations of big painted circles.

I was surprised to see this book in the office of the Cooper Hewitt, Smithsonian Design Library, which is housed next door to the museum. As a yoga practitioner and incurably curious person, I offered to do some basic research to contextualize the concept of chakras, shed some light on the book’s notable author, and situate this unusual monograph in history.

Printed in 1927 in Adyar, India by the Theosophical Publishing House, this second edition of The Chakras is a 102-page hardcover containing 10 “plates,” or full-page illustrations, each protected with a tissue paper insert. The book’s author is C.W. Leadbeater, an English priest who left the Anglican church around 1883 to study occultism, esotericism, and eastern spiritual traditions.

He was a man who made the most startling claims for himself, and made them in a very matter-of-fact way; he declared that he had penetrated the depths of the atom by his psychic powers, discovered the ultimate unit of physical matter whilst sitting in a park on the Finchley road in London….The range of his writing, and the wealth of material that flowed from his prolific pen, was vast…..His subject matter ranged from Buddhist catechetics, pedagogy and Masonic history to the origins of Christianity, the causes of war, and the nature of the soul; from life after death, reincarnation, heaven and hell, to the evolution of man, the unseen effects of sunlight and the value of vegetarianism….The modern occult revival owes more to him than to anyone else.

A freemason, Leadbeater was part of The Theosophical Society, an esoteric society founded in New York City in 1875. At the time of its founding, the society described itself as concerned with the study of “universal brotherhood,” comparative religion, and “the unexplained laws of nature.” The organization, despite various internal divisions and schisms over the years, is considered a cultural forebear of the New Age movement, and even partially responsible for the mainstream popularity of Eastern traditions like Buddhism and Yoga throughout the West today.

According to Leadbeater, the book’s illustrations were painted according to detailed accounts from individuals who possessed clairvoyant powers. “Anyone who possesses a slight degree of clairvoyance may easily see [the chakras] in the etheric double,” he wrote. (“The etheric double,” for those of us lacking oracular gifts, is described earlier as a “mass of faintly-luminous violet-gray mist, interpenetrating the denser part of the body, and extending very slightly beyond it.”)

The word “chakra” derives from the Sanskrit cakra, meaning “wheel or circle.” If you’ve been to a yoga class, you may have heard it mentioned.Interestingly, the postural yoga system (asana) well-known for its explosive popularity in health clubs around the modern world is itself quite a modern development. The bulk of contemporary asana’s development occurred in the 19th and 20th centuries as part of a globally-minded revival movement in which Indian teachers (some of whom would become international celebrities) sought to reclaim and refashion a variety of indigenous traditions. Theirs was a proud and creative new gesture against the subsuming tide of British colonial presence. [2]

If you’re interested in the non-pop-cultural answer to the question, “what is Yoga?” I recommend the Freer|Sackler’s 2013 exhibition catalog for Yoga: The Art of Transformation. The essays and selected artifacts in the book do an excellent job of demonstrating why the answer to that question is pretty complex— culturally, philosophically and historically speaking.

Because of yoga’s (more specifically, asana’s) widespread popularity today, it would be tempting to assume that the notion of chakras is some sort of sub-discovery within the tradition of asana, when in fact it’s more the other way around.

So what is a chakra? According to Ayurvedic tradition, chakras are circular fields of bodily energy. Leadbeater’s guide describes each one in plentiful detail: its placement on the body, size, shape, colors and even vibratory pulsations. Leadbeater points out that healthy chakras are large and vibrating with iridescent light, whereas the chakras of those who are less healthy and less spiritually developed will be noticeably smaller, duller, and weaker-looking.

This book was one of the first attempts to explain the ancient concept of chakras for a Western audience. From Leadbeater’s introduction:

“Much has been written about the chakras, but it is chiefly in Sanskrit or in some of the Indian vernaculars. it is only quite recently that any account of them has appeared in English…The symbolical drawings of them which are used by the Indian yogis were reproduced in [my earlier book] The Serpent Power, but so far as I am aware the illustrations which I give in this book are the first attempt to represent them as they actually appear to those who can see them.”

This use of Western technology (in this case, high res full-color lithography) to illustrate or “prove” ancient belief is itself an interesting habit of modern onlookers eager to produce familiar forms of understanding. Today’s use of advanced neurological scans to study the brains of Buddhist monks comes to mind as a contemporary example of Western science exerting its most advanced technological tools on ancient tradition, as if this tool could determine absolute value in a relative world.

Though at first it may seem like a non-sequitur for a design museum, this rare book tells a story of inter-continental cultural exchange and the technologies in its service, during a moment of early globalization that would have great impact on future generations and our collective imagination.