History in the Making…

In addition to rare books and special collections housed in the DeWitt Clinton Ramsey Room, one of the valuable resources located in the National Air and Space Museum’s Library is its rich and diverse collection of books and journals which focus on the meteoric rise and advances in the field of aviation during World War II. May 8th marks the 70th anniversary of V-E Day, or “Victory in Europe Day”. To commemorate this historic occasion, organizations including the Commemorative Air Force, Texas Flying Legends, Fagen Fighters, and the Fighter Factory are coming together for the World War II Victory Capitol Flyover.

In conjunction with this event, the National Air and Space Museum will be featuring over a dozen of the participating aircrafts on display at the Udvar-Hazy Center on May 9, 2015. Additionally, the May 2015 issue of Air and Space Magazine will serve as the official program form the Capitol Flyover. In recognition of this event, the Smithsonian Libraries is going to the stacks of the Air and Space library branch in an effort to place the rapid rise of military aviation into context.

Between the Armistice which followed World War I and the early stages of World War II, demand for military aircraft in the United States was relatively low. In addition to isolationist sentiment, the country was enduring the financial duress brought on by the Great Depression, which tightened the purse strings of the federal government. To turn a profit or simply stay afloat, U.S. aircraft manufacturers looked to selling their products overseas to countries like Britain, France, Russia, Argentina, China, the Netherlands, and Japan.[1]

In particular, sales of military aircraft to Britain and France had increased after Adolph Hitler rose to power. Though demand remained relatively low domestically, the increase in exports posed a concern—particularly if U.S. manufacturers were sending their most advanced technology and weaponry to other countries. Consequently, there was an issue of prioritizing the needs of the United States with the needs of other countries. One way this matter could be resolved was if U.S. demand for military aircraft increased. Following Germany’s invasions of Poland and France, Franklin Delano Roosevelt recognized the necessity of bolstering America’s ability to engage in aerial warfare.[2]

An Unparalleled Increase in Production

In 1938, the U.S. Army Air Corps was authorized to maintain a maximum strength of 2,230 aircraft. Realizing the increasing likelihood of military intervention in Europe and possibly the Pacific, Roosevelt indicated he would ask Congress for an increase of 10,000 to 20,000 aircraft before settling on an increase of 3,000. As if testing the political waters, Roosevelt explored means of increasing the maximum number to 10,000. While Congress eventually authorized a new maximum of 5,500 aircraft for the U.S. Army Air Corps, events unfolding in Europe gave Roosevelt the fuel needed to further increase his demands. On May 16, 1940, Roosevelt went before Congress and requested 50,000 new planes per year.[3]

Whatever hesitance or reluctance both the government and general public shared in increasing the number of military aircraft evaporated on December 6, 1941, with the bombing of Pearl Harbor. In response, Roosevelt expanded on his previous request, by calling for the construction of 60,000 new planes in 1942, 125,000 in 1943 and 110,000 in 1944.[4]

Rising to Meet the Challenge

Any attempt to meet the massive numbers Roosevelt was requesting meant changing the size, number, and structure of factories which specialized in aircraft. It also meant expanding the size of the workforce to work on the assembly lines. More challenging, it meant training both the pilots and crew members who would ultimately fly these new fighters and bombers.

For expanding the size and speed in which manufacturers could churn out military aircraft, Congress authorized the Lend-Lease Act and, later, passed the Emergency Plant Facilities (EPF) contract—both of which were designed to reduce competition between aircraft manufacturers and provide a financial means for increasing the size of factories. [5]

In an effort to develop an organized means of rapidly producing a high volume of aircrafts, the government looked to the U.S. automobile industry for assistance. As part of their contributions to the war effort, companies like General Motors and Ford built planes such as the TBF Avenger, F4F Wildcat, B-24, and the B-29. However, existing automobile factories were ill suited for building bigger and heavier aircraft which routinely underwent updates and revisions. In all, the automobile industry produced approximately 27,000 complete aircraft and over half the engines (455,522 out of 812,615) use by military aircraft.[6]

Ultimately, the stretch from 1940 to 1945 marked an unprecedented period of industrialization. During those six years, the size of factories increased by 1600%, and the United States would produce 303,000 aircrafts through an industry which, at its peak, employed 2.1 million workers.[7]

Several actions were required to address manpower shortages for both constructing and flying the significant increase of military aircraft. With 10-12 million Americans serving in the military during the peak years of World War II, there was a considerable shortage of laborers to work in the factories back home. To address the need for workers, manufacturers across the spectrum reached out to women (who would earn the nickname “Rosie the Riveters”), minorities, teenagers, and people with disabilities to help contribute to the war effort.[8]

On the other side of the manpower issue was recruiting the men and women who would ultimately fly the planes. Following Pearl Harbor, General Henry “Hap” Arnold, who had pressed for enlarging the size of Army Air Force, saw his vision realized through the Civilian Pilot Training Program (CPTP) and its successor, the War Training Service (WTS). Beyond creating new pilots, there were also training schools which developed navigators, bombardiers, and gunners and, by the end of World War II, Gen. Arnold commanded an air force of 2.3 million. Among those who fell under his command were Jackie Cochran and the members of the Women’s Auxiliary Ferrying Service (WAFS), which evolved into the Women Airforce Service Pilots (WASP).[9]

End of an Era

The beginning of the end for monoplanes was foretold with the rise of jet aircraft. Compared with first-generation jet fighters like the Messerschmitt ME 262 and the Gloster Meteor, prop fighters like the P-51 Mustang and F4U Corsair were fast becoming obsolete. Furthermore, with Allied victory in both Europe and Japan, the demand for military aircraft plummeted. Consequently, just as the U.S. aircraft industry saw its sales figures drop from over $16 billion in 1944 to $1.2 million in 1947, the size of the factory workforce fell from its peak of 2.1 million workers in 1943 to 138,700 in 1946.[10]

With the knowledge that an aging, battered fleet of aircraft would be returning home from overseas, Congress began debating the matter as early as 1942, and on February 15, 1944, passed the Surplus Property Act—leading to the creation of the Surplus War Property Administration (SWPA) which, after a series of name changes, became the War Assets Administration (WAA). In coordination with the Reconstruction Finance Corporation (RFC), the WAA was charged with the task of either storing or disposing of the massive amounts of military surplus from World War II. By June 1947, the WAA had sold approximately 30,000 aircraft for scrap and 35,000 for civilian use.[11]

Few aircraft from World War II were designated for storage and preservation. While some survive as roadside attractions, others, like the Enola Gay remain on display in museums and historic sites around the world. In light of this knowledge, the Capitol Flyover becomes all the more impressive and historic as dozens of World War II aircraft will be flying 70 years after fulfilling their missions.

For further reading on this subject: 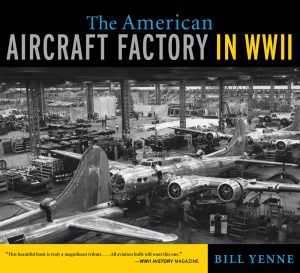