One does not readily associate “firsts” in aviation history with either Washington, D.C. or with the Scottish-born scientist and engineer Alexander Graham Bell. Alas, the first fatality in a powered aircraft connects both the nation’s capital and the inventor of the telephone. The Smithsonian’s collections give testament to many aeronautical and military milestones, including the brief but significant life of Thomas E. Selfridge.

Important inaugural events in the history of military aviation took place on the high grounds of Fort Myer, next to Arlington National Cemetery, across the Potomac River from Washington. The military base is named after Albert James Myer, a Civil War veteran who, as a Brigadier General, commanded the then-named Fort Whipple. Here, General Myer established the first Signal School of Instruction for Army and Navy Officers in 1869 (for the dissemination of military information) as well as the National Weather Service in 1870.

In 1887, a new commanding general, Philip H. Sheridan, developed the nation’s cavalry to a great extent at Fort Myer. Army horsemanship came to play an important role in Washington’s official rituals and, most prominently, taking part in the solemn burial ceremonies at Arlington National Cemetery. But communications and innovative technologies also remained an important function here. A radio telegraphy station with the call sign NAA established operations at Fort Myer in 1913. In 1915, the first trans-Atlantic voice communication occurred between “The Three Sisters” (built by the Navy, the three huge towers were known in Arlington, Virginia as the “Radio”) and the Eiffel Tower in Paris, France; at that time, they were the tallest structures in the world. The country set its clocks by the radio signal and listened to its weather reports. Eventually, as the flight approach to National Airport became busier, the radio towers posed a hazard to aircraft and were moved to the United States Naval Academy in Annapolis, Maryland.

Long before the creation of Hoover Airfield and its successor, National Airport (now Reagan National), notable aviation milestones occurred at Fort Myer. The first test flights for the U.S. military took place here on the Fort’s parade ground, beginning on September 3, 1908. Orville Wright was attempting to persuade the Army to fund his airplane (Wilbur was in France for the same purpose with the military there). Two weeks later on September 17th, following several flights with Wright piloting, the plane crashed after four minutes, mortally injuring passenger Lieutenant Thomas Etholen Selfridge (1882-1908). When he subsequently died of head wounds later that day he became aviation’s first fatality. Wright suffered several broken bones. There are horrifying photographs of the accident and its aftermath in the National Air & Space Museum’s Archives (link to the collection here). The Lieutenant, only 26 years old when he died, was buried not far from the site of the accident, in Section 3 of Arlington National Cemetery. A nearby gate is named in his honor.

Thomas Selfridge, a 1903 graduate of West Point (along with Douglas MacArthur), was a remarkable man with many accomplishments as a flight pioneer during his short life. Selfridge was one of only three in the military at that time trained to pilot a dirigible. He was the first in the U.S. military to fly solo in a heavier-than-air plane. The Smithsonian houses artifacts and records associated with the Lieutenant to remind us of how he lived rather than how he died, a macabre if fascinating marker in aviation history.

It was Selfridge’s close relationship with Alexander Graham Bell (1847-1922) that brings him back to memory. A longtime resident of Washington, the inventor served on the Smithsonian’s Board of Regents and donated funds for the establishment of its Astrophysical Observatory.

Following Bell’s request to President Theodore Roosevelt, Selfridge, assigned to the Aeronautical Division of the U.S. Army Signal Corps, became a member of the inventor’s Aerial Experiment Association (AEA). Because of this connection, Selfridge was the first in the U.S. military to fly an airplane, the White Wing (May 19, 1908). The Lieutenant had taken his first flight on the Bell-designed Cygnet, essentially a big unpowered kite, towed by a boat, near Baddeck, Bell’s summer home (Beinn Bhreagh) in Nova Scotia. After seven minutes aloft it coasted into the cold waters of Bras d’Or but it was Bell’s group’s first success flying a manned aircraft—something his close friend, astrophysicist and third Secretary of the Smithsonian Samuel Pierpont Langley, tried but failed to accomplish when Langley’s machine, the Great Aerodrome, crashed into the Potomac River.

The Bell vacation home, boatyard, and laboratory in Cape Breton, Nova Scotia (the home and cottages of the estate are still maintained privately by Bell descendants) was remote. The eager young Lieutenant Selfridge, stationed at West Point as an Instructor in Ordnance and Gunnery, wrote to the Bells at their Washington home accepting their invitation to Beinn Bhreagh and politely inquiring if he should bring along a dinner jacket. The touching letter (preserved in the Library of Congress along with the Bell Family papers) is dated 1907; just one year earlier, Selfridge was at the Presidio when the devastating earthquake demolished San Francisco. His unit did search and rescue in the ruins of his native city.

Selfridge, working with the Aerial Experiment Association, designed a biplane, the Red Wing. Another member of the group managed to keep the plane aloft over ice in New York at about 300 feet for a short flight. The National Air and Space’s rare book collection in the Ramsey Room has thirty-nine typescript issues of the Bulletins of the Aerial Experiment Association, consisting mostly of the correspondence and reports between members of this small, select group, formed at the urging of Bell’s remarkable wife Mabel (and with her considerable financial support).

The Aerial Experiment Association that consisted of Bell, Selfridge, Glenn Hammond Curtiss, F.W. Baldwin, and John Alexander Douglas McCurdy. Selfridge served as AEA’s secretary. Also in the Air & Space Museum’s collections is the Curtiss E-4, In-Line 4 Engine (1908), its wooden propeller designed by Lt. Selfridge. And, grimly, there is a fragment of the propeller, said to be from the fatal 1908 Wright Military Flyer. The damaged propeller itself is now in the National Museum of the United States Air Force in Dayton, Ohio.

Selfridge’s personal copy of Secretary Langley’s book, The internal work of the wind (Washington, Smithsonian Institution, 1893) is housed in the Ramsey Room. This publication is a study of wind velocity and aerodynamics by a great believer in the future of manned flight. Poignantly, it bears Selfridge’s signature. Though young, he was one of the very few at the time who accurately foresaw a military role for powered aircraft. The book bears the label: “Presented by the family of Lieutenant T.E. Selfridge, Aero Club of America.”

Philip D. Edwards and Chris Cottrill of the National Air and Space Museum Library helped with this post.

For more on “The Three Sisters” (including a wonderful photograph) see the Arlington County Public Libraries post (link here).

Military Use of the Airplane. On 2 August 1909 the US Army Signal Corps secured the Wright (or Military) Flyer from the Wright Brothers for $30,000.00.

Carl Henry Claudy’s photographs of the Wright Brothers’ Fort Myer flight trials were donated to the Smithsonian at the urging of Paul Edward Garber (1899-1992), who, as a young boy, carried the photographer’s box of negatives during those September days. Garber was the first head of the Smithsonian’s National Art Museum. In this letter of 1909, Bell planned to donate his Claudy photographs to the Smithsonian.

The National Air and Space Museum has Glenn Hammond Curtiss’ own typewritten copy of the Bulletins of the Aerial Experiment Association (Baddeck, Nova Scotia, 1908-1909).

The post merged in 2005 with nearby Marine Corps base, Henderson Hall, and is now known formally as Joint Base Myer-Henderson Hall. 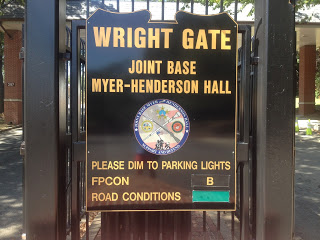