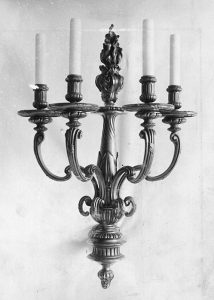 For Chicago natives and Art Deco enthusiasts Jackie Vossler and Joe Loundy, supporting two new design internships at the Smithsonian Libraries was a no-brainer. Jackie, a self-described bibliophile and member of Chicago’s Caxton Club, has been acquainted with the Libraries for three years. Along with Joe, she was intrigued by Art Deco treasures found in our trade literature collection, most notably the Edward F. Caldwell & Co. collection, a visually stunning repository of more than 50,000 photographs and original design drawings of lighting fixtures that the company produced from the late 19th to the mid-20th centuries (supplied to notable clients such as the Rockefellers, the Carnegies, and the Roosevelts).

Thanks to Jackie and Joe’s support, in the summer of 2016, the Libraries is hosting the following internships: Art Deco Lighting Research and Art Deco Trade Literature Research. Art Deco Lighting Research uncovers the diverse Art Deco patterns that Caldwell created for commercial, public, and residential uses with a focus on major commissions in Chicago. Art Deco Trade Literature Research assesses the trade literature and world’s fairs collections (buildings, ornamentation, fashion, and other areas of American life) and identify materials in both collections that address the Art Deco period in Chicago. Jackie and Joe’s ultimate goal for the internships is access: to create an organized catalog of materials that is searchable online by design motif. 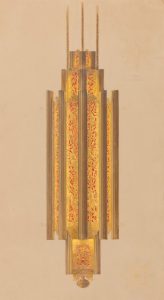 Art Deco began its ascendance as a style in France before World War I. By the 1920s it had spread overseas and dominated the style world until going out of fashion at the outbreak of World War II. Art Deco became engrained in the social and commercial habits of Americans from the 1920s to the late 1930s. The style is expressed by bold colors, stylized geometric shapes, linear symmetry, sleek machinery, and opulent decoration. Art Deco designs appeared everywhere, from flashy skyscrapers (The Empire State Building) to appliances, furniture to fashion, product designs to architecture, jewelry to automobiles. Art Deco even accomplished the impossible task of breaking into Hollywood: Ginger Rogers/Fred Astaire films were performed among a luxe display of Art Deco hotels and cruise liners. At the pinnacle of its popularity, Art Deco represented glamour, sophistication, nationalism, and confidence in technological advancement.

Says Joe, “The Art Deco movement was uplifting and optimistic in times of grave American despair, such as the stock market crash of 1929 and the Great Depression.” Adds Jackie, “While the movement was exclusive and expensive in France, in the United States it infused areas of everyday life through text, colors, and graphic designs on packaging and products entering the home, and became part of the fabric of everyone’s lives. Americans connected to it, and thus it became part of the American story.”

Both Jackie and Joe are active members of the Chicago Art Deco Society, or CADS; Joe is the President Emeritus of the Society. CADS focuses on preservation and education, including the conservation of the historic Chicago Motor Club, which had fallen into disrepair and was shuttered. In 2012, CADS filed a Suggestion for Landmark Status, leading to the building’s recognition as a Chicago landmark, and in 2015, the newly-renovated building opened as a Hampton Inn, a great success for the building getting a new lease on life. CADS is also working on a book, Art Deco Chicago: The Making of Modern American Culture, which will include architecture, decorative arts, fine arts, and commercial/industrial uses of the style, exploring the role Chicago played in contributing to Art Deco in the United States. 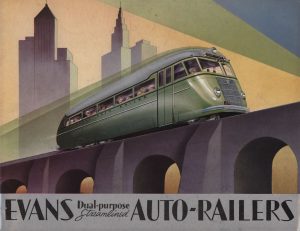 It was through their combined interests of Art Deco and libraries that Jackie and Joe proposed the idea for the internships. “We see these internships as a great opportunity and value,” says Jackie. “We are thrilled to invest in qualified, skilled students, and make authentic Art Deco material accessible to all.” Notes Joe, “We hope this project inspires Art Deco groups and groups of other disciplines as well. We’d love for people replicate the projects by contacting their local libraries, museums, and archives and creating opportunities to make fascinating historical information more accessible within communities.”

Categories:Advancement and Development Art and Design Intern and Volunteer Updates