Last February we welcomed Smithsonian Secretary David J. Skorton to the Joseph F. Cullman 3rd Library in the National Museum of Natural History. On behalf of his wife Dr. Robin Davisson and himself, the Secretary was on a mission to select books for conservation as part of the Libraries’ Adopt-a-Book Program. Lilla Vekerdy, head of special collections, and Leslie Overstreet, curator of natural history rare books, displayed special treasures dating back to the 16th century from our collection. While we may have enticed him with too many selections, the Secretary ultimately chose three books: 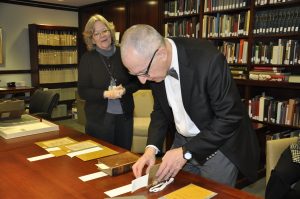 Many historic items in the Smithsonian Libraries rare book collection are becoming too brittle to handle and paper degradation means content is slipping away. One-third of our items require conservation if they are to remain available to future researchers. Our team of book conservators stabilizes and preserves our books, maintaining accessibility and preserving them for future generations. Adoptions and other gifts to the Smithsonian Libraries’ preservation department enable our experts to use the latest techniques to conserve, restore, and digitize these irreplaceable records.

Many thanks to Dr. Robin Davisson and the Secretary for investing in our Adopt-a-Book Program!

All book adopters receive a bookplate added in their name to the book as well as a virtual bookplate in our online catalog. More information about the Libraries’ Adopt-a-Book Program.