It was James and Vera’s maternal great-grandmother, Flora Edna Wilcox, who bequeathed the four items to her granddaughter, Hannah Hester Brown Cerruti, the siblings’ mother. Flora Edna Wilcox could trace her family back to five founders of Hartford, Connecticut (documented in Original Distribution of the Lands of Hartford among the Settlers, 1639). Though Native Americans and Dutch traders had taken up residence where the Connecticut and Park rivers meet, it wasn’t until the 1630s that Reverend Thomas Hooker, impassioned Puritan, created a settlement in the area and Hartford was officially founded in 1636. Hooker was joined by other Puritans not happy with how the Massachusetts Bay Colony was run. Included with those who left Newtown, Massachusetts (now Cambridge) were the Wilcox family, of whom Flora was a direct descendent. Hooker’s “Fundamental Orders of Connecticut,” the basic law of the Connecticut colony from 1639 to 1662, has a special place in American history—it was in this charter that the idea of a government answerable to the people was first claimed. Its principles would live on in the United States Constitution drafted over a century later and garner Connecticut’s nickname: The Constitution State. 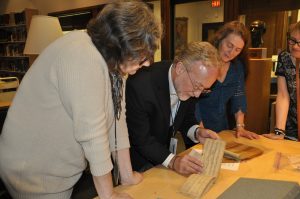 Through the marriage of Asa Wilcox to Lois Bishop in 1788, the Wilcox family became joined to another family which had similarly come to America in the 1630s, in the form of Lois’s great-great grandfather James Bishop Sr., later Lieutenant Governor of the unified Connecticut colonies. Lois Bishop’s younger brother Uri, born in 1781, was a fifer in the War of 1812, and his Military Music book includes titles such as “Soldiers Joy,” “Irish Widow,” “Doublings of the Troop,” and “The Drummers Call.” These songs are short riffs that a fifer would be playing while marching. Inscribed on the cover of the Military Music are handwritten notes by descendent Reverend James Bishop Wilcox (1796-1886): “Where is the boy since 1776 that could not whistle Yankee Doodle,” Wilcox wrote. “A specimen of military music 80 or 90 years ago. These were the tunes that stirred up the patriotism in the bosom of our fathers…”

James Bishop (born 1744) was the father of Lois and Uri Bishop. His Gamut, an ancestral leather-bound manuscript from 1766, contains music scales, musical characters, and lessons for tuning the voice. Pieces of music contained, many religious in nature, include “St. Paul’s Tune,” “Old Hundred Psalm Tune,” and “The Angels Song.” 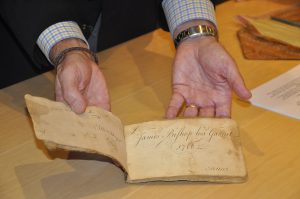 Jonathan Edwards’ Treatise on Religious Affections and Sermons on Various Important Subjects come from Hannah Hopkins Hodge, James and Vera’s great-great-grandmother. The Hopkinses were another founding family of Hartford and followers of Hooker. Hodge was married to Reverend James Bishop Wilcox in 1828, and inherited the sermons from her maternal grandfather Timothy Hopkins, the son of Reverend Samuel Hopkins and Esther Edwards (married 1727), sister of Jonathan Edwards. Jonathan Edwards was a revivalist preacher, philosopher, and Congregationalist Protestant theologian. He is widely regarded as “one of America’s most important and original philosophical theologians”; though his work was broad in scope, he was rooted in Reformed theology, the metaphysics of theological determinism, and the Puritan heritage. Edwards played a critical role in shaping the First Great Awakening, and oversaw some of the first revivals in 1733-35 in his church in Northampton, Massachusetts. 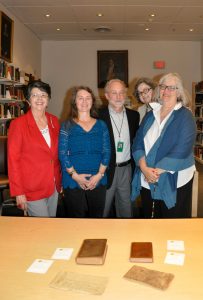 Says Vera, “We’re honored that our materials are valued by the Smithsonian, which I consider the ‘master of American history.’ For the nation’s museum and keeper of our heritage, smaller items like these help weave a more complete fabric to the collections, together creating the bigger picture of the American story.”

“I have such pride that these artifacts of our family history will now reside with other pieces of our nation’s history at the Smithsonian,” says James. “It is wonderful to know that they will now be preserved, shared, and studied, and I can’t think of a better place for them to be housed than at the Smithsonian Libraries.”

He continues, “The Smithsonian Libraries is a national treasure, a source of knowledge and a leading repository of the historical evidence of the human experience. The Libraries is the backbone essential to the Smithsonian’s ability to complete its mission. It was a true honor to serve on the Libraries’ Board for three years, and yet another to be able now to make such a material and long-lasting contribution to the Dibner Library.”

Although the Dibner Library specializes in the history of science and technology, it has a noteworthy section of books on the history of the United States. Situated in the National Museum of American History, the library’s collection provides valuable resources for curators and researchers in their exhibition work and scholarship. The significant donation by James L. Cerruti and Vera V. Magruder already has been enthusiastically scrutinized by one of the curators of an upcoming exhibition on the development on American culture, opening in 2018 in the National Museum of American History.