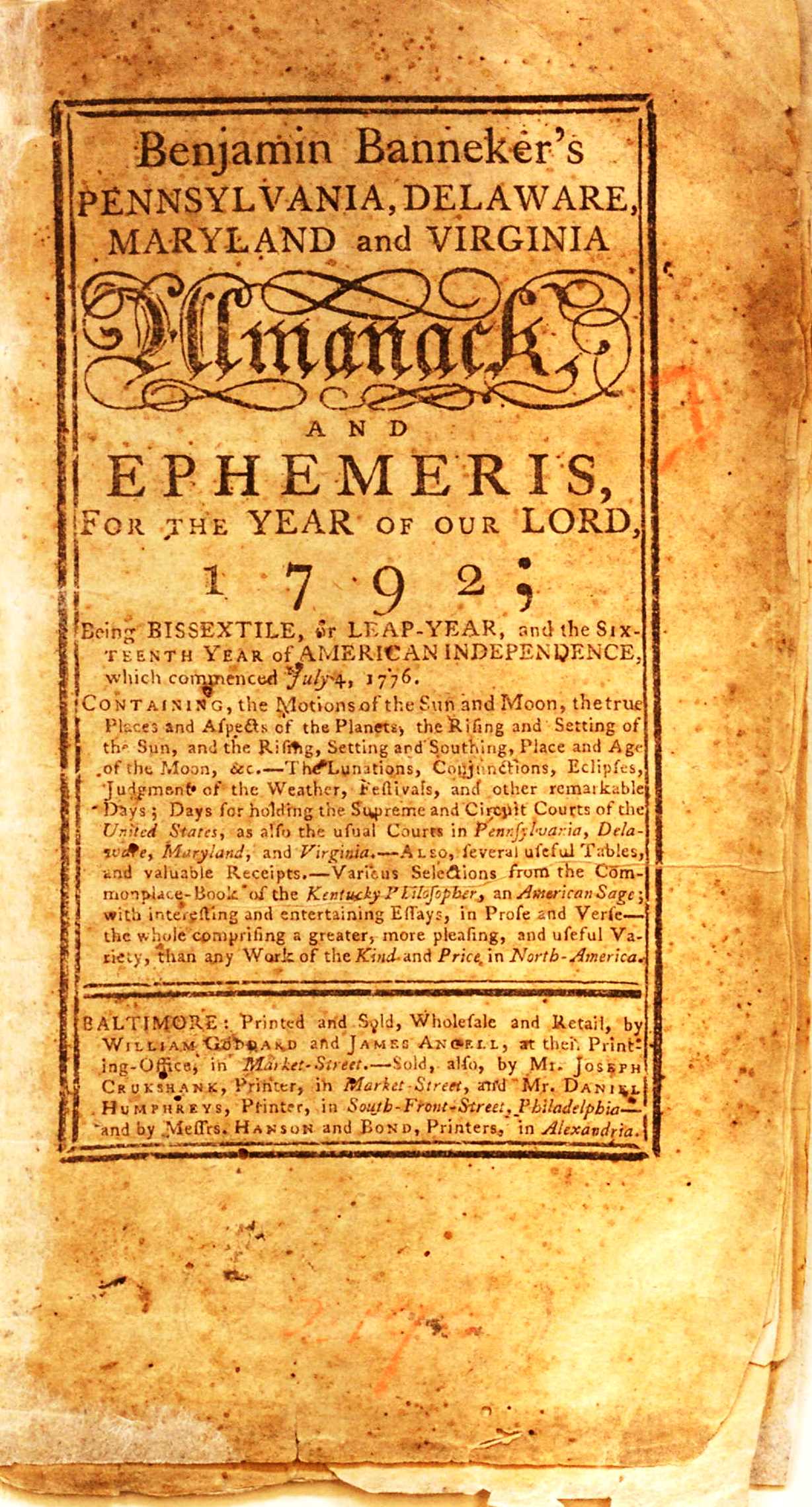 Less well-documented is another remarkable African American, Benjamin Banneker (1731-1806), who almost a century earlier helped with the planning and mapping of the Federal District.

The territory of the District of Columbia, as the nation’s new capital, was laid out beginning in 1791 as a square with each side ten miles long, the quadrants formed by axes of the corners running north-south and east-west. Assisting Major Andrew Ellicott and working out of the field observation tent, Banneker spent nights lying on his back recording astronomical observations. He also reportedly maintained a clock that was used to determine surveying way points by the position of the stars (having the experience of building a timepiece entirely out of wood as a young man). But nearing sixty and in poor health, Banneker’s contributions to the survey were limited to a few months; still his efforts laid the groundwork for the difficult and sometimes contentious two-year project.

Benjamin Banneker was free-born in Baltimore Country, Maryland. Like Frederick Douglass, Banneker had little formal education and was largely self-taught. Banneker was aided by the Quakers, including members of the neighboring Ellicott family, in his intellectual pursuits. He farmed the property inherited from his parents, where he computed the cycle of seventeen-year cicadas and wrote a treatise on bees in his journal. He was clearly a singular man. However, much myth and anecdote surround the life and work of Banneker. An uncertain legacy grew, in part, from the destruction of almost all his papers and possessions when his log cabin home burnt down at the moment he was being buried.

It was the Smithsonian’s Silvio A. Bedini who began to carefully and thoroughly research the historical record of Banneker. Bedini was first a curator, later Deputy Director of the National Museum of History and Technology (now the National Museum of American History). He then became Keeper of Rare Books of the Smithsonian’s Dibner Library until retiring in 1987. Relatively early works that deeply investigated the contributions of African Americans to the country’s history and culture were Bedini’s The Life of Benjamin Banneker (1971), Benjamin Banneker and the Survey of the District of Columbia, 1791 (1971), and The Life of Benjamin Banneker: The Definitive Biography of the First Black Man of Science (1972; revised in 1999).

There are two pieces of ephemera in the Smithsonian collections which firmly record the accomplishments of the remarkable Banneker. They are rare printed almanacs, annual publications once found in most households. They provided information essential for day-to-day living and working in a given year. By their nature, like newspapers, almanacs were ephemeral material, pamphlets printed cheaply (with crude type and poor-quality paper), not firmly bound but stab-sewn. They were usually well-thumbed and not kept long by their owners. The calendar of days would provide astronomical and meteorological data (sun and moon rises, eclipses, tide-tables, forecasts). Banneker taught himself how to calculate an ephemeris—the positions of a star or planet at regular intervals throughout a given period—to publish his own almanacs for the years 1792 through 1797. There are at least 28 separate editions of his almanacs produced by a variety of printers and publishers in cities from Philadelphia, Pennsylvania; Wilmington, Delaware; Baltimore, Maryland; and Alexandria, Petersburg and Richmond, all in Virginia. 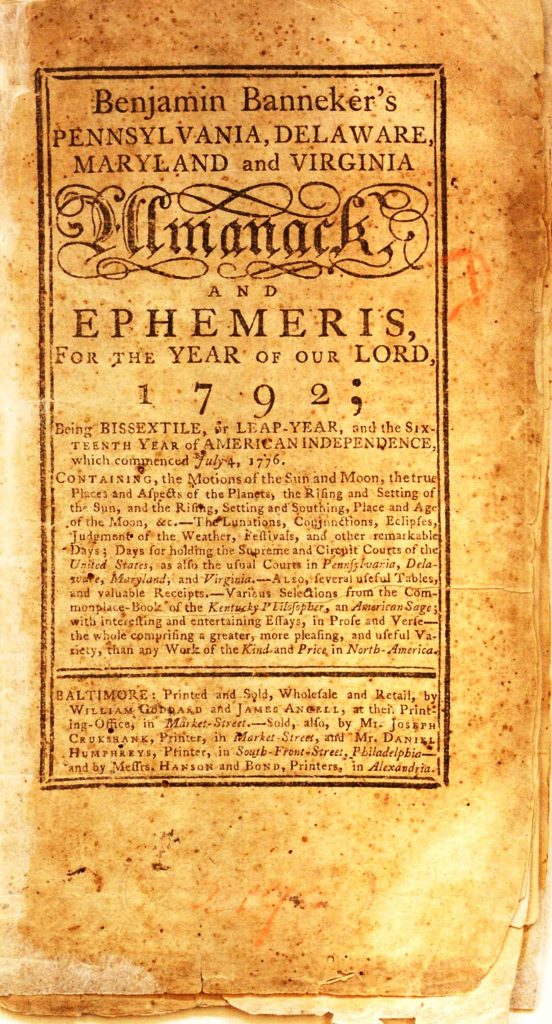 The Smithsonian Libraries Dibner Library preserves Banneker’s first, titled Pennsylvania, Delaware, Maryland and Virginia Almanac and Ephemeris for the Year of our Lord 1792 (Baltimore, Printed and sold by William Goddard and James Angell, 1791). Almanacs often contained additional helpful information such as interest rates, distances between towns, feast days, recipes for medicines and food, as well as Biblical quotes, moral lessons, fables, poetry, and ribald humor. This material was sometimes supplied by the printer just for filler and entertainment. Banneker’s works were promoted by abolitionist societies and are notable for his political selections, commentaries and anti-slavery sentiment. The almanac for the year 1792 published an extract from the Columbian Magazine, “On Negro Slavery, and the Slave Trade.” It also contains a long endorsement from the Maryland Senator and third U.S. Secretary of War, James McHenry. 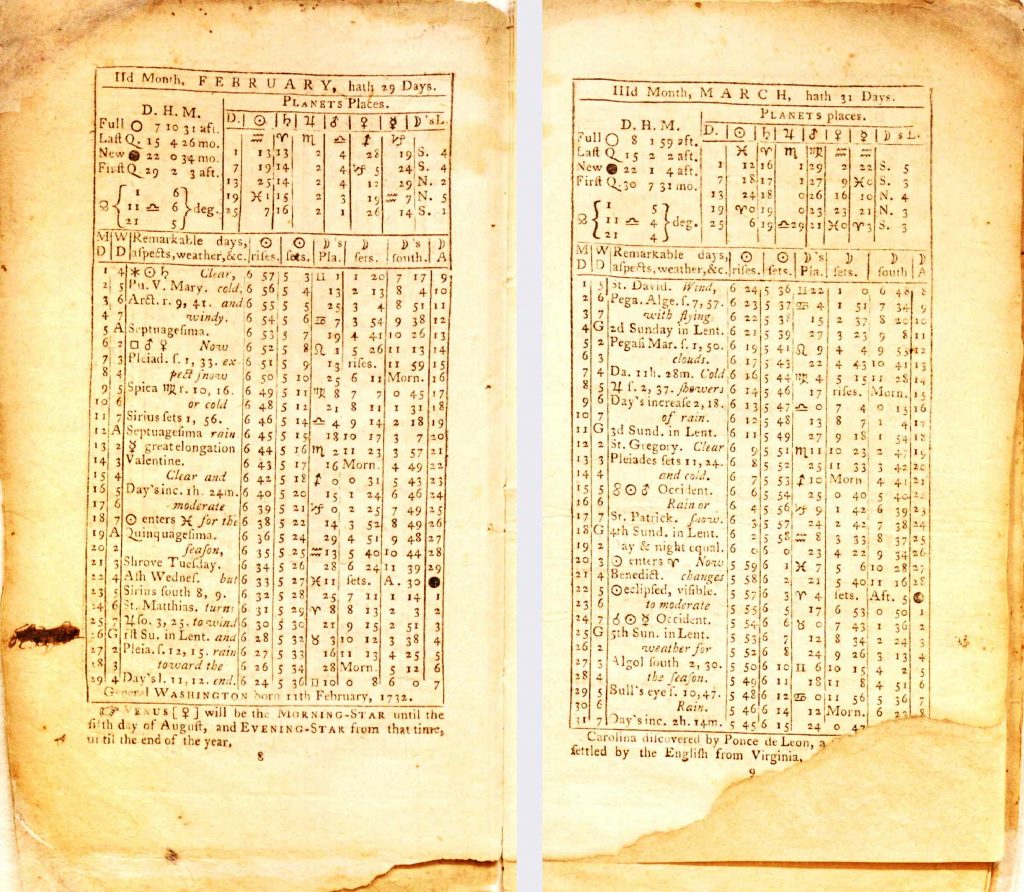 In addition, Banneker’s Almanack and Ephemeris for the Year of Our Lord, 1793 (printed by Joseph Krukshank in Philadelphia, 1792) is in the collection of the Smithsonian’s National Museum of African American History and Culture and now on exhibition. This work has been digitized and can easily be read in its entirely from the Smithsonian Transcription Center (link here). Alternating with the pages of charts are texts of “A Plan of a Peace-Office, for the United States,” and “from the debates in the last session of the British Parliament … abstract from the speech of William Pitt, esq. on the motion for the Abolition of the Slave-Trade.” There is also an “Extract from Jefferson’s Notes on Virginia.” Banneker sent Thomas Jefferson a manuscript copy of his first ephemeris along with a letter politely challenging the then-Secretary of State on his views about the intellectual capabilities of African Americans and racial inequality. Jefferson responded and the exchange of letters was published separately in Philadelphia, printed and sold by Daniel Lawrence, in 1792.

Douglass, in an 1865 address at the opening of the Douglass Institute in Baltimore, observed:

It is the misfortune of our class that it fails to derive due advantage from the achievements of its individual members, but never fails to suffer from the ignorance or crimes of single individual with whom the class is identified. A Benjamin Franklin could redeem, in the eyes of scientific Europe, the mental mediocrity of our young white Republic, but the genius and learning of a Benjamin Banneker of your own State of Maryland, the wisdom and heroism of Toussaint, are not permitted to do the same service for the colored race to which they belong.

The Smithsonian Libraries commemorate Black History Month by featuring this important artifact of Banneker’s in its collections and continually preserving, providing access to and facilitating the investigation of the historical record.  From the editors of the 1796 edition of Banneker’s almanac:

Not you ye proud, impute to these the blame
If Afric’s sons to genius are unknown,
For Banneker has prov’d they may acquire a name
As bright, as lasting, as your own.

No known contemporary portrait of Benjamin Banneker exists. The frequently reproduced woodcut, of a relatively young man in Quaker garb, published in his last almanacs was likely a stock image. Frederick Douglass, on the other hand, was the most photographed American of the 19th century.

The American Antiquarian Society has the greatest collection of almanacs printed in this country. They also have an extraordinary manuscript, donated by the printer William Goddard, of Banneker’s first almanac, written in his own hand. The Maryland Historical Society has additional manuscript material of Banneker. Their collections greatly aided Bedini in his research.

Jefferson’s response to Banneker can be found here.

Banneker Park in Washington, D.C. is on a direct axis with the Smithsonian’s Castle. Across the Potomac River, Arlington County also commemorates Banneker with a park. This site contains one of the original stone boundary markers used in the survey.