Myrtle: The Provenance and Meaning of a Plant 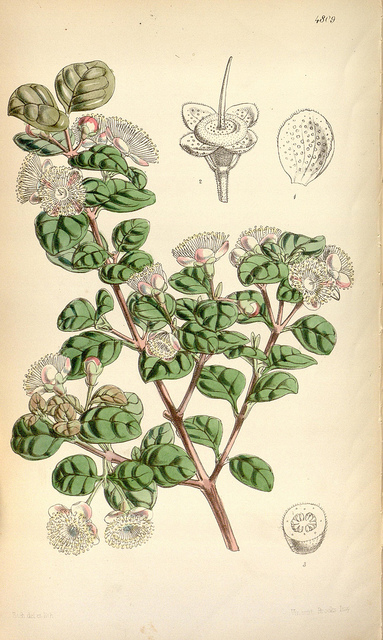 A version of this post first appeared on the Biodiversity Heritage Library blog.

Provenance can be defined as the chain of ownership of any type of object from its creation to the present day. Co-organized by the Smithsonian Libraries, the Smithsonian’s Material Culture Forum recently held a lively session of presentations and discussions on this topic, with speakers from across the Institution: the National Zoo; Natural History Museum scientists and researchers in anthropology and paleobiology; archivists of World War II-era material; and curators from the National Museum of American History, the National Air & Space Museum, and the National Museum of African American History and Culture. There were many other subject specialists (such as a horticulturist) who could have participated, given time and world enough, as ownership history is a crucial matter and a commonality in the work of Smithsonian staff. Issues and questions about the history of a collection, transfer of possession, and unlawful appropriation can be applied to a living object (for example, the golden lion tamarin) as well as works of art or rare books.

The provenance of a botanical specimen was recently presented to a world-wide audience, even if they did not quite realize it. One detail of the Royal wedding of Prince Harry and Meghan Markle had commentators confidently offering up the history of the sprig of myrtle used in the bride’s bouquet. This was commonly reported to be from the plant nurtured from the flower used in the marriage ceremony of Queen Victoria and Prince Albert. Every bride in Royal nuptials after Victoria carried on the ritual. If not quite true, it made for a nice, simplified story line.

The tidbit no doubt had some wondering just what myrtle is. In this present age, it is not a common wedding flower nor used much for culinary or medicinal purposes. Some may know myrtle as potted topiary, from its many references in poetry, or as the name of a character in literature—The Great Gatsby or Harry Potter, for instance.

Myrtus communis (true myrtle), of the family Myrtaceae, is a fragrant, evergreen shrub with small, glossy green leaves and white, star-shaped flowers with long stamens, and, after their blooming, purple-black berries. It is native to Mediterranean Europe, North Africa, the Middle East, and Turkey. In these temperate climates it is sometimes clipped as a hedge. As a container plant of topiary, it is often trimmed to look like a fuzzy bowling ball balancing on top of a long stem or a pyramid, and is brought inside in cooler weather.

Queen Victoria and Prince Albert of Saxe-Coburg and Gotha were married in 1840. The only flowers adorning her during the ceremony were orange blossoms. In 1843, Princess Augusta of Cambridge (cousin to Victoria), in her wedding to Prince Frederick, Grand Duke of Mecklenburgh-Strelitz, was decorated all over with myrtle: on her dress, train, head-dress, and bouquet. The Court Circular for this ceremony reported that myrtle was “the emblematic flower of Germany.” And a nosegay of myrtle was presented to the Queen in 1845 in Gotha, Germany by her husband’s grandmother. The British Royal tradition of brides carrying myrtle was firmly established when the Queen’s eldest daughter (also named Victoria) married in 1858. The Princess Royal was decked out with so many flounces of myrtle and orange blossoms on her gown that she appeared to be a tiered wedding cake. Queen Victoria commanded that every bride of the Royal family should have myrtle planted at her Osborne House to commemorate each wedding.

Myrtle thrived at Osborne House, Victoria and Albert’s beloved country retreat on the Isle of Wight. Long abandoned as a Royal residence (Victoria’s many offspring were not so enamored by the place) and subsequently used as a nursing home and naval college, the home and its 170-year old gardens have been recently restored by English Heritage. There is myrtle growing there today, from descendants of Victoria’s planting.

Myrtle roots easily, and there are probably others of prominent lineage growing in many of the Royal gardens, greenhouses, and orangeries. Apparently, the sprigs in the most recent Royal bouquet either came from the myrtle planted for Queen Elizabeth II in 1947 or the “original” at Osborne House. The myrtle in Camilla Parker Bowles’s wedding bouquet came from Cornwall (Charles, Prince of Wales, is the Duke of Cornwall and Camilla is now Duchess).

What was not as frequently reported about the tradition of the wedding bouquet in the lead-up to the Royal wedding in May, was the ancient history and symbolism of myrtle. Queen Victoria was well-versed in the language of flowers; the interest in floriography was at its peak in England during her reign. Blooms of various flowers were arranged in bouquets, nosegays, and tussie-mussies, a way of conveying a message, sometimes discreetly if need be. Queen Victoria’s presentation to her daughter, the Princess Royal, and, later, to her several other daughters, daughters-in-law, and granddaughters on their wedding days was not incidental. Victoria was both continuing and transforming the long traditions associated with myrtle.

There are many references to myrtle in ancient mythology and the Bible. The Greeks and Romans knew the plant as Myrtos and Myrtus and it was closely associated with the goddesses Demeter and Aphrodite. Venus is described by Ovid as emerging from the sea on her half-shell holding a sprig of myrtle. The wonderfully scented plant was considered an aphrodisiac, known to appear in wedding crowns for either the bride or the groom. In the Greco-Roman world, myrtle in laurels or crowns were sometimes presented to poets and woven into garlands of honor for athletic prizes, and was also worn to sacrifices and banquets. As opposed to laurel wreaths, myrtle signified victory from a bloodless battle. Myrtle wreaths made of gold have been excavated around the ancient world, particularly in Macedonia. Neat of appearance and amendable to clipping, myrtle was a common feature of gardens.

The ancient plant had a great ceremonial role in other civilizations. In Judaism, myrtle is known as Hadassah, as one of four sacred plants in the Feast of the Tabernacles, or, Sukkat, in 445 B.C. The Targum Sheni to Esther (2.7) states that “she was called Hadassah (Myrtle) because the righteous are compared to myrtle … As the myrtle spreads fragrance in the world, so did she spread good works.” Myrtle represents the community, thought of as a symbol of peace and of Eden and of marriage. In Christianity, losing its Greco-Roman association with female sexuality, myrtle came to be an emblematic symbol of the purity of the Virgin Mary.

As an ornament for brides, this tradition eventually made its way to Germany, an old custom that Queen Victoria adopted as her own. Publications of her era or earlier, such as Henry Philips’ Floral Emblems (1825), Charlotte de La Tour and Frederic Shoberl’s The Language of Flowers, with Illustrative Poetry (1839), Flora Symbolica, or, the Language and Sentiment of Flowers (1866), and Richard Folkard’s Plant Lore, Legends, and Lyrics (1884), well describe the significance of myrtle (the Smithsonian’s Botany and Horticulture Library holds many titles on the “Language of Flowers,” that is, blooms’ symbolism or sentiment). The plant has many, layered meanings—youth, virginity (before marriage), fertility, innocence, immortality, fidelity—but, above all, love.

Queen Victoria did not introduce the myrtle plant to England from her visit to Germany. Tradition has Sir Walter Raleigh bringing it back from Spain in 1585, but it may well have been imported earlier. The Islamic gardens of the Iberian Peninsula featured myrtle since the Middle Ages. Unlike the Isle of Wight myrtle, the Alhambra and its Generalife Palace in Granada, Spain still have specimens that are hundreds of years old. John Gerard in his herbal of 1597 identifies six varieties grown in southern England. In the 17th and 18th centuries myrtle was a fashionable potted plant of the aristocracy, brought into the orangery when not adorning a garden. John Parkinson, in his Paradisi in Sole Paradisus Terrestris, or, A Garden of All Sorts of Pleasant Flowers wrote of “mirtle”: “Wee nourse [nourish] them with great care for the beautifull aspect, sweete sent and raritie, as delights and ornaments for a garden of pleasure, wherein nothing should be wanting that art, care and cost might produce and preserve.”

Myrtle has thrived on a sheltered terrace of Osborne House on the Isle of Wight in the English Channel, overlooking the Solent, a seaside view that reminded Prince Albert of the Bay of Naples. Here, he was free to prove his gardening, architectural design, and landscaping abilities by supervising the building of an Italian-style palazzo and its grounds. On 17 September 1846 Victoria wrote in her journal, “… Albert supervised the transplanting of all the … myrtles … which is a tremendous job; one myrtle required 15 men to move it!” The home was their own creation and a retreat from the stiffness and oppressiveness of the court.

Victoria’s family spent July and August on the Isle of Wight when the myrtle was in bloom. The sprigs planted from successive bridal bouquets signal a continuity that many find reassuring, as attested by news reports to this day. A separate structure at Osborne House, Swiss Cottage, provided the Royal children an area where they were encouraged to learn gardening. For her granddaughter’s wedding, 18 February 1878, Victoria recorded that she “Walked … to the Swiss Cottage & planted a myrtle bush in honour of the day … grown from a sprig of myrtle in Vicky’s wedding bouquet, 20 years ago, of which I have sent a piece for Charlotte’s wedding nosegay.”

Queen Victoria was to see many more plantings of myrtle. She died at Osborne House on 22 January 1901. The provenance and significance of myrtle continues on into the 21st century, at least for British Royalty, as we saw with the bouquet that Meghan Markle carried.

For more on bouquets and the language of flowers (link); from Smithsonian Gardens.