Art Deco at the World’s Expositions

This is the third in a series of posts about the Art Deco resources at the Cooper Hewitt, Smithsonian Design Museum library. Each post will highlight primary resources which contain the styles and designs of the Art Deco era. These resources are divided into seven categories- world’s fair publications, interior and architecture books, trade catalogs, graphic design, pattern books, and picture files. This guide is not an exhaustive summary and these featured resources are just a portion of what awaits Art Deco enthusiasts and researchers in the Cooper Hewitt library collection. We are grateful to Jacqueline Vossler and Joseph Loundy for their generous support of this project.

At the 1925 Paris Expo, Art Deco debuted on the international stage. The architecture and interiors in the pavilions were of the newest, most luxurious style, and the design that filled them sent ripples throughout the world. The subsequent world’s fairs highlighted global participation during the years that defined this style, mapping where the style spread and tracked how it evolved.

The Cooper Hewitt, Smithsonian Design Museum library holds several titles relating to World’s Fair events starting with the 1851 exposition in London. Following the fashionable 1925 Paris Expo, other nations hosted events that took the style beyond the streets of Paris through the lenses of the industrial, technological, and geopolitical powers held within each country. Following the 1925 Paris fair, the Art Deco was prominent in the 1933 Chicago fair, 1937 Paris fair, and the 1939 New York fair. In addition to these large fairs, smaller extensions of the style appeared in other fairs in between helping to expand the mass appeal and environments where Art Deco style was adopted and developed. Please enjoy these highlights and explore how this collection of World’s Fair ephemera traces the Art Deco style across nearly two decades and around the world.

The Paris 1925 Exposition Internationale des Arts Décoratifs et Industriels Modernes (Modern Decorative and Industrial Arts International Exposition) was devoted to design that was original and modern. As the first entirely modern international exhibition, it redefined exhibition strategies and, thus, consumer culture at large. By presenting decorative art and design submissions in ensembles, designers demonstrated to visitors their objects intended use. Within this framework, the exposition re-establish France as the world’s tastemaker and center for luxury goods.

The Cooper Hewitt’s collection is full of examples of these ensembles and the pervasive Art Deco style at the 1925 exposition. Perhaps the most icon of this innovative Art Deco style was the French Embassy, assembled by the Société des Artistes Decorateurs (SAD). SAD acted as key organizers in the exposition, even during the delay because of the first World War. Une ambassade française offers colored sketches of different room designs as well as black and white photographs of the realized spaces.

A diverse perspective of the fair is present through these resources. While most of the publications are in French, illustrations and photographs offer insight into aspects of the exposition like the architecture and design. Many feature the pavilions found in Paris, whose architecture acts as a blueprint for future Art Deco designs.

The Cooper Hewitt’s resources, across all fairs, reveal individual objects, as seen in Henri Rapin’s volume mentioned in the introduction post for this series, as well as guides for the fair and host city. Additional publications include catalogs and several general and commissioners’ reports, several of which go into detail concerning modern design and the decorative arts.

Chicago’s 1933 Century of Progress exposition celebrated the city’s development since its founding in 1833. With the world in the depths of the Great Depression, many exhibitors could not afford to make an appearance. Therefore, fair organizers secured the support of the National Research Council to make this the first international exhibition devoted to Science. In the spirit of technology, the exhibition officially opened when sensors detected light from the star Arcturus, light which had left its origin at approximately the time of Chicago’s 1893 Columbian Exposition. The exhibition was known for its brightly-colored Art Deco Rainbow City and the Sky Ride, which took visitors on a stylish and exciting elevated trip over the fair.

Most of the holdings in the Cooper Hewitt’s collection are visitor guidebooks, souvenir books, and a book series on science topics ranging from anthropology to zoology. While some of these are less related to design, many offer illustrations, and background about specific buildings, exhibitions, events, and tips for experiencing the city.

Much of the fair and its ephemera relate to the industrial production of consumer goods that are representative of the fair’s theme, progress. Products like sugar, tires, and household appliances exhibited by the manufacturers highlighted the technology and global success of each brand. Art Deco themes are evident in the graphic treatment of these publications but also in the design of the exhibitions.

The 1937 Exposition Internationale des Arts et Techniques dans la Vie Moderne’ (International Exhibition of Arts and Techniques in Modern Life) was the largest in scale that Paris had seen. Notably, the fair dedicated entire pavilions to emerging materials like aluminum and plastic, and architecture and design techniques embraced the continually popular, modern style.

The library contains a collection of several primary sources concerned with the decorative arts at the 1937 Paris fair. By far, the most comprehensive of these is a book called Purpose in Design by Amelia Defries, which emphasizes craftsmanship over the mass-production of decorative arts. Organized by country and technique, this book helps demonstrate the widespread influence of Art Deco across the globe and throughout different mediums.

Catalogs featuring innovative designs and their installation kept in step with the 1925 Paris exhibition, where furniture ensembles were the favored display technique. Two volumes of Ensembles Mobiliers, illustrate through photographs the variety of spaces, and decor that evolved from the original Art Deco style by 1937. 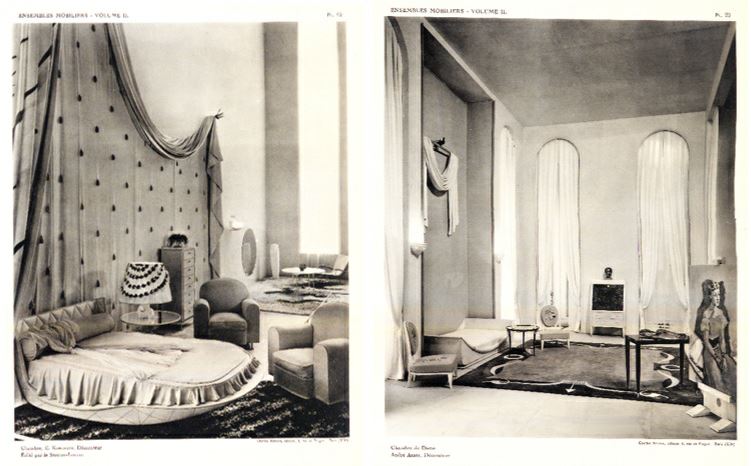 Figure 7. Left: Chambre by E. Kohlmann from Ensembles mobilies, v.2, Paris, 1937.
Figure 8. Right: Chambre de Dame by André Arbus from Ensembles mobilies, v.2, Paris, 1937.In 1939, New York hosted a fair that shifted the dialogue beyond modernity. The fair was dedicated not to past styles or contemporary advances but the future. At “the world of tomorrow,” the Trylon and the Perisphere served as the official symbols and stood massive at the fair’s center. Nearing the end of the Great Depression, people were ready to return to a more comfortable consumer lifestyle. Visitors enjoyed rides like the parachute jump and entertainment like the “Temple of the Jitterbug.” Designers, throughout the fair, used the Art Deco style to engage visitors with advanced and modern technology that was still familiar enough to bring back into their homes.

The Cooper Hewitt’s collection of this fair’s material is rich in guides, catalogs, and pavilion pamphlets sponsored by brands like General Motors, General Electric, Heinz 57, Ford, and more. These offer illustrations of exhibitions and products and are an excellent study for consumer and advertising culture at the turn of the 1940s. Through their pavilions, these companies demonstrated to audiences their products and ideas for the future. Many of these hallmarks of innovation remained highly-influenced by Art Deco.

Figure 9. Pages featuring the exterior of the Ford pavilion from The Ford Exposition, New York World’s Fair 1939.Ford approached the future in a similar way, through the motor vehicle. The pamphlet from the Ford exhibition in the Cooper Hewitt’s collection offers a view of the Art Deco inspired building, looks historically at the evolution of the automobile and offers an explanation behind the first moving mural, the Mobile Mural at the entrance to the Ford Building, discussing energy, industry, and the power of man.

Figure 10. Pages featuring the installations from the General Electric pavilion from The General Electric Building, New York World’s Fair 1939.General Electric’s pavilions celebrated and played with the new technology within its industry. Visitors could be televised, wowed by science discoveries, and entertained by the “Magic Kitchen” where appliances opened and closed their streamlined doors automatically.

Perhaps one of the more distinct Art Deco-inspired works at the fair was the Heinz Dome.  The dome’s exterior dons a tomato-red frieze by Domenico Mortellito of the agricultural scenes in both the eastern and western hemispheres. Inside the pavilion, Heinz condiment innovations shine next to a sculpture by Raymond Barger, which is a central feature at 65 feet tall. A blue and green terracotta tiled column stands behind figures representing the countries from which Heinz imports ingredients for its famous 57 varieties. It supports the “Goddess of Perfection” and her symbolic orb of light, viewed from below through a mirage of colors. While Art Deco heavily influences the core of this fountain, it also embraces modernism as well as consumerism, and it seemingly lands like a splash of ketchup on the pavilion’s floor.

These four significant fairs offer insight into the evolution of Art Deco by time, place, and industry. Still, it does not stop at what is featured here! The Cooper Hewitt’s World’s Fair collection has publications from the fairs in and between these years and around the globe. Many of these fairs focus on similar themes of industry, national development, art, architecture, and colonialism.

Though many of these publications are commemorative or general reports, they offer a look into different corners of the world and expose the furthest reaches of modernity via Art Deco style.

Pavilion guide from the Société des artistes décorateurs at the Exposition internationale des arts décoratifs et industriels modernes in Paris, France 1925. It includes illustrations of interiors with select photographs of the spaces realized. Designers are listed, available in French.

Official view book at the Century of Progress Exposition in Chicago, Illinois from 1933-34. Features illustrations and general information about the architecture, exhibitions, and entertainment. Includes illustrations that show the Art Deco era obsession with light and waterworks.

A folded pamphlet published by the National Sugar Refining Company of New Jersey that illustrates how sugar cane is refined and accompanied the company’s sugar exhibition at the 1933 Chicago World’s Fair. Available in English.

A survey of decorative arts, graphic design, and fine arts from the 1937 Paris World’s Fair. Organized by country and material with additional information on many of the designs. Available in English.

Photographs of the modern lighting exhibition in the Pavillon du Luminaire at the 1937 Paris World’s Fair. Images are of lighting fixtures and installation views accompanied by designers. Available in French.

Two volumes which include photographs of interiors with furniture, decorative arts, design, and art from the Exposition international de 1937, in Paris, France. Available in French.

Official guide book for the New York World’s Fair 1939-40 published by Exposition Publications, Inc., designed by Donald Deskey and edited by Frank Monaghan. Includes information about the fair and the zones it was divided into. Available in English.

A pamphlet for the Ford Motor Company exhibition at the 1939-40 New York World’s Fair. Illustrates and describes the architecture, exhibitions, murals, and more from the Ford Exposition pavilion. Available in English.

A pamphlet for the H.J. Heinz Company pavilion at the New York World’s Fair 1939-40. Illustrates and describes the architecture, exhibitions, decorative arts, and more from the 57 Heinz pavilion. Available in English.