Oliver Byrne, in the introduction to his The First Six Books of the Elements of Euclid of 1847, states that “the Elements of Euclid can be acquired in less than one third the time usually employed, and the retention by the memory is much more permanent.” To accomplish this, he used an innovative approach of employing geometric shapes and colors, instead of the traditional use of letters, for angles and lines, while also minimizing the text. The result was a remarkable specimen in the history of book design.

The diagrams were printed from woodblocks in the primary colors of blue, red, and yellow, along with black and white. The decorative, white initials on a black criblé background, which stand out for looking a bit old-fashioned in comparison, are thought to have been made by Mary Byfield (1794 or 1795-1871), an illustrator and wood-engraver who worked for both the publisher William Pickering and the Chiswick Press of Charles Whittingham II (nephew of the founder), the printers of this book.

Byrne asserts: “THIS WORK has a greater aim than mere illustration; we do not introduce colours for the purpose of entertainment, or to amuse by certain combinations of tint and form, but to assist the mind in its researches after truth, to increase the facilities of instruction, and to diffuse permanent knowledge” (words that echo James Smithson’s famous bequest that led to the founding of this institution).

But it is indeed the illustrations that make the work a triumph and why it is celebrated today. The production, which must have been quite a challenge to register the lines of type, initials and symbols in order to print correctly, results in visually delightful pages that recall the art of a later Matisse or Mondrian. Whether it successfully explains the foundation work on geometry by the ancient Greek mathematician is beyond this writer.

Oliver Byrne (1810-1880) was born in Ireland and resided for a time in the United States. He was a mathematician, civil engineer, military engineer, mechanical engineer, and, significantly, a school math teacher. The title page of The First Six Books of the Elements of Euclid proclaims that he is the “surveyor of her Majesty’s settlements in the Falkland Islands,” but apparently there is no evidence that he ever traveled to that South Atlantic archipelago.

There are several titles authored by Oliver Byrne following The First Six Books of the Elements of Euclid in the Smithsonian Libraries, including The Practical Metal-Worker’s Assistant of 1851; Mechanics: Their Principles and Practical Applications of 1853; and Treatise on Navigation and Nautical Astronomy of 1875. They are all pedestrian publications of the period, textbooks with a lot of words and a few black-and-white line drawings, showing nowhere near the imagination of his earlier work.

Attractive to those interested in the book arts, this first edition of Byrne’s Elements of Euclid has long been considered “collectible,” commanding high prices in the rare book trade. Ruari McLean wrote in Victorian Book Design & Color Printing (1963) that Elements of Euclid was “One of the oddest and most beautiful books of the whole century … a decided complication of Euclid, but a triumph for Charles Whittingham.” This was even before a resurgence in interest following the publication of Edward R. Tufte’s Envisioning Information (1990; there are several copies of this influential work in the Smithsonian Libraries). Tufte, the wildly popular Yale professor of statistical evidence, computing science and information design, explained the ingenious concept: “In a proof, each element names itself by consistent shape, color, and orientation; instead of talking about angle DEF, the angle is shown – appropriately enough for geometry.” The 2010 Christie’s auction of Tufte’s own library contained two copies of Byrne’s Elements of Euclid. Part of its illustration appears on the front cover of Tufte’s book.

There are now many online versions of the Elements of Euclid and a beautiful production from Taschen Books (2010, with an endorsement from Rem Koolhaas, the Dutch architect). It is ironic then that The First Six Books of the Elements of Euclid was a contributing factor in the bankruptcy of the firm of Charles Whittingham in 1853, when more than 75% of the title remained in stock. Perhaps the learning of Euclid as part of the well-rounded education was no longer valued.

The Smithsonian Libraries’ first edition of Byrne’s Elements of Euclid was acquired with the collection of the Burndy Library and is found in the Dibner Library of the History of Science and Technology. It has a neat penciled inscription, the passing of a copy on to a son: “Frederick D. Roberton, on his fifteenth birthday, from his father, March 4, 1891,” attesting to someone in the 19th century who still appreciated learning Euclid’s geometry. This copy has been digitized (link here). 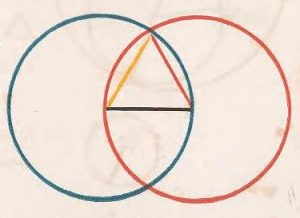