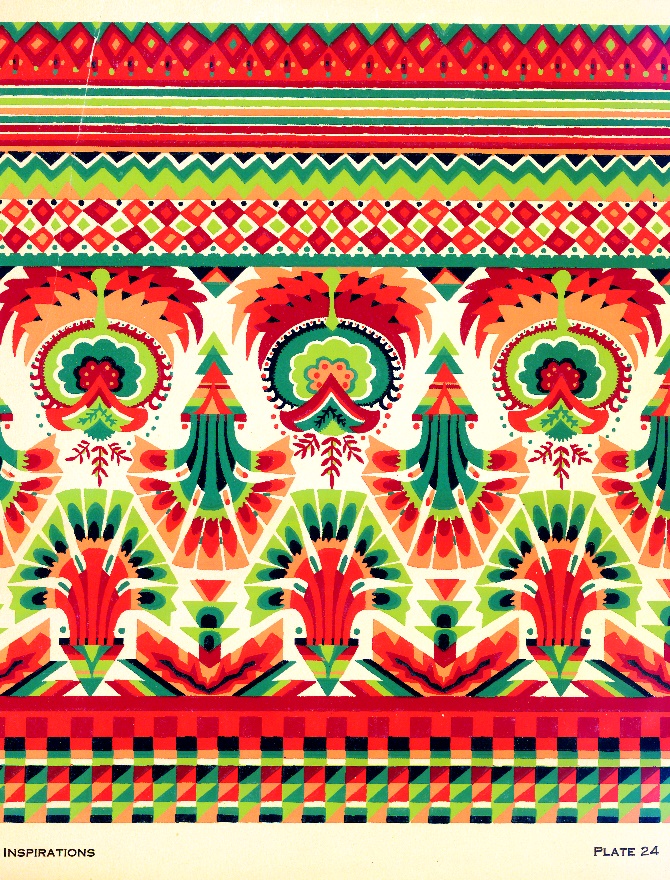 This is the fifth in a series of posts about the Art Deco resources at the Cooper Hewitt, Smithsonian Design Museum library. Each post will highlight primary resources which contain the styles and designs of the Art Deco era. These resources are divided into seven categories- world’s fair publications, interior and architecture books, trade catalogs, graphic design, pattern books, and picture files. This guide is not an exhaustive summary and these featured resources are just a portion of what awaits Art Deco enthusiasts and researchers in the Cooper Hewitt library collection. We are grateful to Jacqueline Vossler and Joseph Lundy for their generous support of this project.

At the 1925 Paris Exposition, graphic design’s place in modern culture was recognized with a whole area devoted to the subject. Throughout the Library’s collection of World’s Fair materials, we see examples of Art Deco style in commemorative publications from the national and commercial pavilions alike. These publications became early vehicles for dispersing the design style.

Specific examples are featured here, yet this does not even scratch the surface of what there is to explore in the Cooper Hewitt’s collection. The images above are from the World’s Fair ephemera collection, discussed earlier in this blog series. The graphics at these fairs did not stop at the cover designs of souvenir books, though. Researchers can explore the style further in the ads and reports compiled by consumer product brands at the time.

The Art Deco style soon graced book covers too. Within the Cooper Hewitt’s collection, several novels give an idea of the early 20th-century style but also what captured the attention and imagination of its readers from the 1920s or 30s.  Books depict on their covers the fast-paced and lavish urban lifestyles that filled their pages.

Art Deco’s balanced and geometric structure echoed throughout advertisements, book covers, buildings, trade catalogs, design, and decorative objects. Evidence can be found in books like Répertoire du gout moderne, which shows how pervasive these graphic trends were on design objects. Below are rugs with anonymous gymnasts gracefully soaring across rugs.

Art Deco’s flattened and abstracted aesthetics traveled internationally and encouraged growing appreciation towards abstraction as a universal ideal for communication beyond language. Many designers embraced these changes while finding an appropriately cosmopolitan way to capture the atmosphere. André Durenceau, a celebrated French illustrator who moved to Los Angeles in the late 1920s, published Inspirations around the time he arrived in the United States. The diverse portfolio displays his ability to work in the latest Art Deco style with bright colors, geometric shapes and exotic world influences.

Official catalog for the Exposition internationale des arts décoratifs et industriels modernes in Paris, France 1925. It includes illustrations of the decorative arts specifically featuring that of Spain, Italy, and the Yugoslavian theater. Available in French.

Official souvenir guide at the Pacific Southwest Exposition in Long Beach, California from 1928-9. Features illustrations and general information about architecture, exhibitions, and entertainment. Includes illustrations that show the Art Deco era obsession with light and waterworks. Available in English.

Official souvenir guide at the Exposición Internacional in Barcelona, Spain, 1929. Features illustrations and general information about architecture, exhibitions, and entertainment. Available in Spanish.

A romantic fiction novel with a book jacket in the upmost Art Deco style attributed to Victor Beals.

A novel ruminating on the life and worldly behaviors on display in 1920s New York with a book jacket attributed to Paul Wenck.

The story of a magician who no longer can decipher what is real and what is an illusion. Book jacket designer is unknown.

Five volumes of illustrations featuring interiors and various ensembles of furniture and decorative arts. Many instances of the same space with different decorative design schemes.

Twenty-four plates with 128 illustrated compositions by André Durenceau. Featuring a diverse array of patterns from the increasingly connected world of the 1910s and 1920s.